Banana bread is a classic. Affordable and easy to make (you can get away with using one bowl for so many recipes), so many families have a recipe passed down from generation to generation. But what happens if you’re avoiding animal products? Thankfully, making vegan banana bread is not only easy but also a great way to start a new tradition.

Replacing Eggs and Dairy In Baking

In traditional baking, eggs play a critical role in creating structure and stability as well as adding moisture. Egg yolks, in particular, bind liquids and fats together, resulting in an even batter. But eggs aren’t necessary to make banana bread.

The use of milk also varies by recipe. In baking, milk proteins give soft structure to cake and contribute to the final flavor. Most vegan recipes replace dairy with almond or soy milk, which has a protein content that’s close to milk. 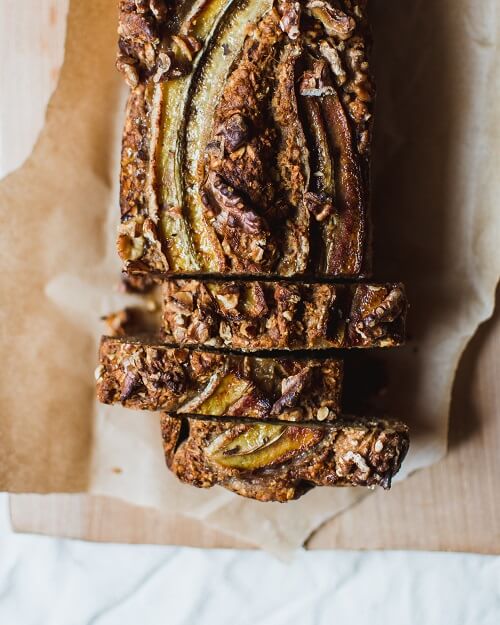 How do you make the best vegan banana bread?

Baking is a science. Your vegan banana bread may turn out perfect one time but the next, you might find its texture to be a little rubbery. Here are some easy tips in making sure that your baked goods turn out great every time.

First, have the right bananas. Ideally, there should be no green skin and a smattering of brown spots. If you prefer a richer flavor, go for a darker sugar like coconut. Whether you leave a few banana chunks in your batter or go with a puree is a matter of preference. If you like the latter, mash the banana in a separate bowl. Remember to preheat your oven and prepare your baking pan ahead of time. Some recipes call for parchment paper.

It’s important to work fast with flour that contains gluten—overworked flour can give banana bread a chewy texture. Stir the ingredients together—by hand or by mixer—until just combined. Pour evenly into your prepared pan, smooth the top with a spatula, and add toppings (if using).

As for which type of pan to use, light metal, dark metal, and glass pans have a few key differences. A Food52 baking experiment found that a light metal ban yielded a softer bread that lost most of the crumb on the bottom. Dark metal lost less crumb while the glass pan banana bread had an even bake. Let your banana bread cool for about 15 minutes before removing it from the pan. Allow it to cool completely on a wire rack.

Use your favorite banana bread mix-ins, like walnuts, blueberries, or chopped strawberries. For chocolate chips, look for a dairy-free or vegan version.

How to Make the Best Vegan Banana Bread 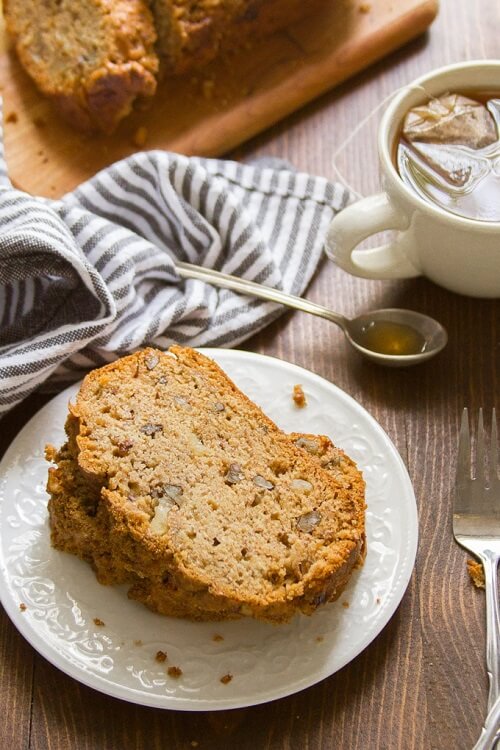 Perfectly sweet, fluffy, and topped with a melt-in-your-mouth brown sugar crust. Not only is this classic vegan banana bread easy to make, but it’s also customizable. This version adds walnuts into the batter, but you can also opt for chocolate chips, blueberries, or sliced strawberries. Use a glass pan and parchment paper for best results. It’ll be hard to resist waiting for this to cool down. 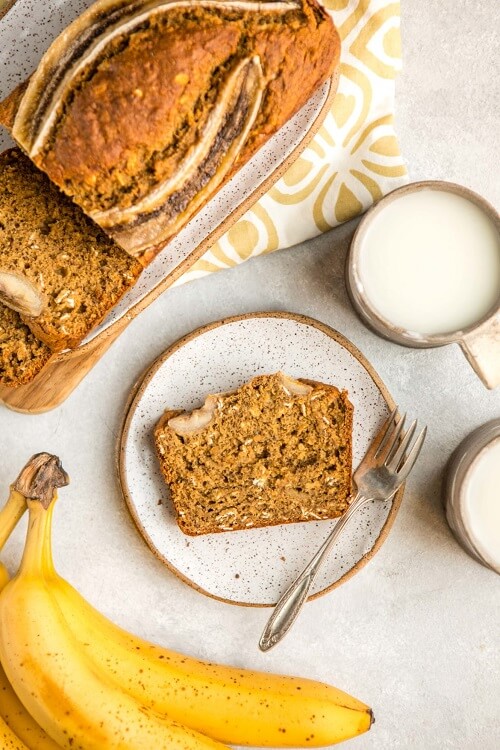 Use a strong blender to turn oats into flour. | From My Bowl

Oat flour—DIY or storebought—replaces all-purpose flour in this gluten-free and vegan banana bread. to make oat flour at home, pulse the oats in a high-speed blender. Instead of oil, this recipe uses nut or seed butter, giving it a denser texture that makes it good for pairing with coffee for breakfast. Top with a banana sliced lengthways for presentation. This works best with a dark metal pan. 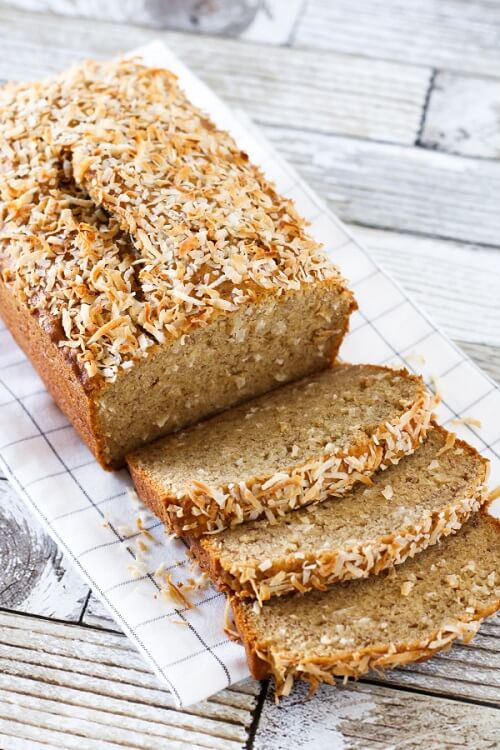 This gluten-free vegan banana bread is made with coconut sugar, giving it a sweet, slightly caramelized flavor that complements the crunchy toasted coconut. Enjoy a slice topped with nut butter and a cup of coffee or tea for breakfast. 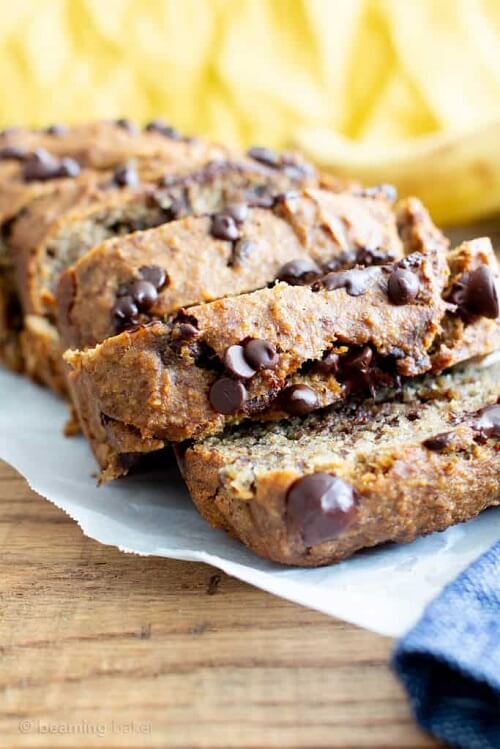 Proof that the simple things in life can be great. This one-bowl vegan banana bread is made from oat and almond flour and packed with dairy-free chocolate chips. Be sure to have a slice while the chocolate is still a little bit melted. 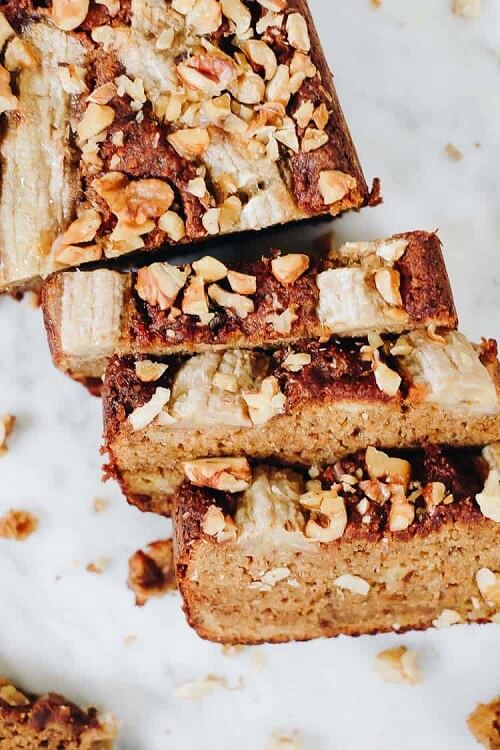 Paleo baking usually relies on eggs, but even it can be made vegan. This grain-free banana bread is made from almond flour and tapioca starch, giving it a denser texture. Make it plain or decorate the top with sliced banana, chocolate chips, coconut, or nuts. 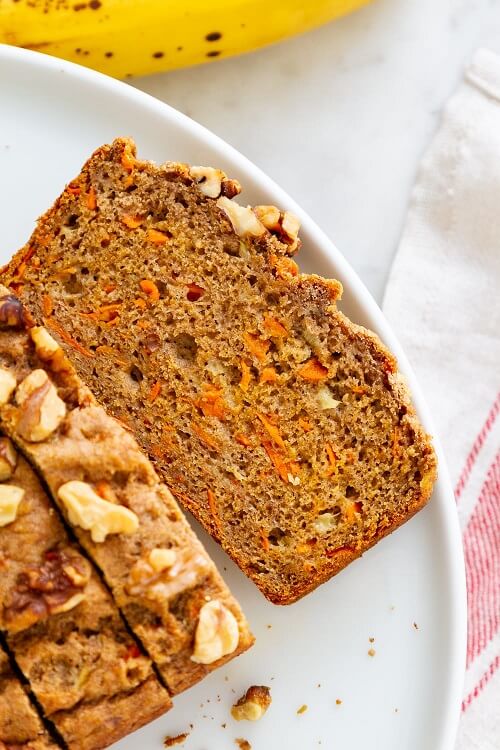 Put a new spin on banana bread. | The Simple Veganista

You’ll want a slice of this vegan carrot cake banana bread for breakfast or a snack all week long. The batter itself can also handle dried fruit and nuts well, so you can experiment with add-ins like cranberries and walnuts. 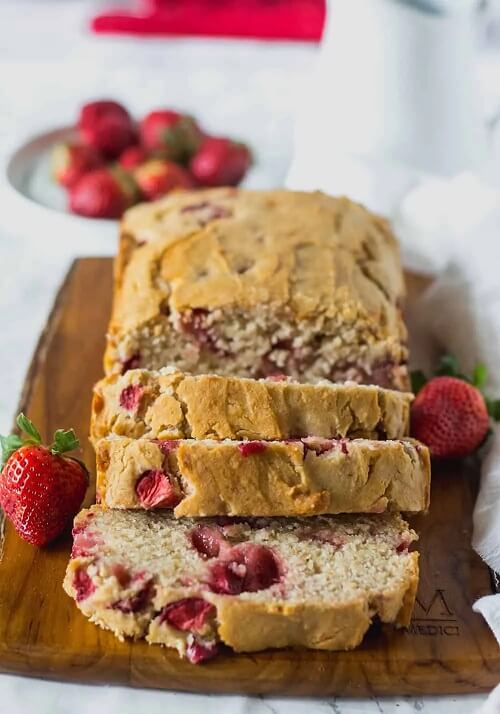 Bursts of strawberry make this easy vegan strawberry banana bread recipe that much sweeter. Remember to chop the berries small for even distribution throughout the batter. Keep the top plain or add toasted coconut.