You’re likely already pretty familiar with cotton. As one of the most widely-used textiles in the clothing industry, most of the items hanging in your wardrobe are probably made from it. But for something so familiar, there’s a lot many of us still don’t know about cotton. How is it produced? Is it bad for the environment? Is it bad for people? And, when you’re shopping, is it better to opt for organic cotton? So many questions. Let’s try to answer a few.

A Brief History of Cotton

Originally produced in India—as far back as 5,000 B.C—cotton is now used and worn all over the world. Approximately 27 million tonnes are produced every single year.

Made with natural fibers from cotton plants (they look like little fluffy balls), cotton is soft and versatile. To make it into a wearable fabric, the natural fibers are spun into yarn.

Thanks to some innovative manufacturing developments, the mass production of cotton started during the British Industrial Revolution. In the 1760s, the spinning jenny, a multi-spindle spinning frame, was invented. It helped revolutionize the industry, and, according to Historic UK, by the beginning of the 1800s, cotton products made up roughly 42 percent of Britain’s exports.

But it wasn’t to last. While Britain was a driver of the mass production of cotton, nowadays, the U.S., China, and (once again) India dominate the industry. 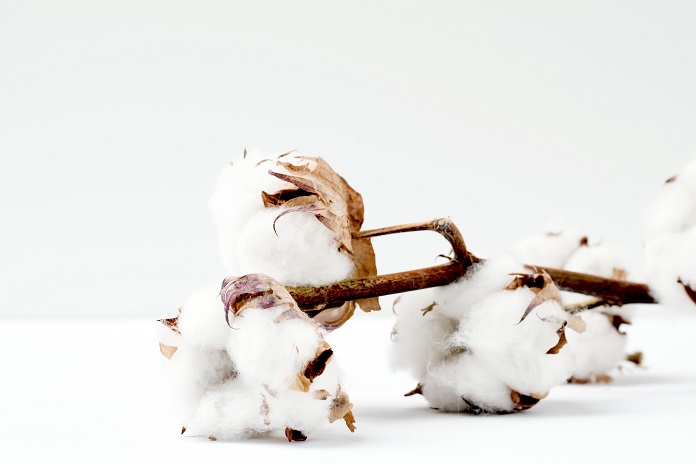 How Is Cotton Produced?

There is more than one way to harvest cotton. In the early days of production, the crop was extremely labor-intensive and was picked and separated by hand everywhere.

Now, some countries, like the U.S., rely on machinery to harvest cotton. Mechanical pickers and strippers are used. The former picks the cotton ball from the plant, leaving the rest in the ground. The latter strips the cotton balls, as well as the leaves and stem of the remaining plant. Both can harvest around six rows of the crop at a time.

However, while there have been developments in machinery, in many countries cotton is often still picked by hand. This isn’t necessarily always a bad thing. Organic cotton, for example, is almost exclusively hand-picked; this ensures higher quality, as none of the fibers are damaged in the process. Organic cotton is also far kinder to the environment (more on that later).

But in some cases, hand-picking leads to exploitation. According to a report by the BBC, in 2014 more than 400,000 children worked on India’s cotton farms. Children are sometimes used because they have smaller fingers, but also, according to one farmer, their work ethic is better.

Venkatram Reddy, who has a farm in Andhra Pradesh, told the BBC: “It is not possible with adults. They don’t work as hard and don’t come on time. Although we pay them both the same wages, it is children who work sincerely and honestly.”

Child labor in cotton is not exclusive to India. In 2016, a report by the U.S. Department of Labor found child labor present in cotton production in 18 countries, including China, Uzbekistan, and Brazil.

While many brands and retailers state they do not knowingly buy cotton harvested using child labor, it can be very difficult to trace. The BBC notes that cotton can change hands a number of times before it reaches the factory to be processed into clothing.

However, there is a way you can ensure your cotton is produced ethically. When you buy certified fair trade cotton, much of the crop may still be picked by hand, but the workers are treated fairly, and child labor isn’t used. Make sure you look for official fair trade certifications, like this one here.

Is Cotton Bad for the Environment?

While the cotton industry may have once been the pride of the British Empire, much like the latter, it has an ugly side. In addition to child labor and exploitation, this soft and fluffy crop takes a significant toll on the environment. Excessive cultivation depletes and degrades the soil, and uses huge amounts of water.

According to the WWF, it takes 20,000 liters of water to produce 1 kilogram of cotton. To put that in perspective, that’s the equivalent of running 133 baths just to produce one t-shirt and one pair of jeans.

Using this much water is incredibly wasteful, especially when you consider that the majority of the crop is grown in countries facing water scarcity. In India, for example, water stress is rated highly. This means that the country is running out of both ground and surface water. More than 160 million people in the country cannot access safe water.

But in the last crop year, the country produced more than 6.4 million metric tonnes of cotton. According to The Guardian, in 2013, the water used for India’s cotton exports could have supplied 85 percent of the population with 100 liters every single day for a year.

In Central Asia, cotton water use is also an issue. The Aral Sea, which used to lay between Uzbekistan and Kazakhstan, was once the fourth-largest lake in the world. Now, it’s nowhere to be found. The lake, previously home to 24 species of fish, completely dried up six years ago, in 2014. Much of the lake’s water was used by Uzbekistan’s cotton industry. 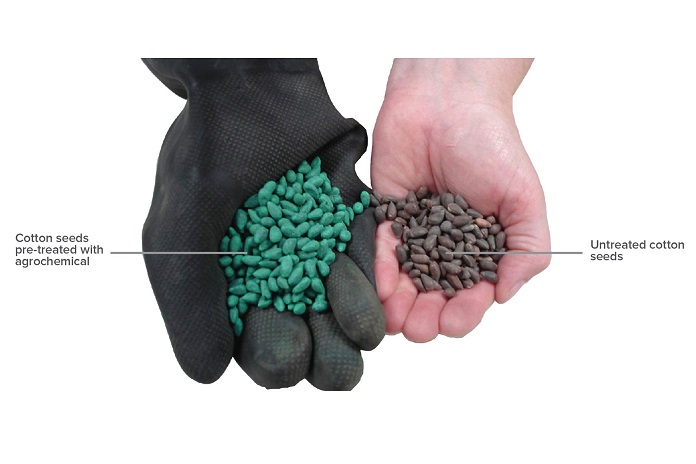 Conventional cotton is treated with chemicals that harm both humans and the planet. | aboutorganiccotton.org

Potent chemicals are used to treat cotton. While the conventional cotton industry covers 2.6 percent of the world’s land, it uses 6 percent of pesticides globally, as well as 16 percent of insecticides. Polluted water from the industry runs into rivers and other waterways, harming not just marine life, but human beings too.

The drying of the Aral Sea was a disaster for the surrounding communities. The Guardian reported in 2014 that dust, contaminated with salt and pesticides previously absorbed by the lake, was blowing into nearby villages causing higher rates of throat cancer and respiratory diseases.

Environmentalist and sustainable fashion designer Katharine Hamnett told the newspaper at the time: “As Vandana Shiva said, ‘no species has deliberately designed its own extinction,’ but with industrial agriculture we have.”

She added: “The fashion industry is one of the most polluting industries in the world, causing human misery, enormous cost of life, and gigantic environmental devastation.”

Is Organic Cotton Better for the Environment?

Organic cotton isn’t perfect, as it still uses up resources, but it’s far better for the environment than its conventional counterpart.

According to About Organic Cotton, a resource funded by the textile sustainability nonprofit Textile Exchange, it uses 88 percent less water than conventional cotton. According to environmental activist group Hubbub, it’s up to 91 percent less. That’s because most of it is grown in rain-fed areas, reducing the pressure on other water supplies.

Organic cotton is also kinder to the soil. According to the Organic Trade Association, when cotton is farmed organically, crop rotation strategies and soil building practices are used. This keeps the soil healthy, which in turn is good for the climate. Healthy soil helps pull carbon from the atmosphere.

Because cotton is a plant, it’s naturally biodegradable. But whether that process helps the environment or not depends on the type. When non-organic cotton biodegrades, all of the chemicals used to treat it go back into the earth, causing damage to local habitats. Birds and other animals may end up digesting the toxins.

Organic cotton, on the other hand, is untreated with chemicals. So when it breaks down, it’s less harmful to the earth. Organic cotton takes up to five months to biodegrade. Find out more about cotton and other biodegradable fabrics here.

How Do You Know If You’re Buying Real Organic Cotton?

So, how do you know the cotton you’re buying is really organic? It’s important to check for bonafide certification, not just the use of buzzwords like “eco-friendly.”

Global Organic Textile Standard (GOTS), for example, traces materials used in clothes to ensure they are processed sustainably. Organic Content Standards (OCS) offers a similar certification. Both track the chain of custody with transaction certificates, and the former also addresses social issues, based on guidelines from the International Labour Organization.

The rule of thumb when it comes to brands and environmentally-friendly materials? If they are officially certified, they will proudly tell you. Look for a section on sustainability on their website, and inspect labels carefully. Hint: if there’s no section on sustainability, it’s unlikely that the brand uses organic cotton or other environmentally-friendly materials.

Can You Recycle Cotton?

Looking to get rid of a cotton-based garment? There are a few things you can do. If the item is still in decent condition, there’s the obvious solution of donating or selling. Research local charity shops, or use resale apps like Depop or Vinted.

If the item is no longer in reasonable condition, you can also check with your local council, to see if they will accept the clothes for recycling. Some retailers, like H&M and The North Face, will accept old clothes to be recycled.

When it comes to recycling cotton, it is not a perfect process. According to CottonWorks, an industry resource, cotton has to be blended with other fibers to be made into new yarn. This is necessary for strength and durability but means cotton cannot be continuously recycled.

One answer is to buy products that are made to last. Organic cotton will last longer than conventional cotton because the quality is much better.

Right now, less than one percent of the cotton used around the world is organic. But Liesl Truscott, Textile Exchange’s director of Europe and materials strategy, says consumers can help to change this by showing demand and supporting the brands that do choose organic over conventional.

She told Vogue Australia: “We need the big companies to be investing in the supply and building demand. We need them to be continuously improving.”

It’s important to point out that organic certification does not always mean that all social issues in the supply chain have been effectively addressed.

She said: “Companies that sell their products in Europe and the U.S. have no clue where the organic cotton clothing comes from. Maybe they know their first supplier and there are codes of conduct in place, but further down the chain in the lower tiers it is very difficult to understand where the cotton comes from.”

Lotte Schuurman of the Fair Wear Foundation noted that it’s down to brands to try and ensure their supply chain is as ethical as possible, by creating supply registers and visiting each of their manufacturers.

Cotton is a complicated industry; it is fraught with issues, and we are far from achieving the perfect solution. But there are things you can do as a consumer to ensure you’re doing your part. For more information on how to shop sustainably, see our guide here.