Updated March 3, 2020. Pub chain JD Wetherspoon—commonly referred to as Wetherspoons or simply “Spoons”—is arguably a British institution. Need the perfect place to pre-drink? Wetherspoons is there for you. Craving a cheap curry? Curry Club has you covered every Thursday. Sunday brunch, Saturday night cocktails, a quick midweek family dinner – whatever you’re after, Wetherspoons can (most likely) oblige—as long as it’s cheap and cheerful.

Founded back in 1979 by Tim Martin—who has hit headlines recently not for his pubs, but for his controversial stance on Brexit—the pub chain offers a multitude of dishes. It caters to meat-eaters, people who only eat gluten-free, vegetarians, and of course, vegans.

“It’s most certainly a sign of the changing times when Wetherspoons has a dedicated vegan menu,” says Veganuary on its website. “…With almost 1,000 pubs across the UK and in the Republic of Ireland, it’s wonderful to know that a vegan meal is never far away.” 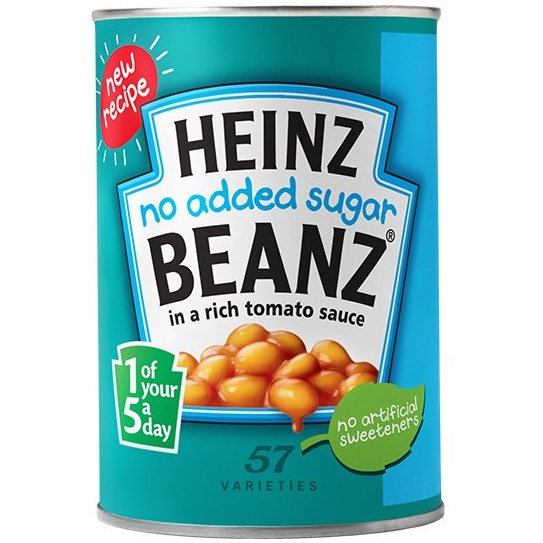 The pub chain’s animal-free menu is consistently growing. Up until recently, the company’s beans—Heinz’ No Added Sugar Beanz—haven’t been suitable for vegans due to their honey content. Heinz has now altered its recipe to exclude honey, meaning Wetherspoons’ diners can safely add beans to their vegan full English on a hungover Saturday morning.

It’s worth checking that your nearest location has swapped over though, as according to Heinz, the switch may take around a month.

The Vegan Kind announced the menu change on Instagram, much to the delight of social media users. “Great move,” said one follower. “Isn’t it crazy that we still have these animal ingredients in products when there is NO NEED! So frustrating in the whole but yeah slowly but surely going the right way!”

Another added, “I’m so happy … can finally have a Spoons brekkie that isn’t dry AF.” Others commented, “OMG big news” and “this is not a drill.“ 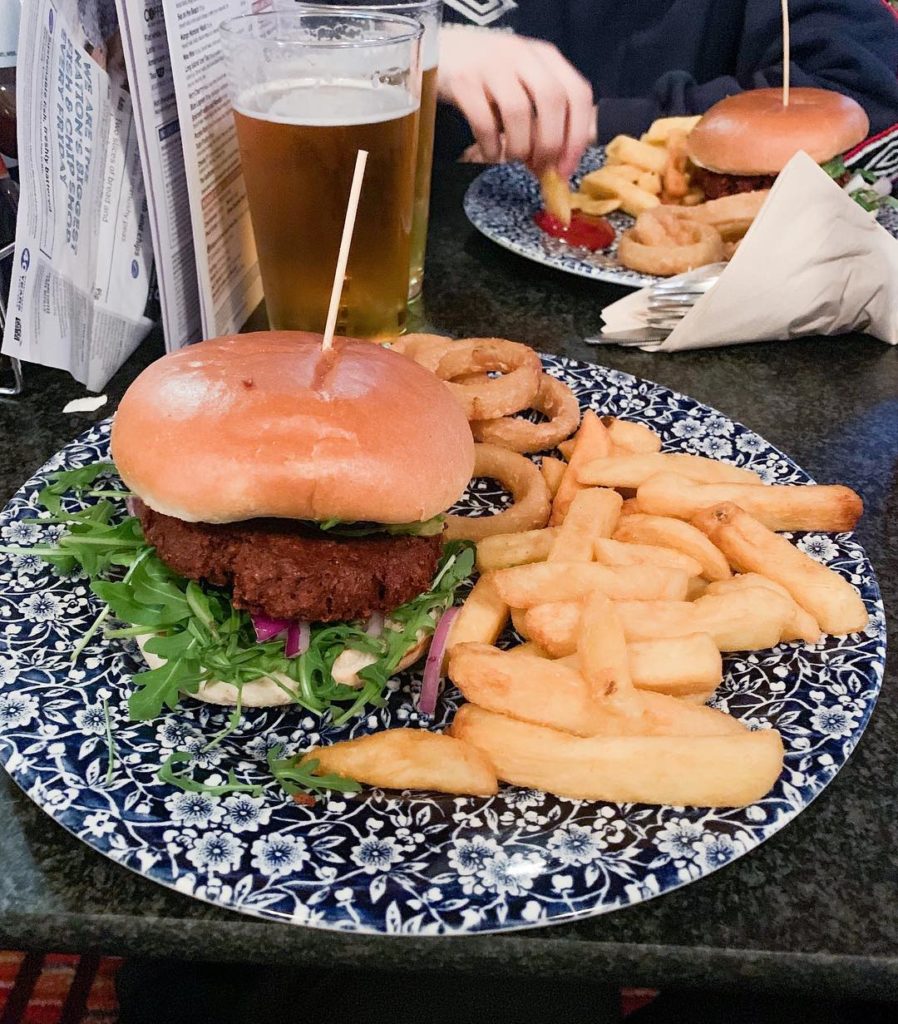 Wetherspoons offer a wide variety of vegan dishes, from salads to burgers. | @alice.eatvegan

There is a whole range of vegan meals on the Wetherspoons menu. But before you set off, it’s best to check in on the chain’s app to see if your local serves your favorite dish as not all of the vegan options are available in every pub.

From plant-based curries to dairy-free pizzas, here are all the vegan dishes you can eat at Britain’s favorite pub chain. 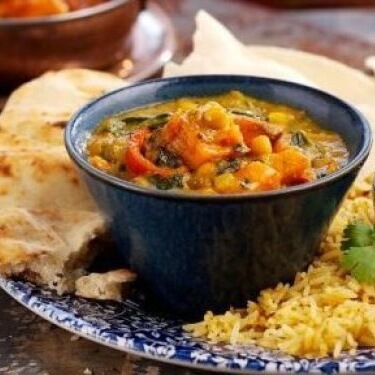 Wetherspoons’ Sweet Potato, Chickpea, and Spinach Curry is vegan if you order without the garlic naan.

You can order a pretty healthy-sounding veggie-packed curry at Spoons. It’s tasty, too, says the pub chain. “With careful blends of cumin, coriander, garam masala, and cardamom, our curries originate from traditional recipes in East Asia,” it notes on its website. “[The dishes] are designed to give you a taste of the exotic from the comfort of your local Wetherspoon.” If you’re after a bargain, head to the pub on a Thursday, when you can take part in Curry Club. To ensure the dish is vegan, boycott the garlic naan. 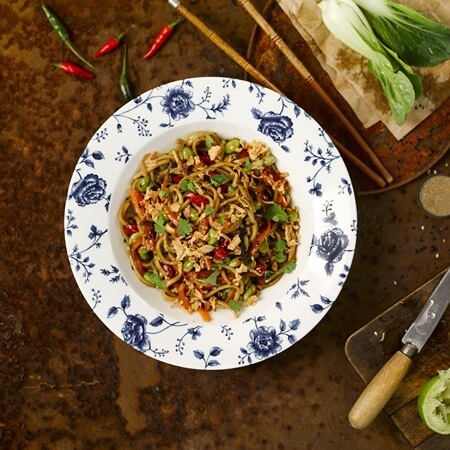 Wetherspoons’ Teriyaki Noodles are packed with veggies including carrot, red pepper, edamame beans, shiitake mushrooms, and crispy onions. The dish even won a prize from animal rights organization PETA (People for the Ethical Treatment of Animals) in its Vegan Food Awards. The meal—which is below 500 calories—won the award for “Best Vegan Noodles.” 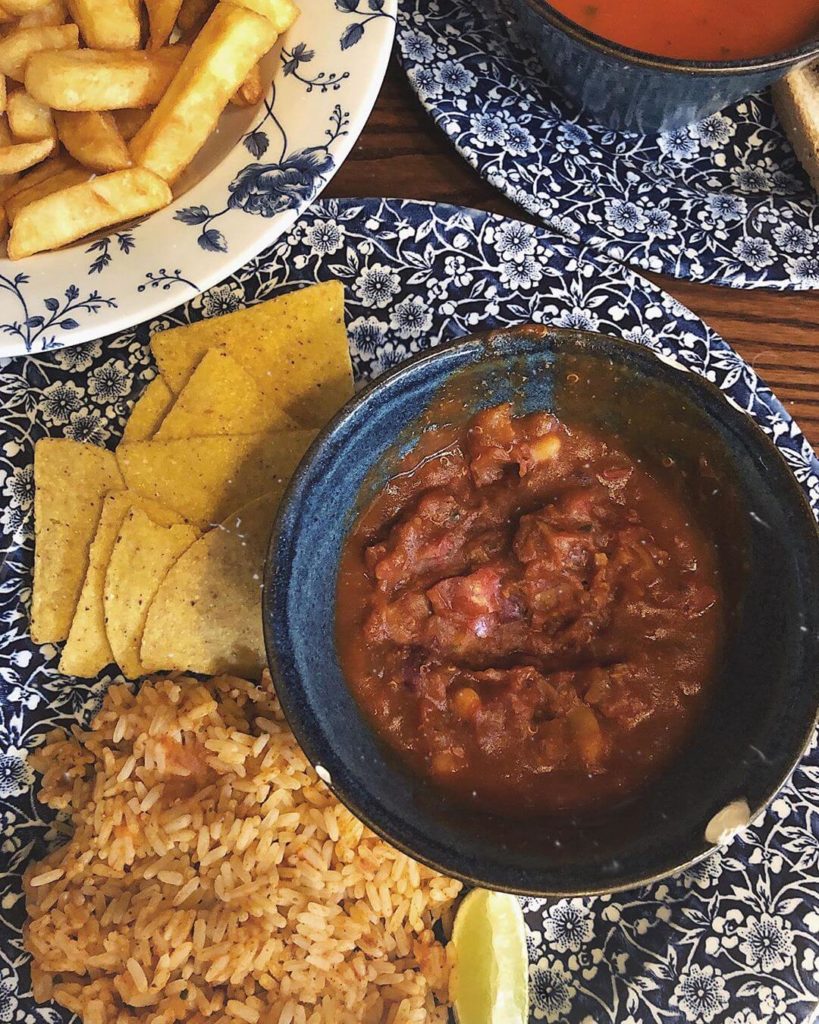 Enjoy Wetherspoons vegan chilli with nachos and rice or in a jacket potato. | @naturally_vegan

If you’re in the mood for a Mexican-inspired dish, Wetherspoons offers a vegan-friendly Five-Bean Chilli, complete with rice and tortilla chips. If you fancy something a little simpler, you can add the chili to a jacket potato. 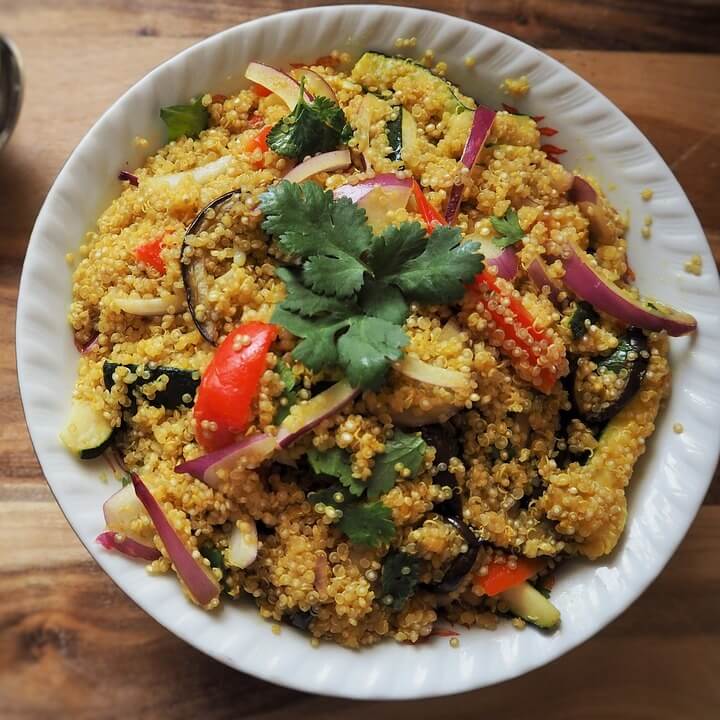 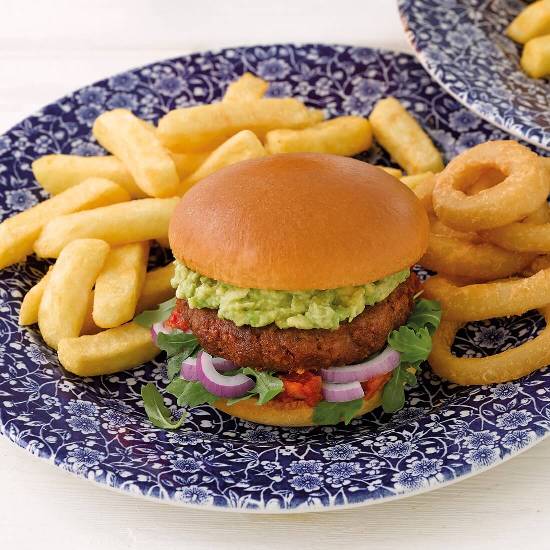 The Beyond Burger is available as a classic or gourmet, with extra toppings.

If you’re into good old fashioned pub grub, Wetherspoons has you covered with its Gourmet Vegan Burgers. Supplied by Beyond Meat, the meat-like patties are made with pea protein.

Wetherspoons serves the Gourmet Vegan Burger with avocado, salsa, and rocket. But if you prefer it plain, you can opt for the “classic” version featuring lettuce, tomato, and red onion. Both are served in a sourdough bun and available from March 11 2020.

“We are always on the look out for new and innovative products,” said
Jameson Robinson, Wetherspoon’s head of food. “Our Beyond burger offers a great new option for vegans and vegetarians,” continued Robinson. “As well as anyone wishing to reduce their meat intake, which is an ever-growing number.” 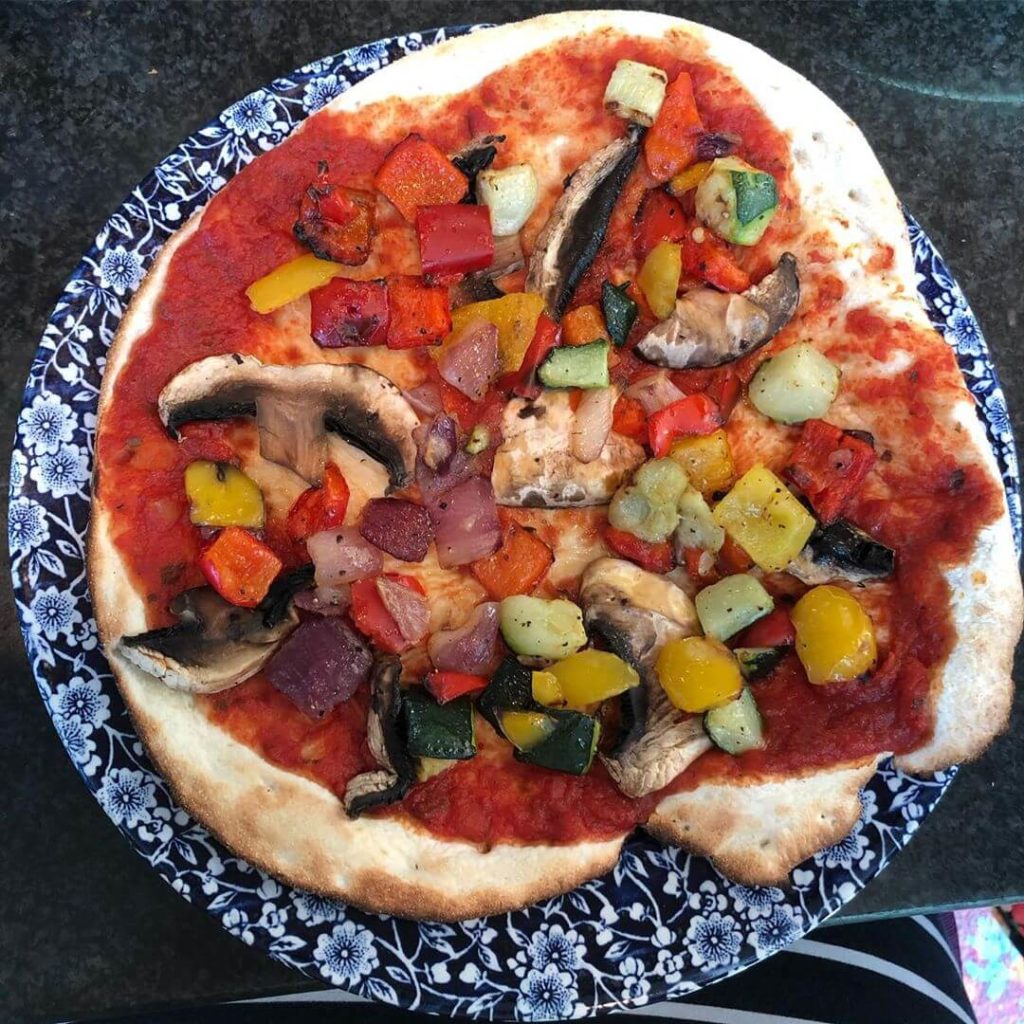 Wetherspoons pizza is cheeseless and topped with lots of vegetables. | @mybasicveganlife

My Basic Vegan Life wrote on Instagram about the pizza, “[it] has a really nice crust, although the base had gone a little soggy. There were also plenty of veggies on there and a good mix of them.” They added, “would recommend this though as a good wee meal which makes it so much easier if you’re going out with non-vegan friends and you all just want a basic meal and some drinks.” 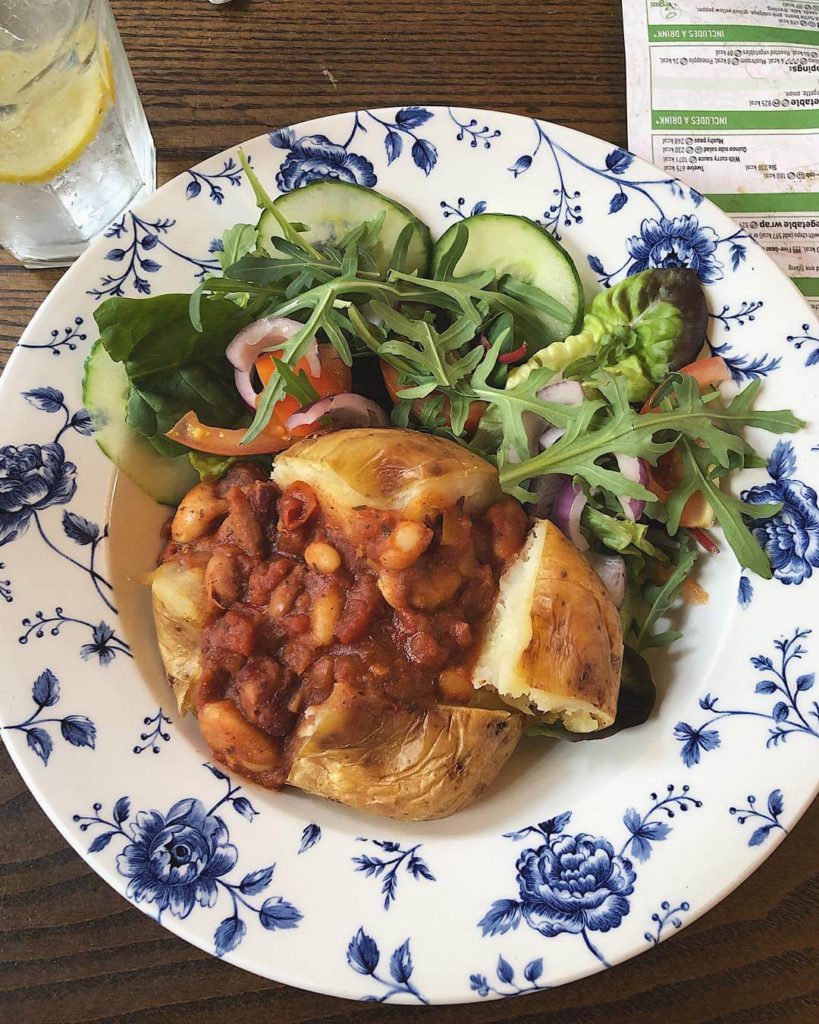 A handful of Wetherspoons’ jacket potato toppings are vegan. | @naturally_vegan

As well as Five-Bean Chilli, you can add a variety of vegan options to your jacket potato at Wetherspoons. Why not opt for baked beans or roasted vegetables? 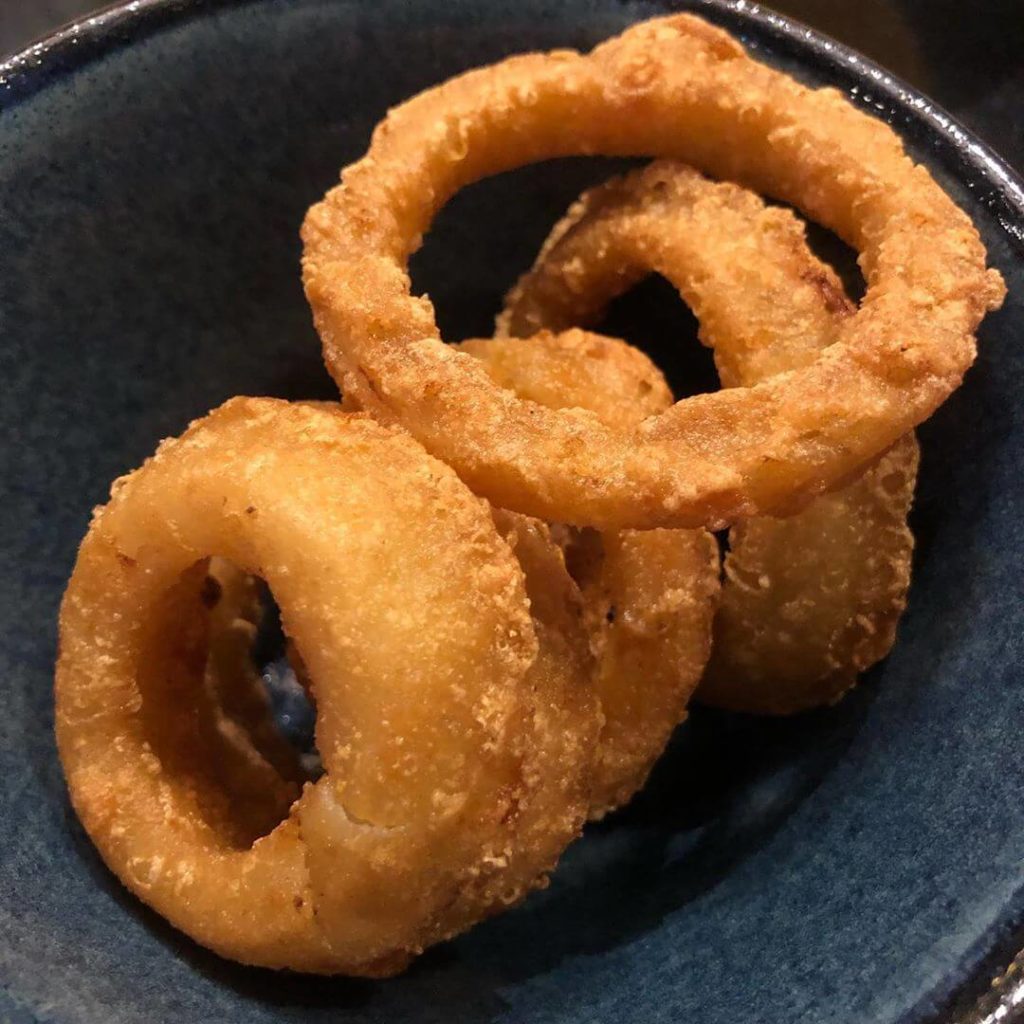 The onion rings at Wetherspoons are vegan-friendly. | @mybasicveganlife

Most can agree that a trip to Wetherspoons on a night out isn’t complete without some nibbles. As well as a bowl of chips, order your table a vegan-friendly portion of onion rings to share (or not, no judgment here). 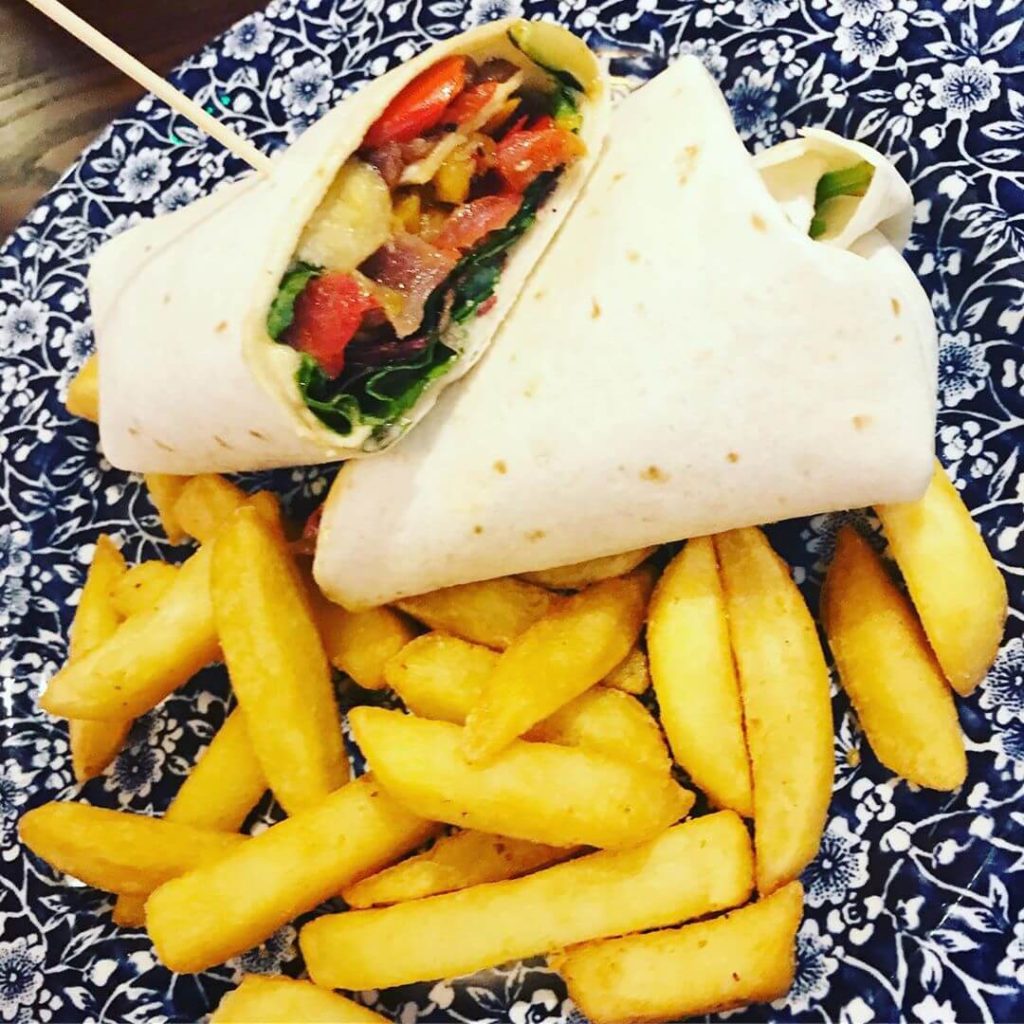 The vegan Houmous & Vegetable Wrap is ideal for a light lunch. | @veganbrandsuk

Looking for a light snack? The Houmous & Roasted Vegetable Wrap might be just what you need. Feeling a bit more peckish? Add chips, salad, or even a soup. 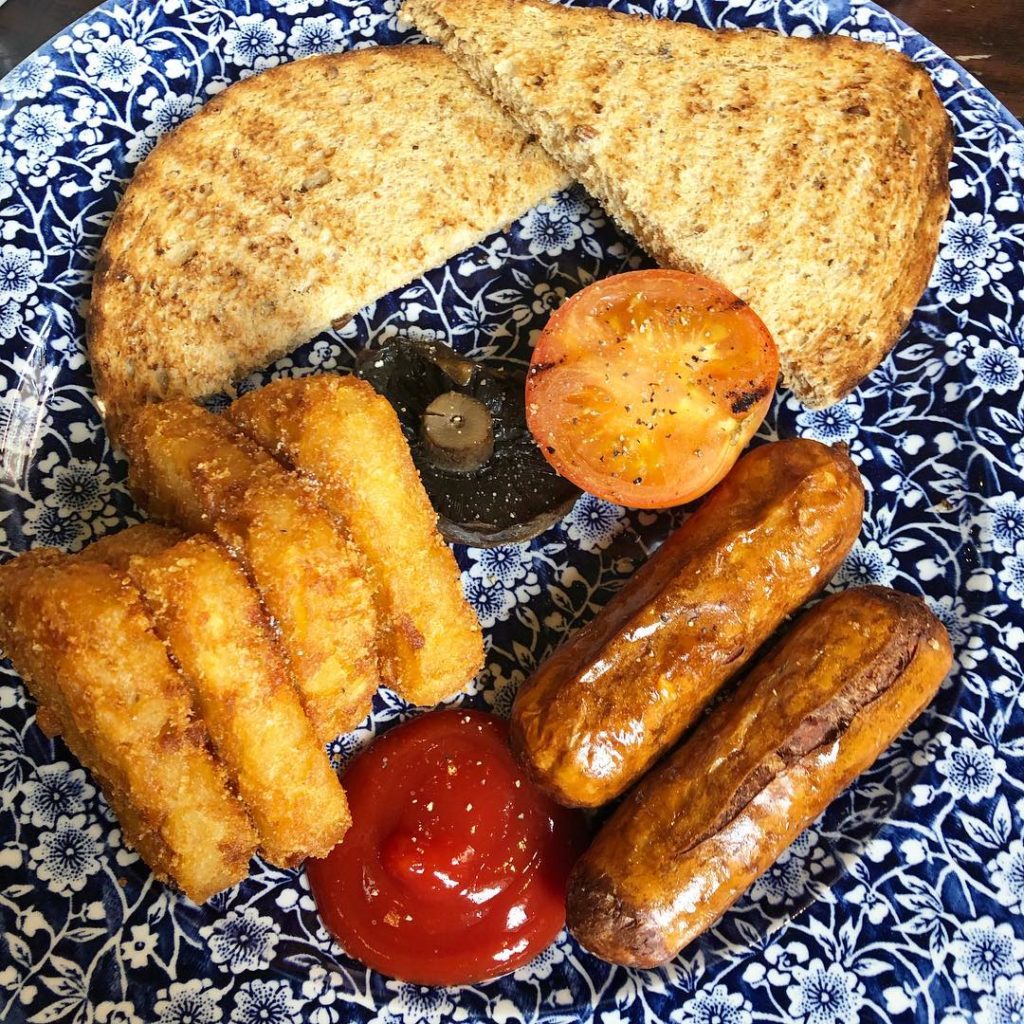 You can now order the vegan breakfast at Wetherspoons with beans too. | @thefoodyvegan

If you’re heading to Wetherspoons on a hangover, you can now order a vegan full English. It arrives complete with Quorn sausages, hash browns, tomatoes, mushrooms, and a slice of toast. If that all sounds a bit dry, you can now add beans. 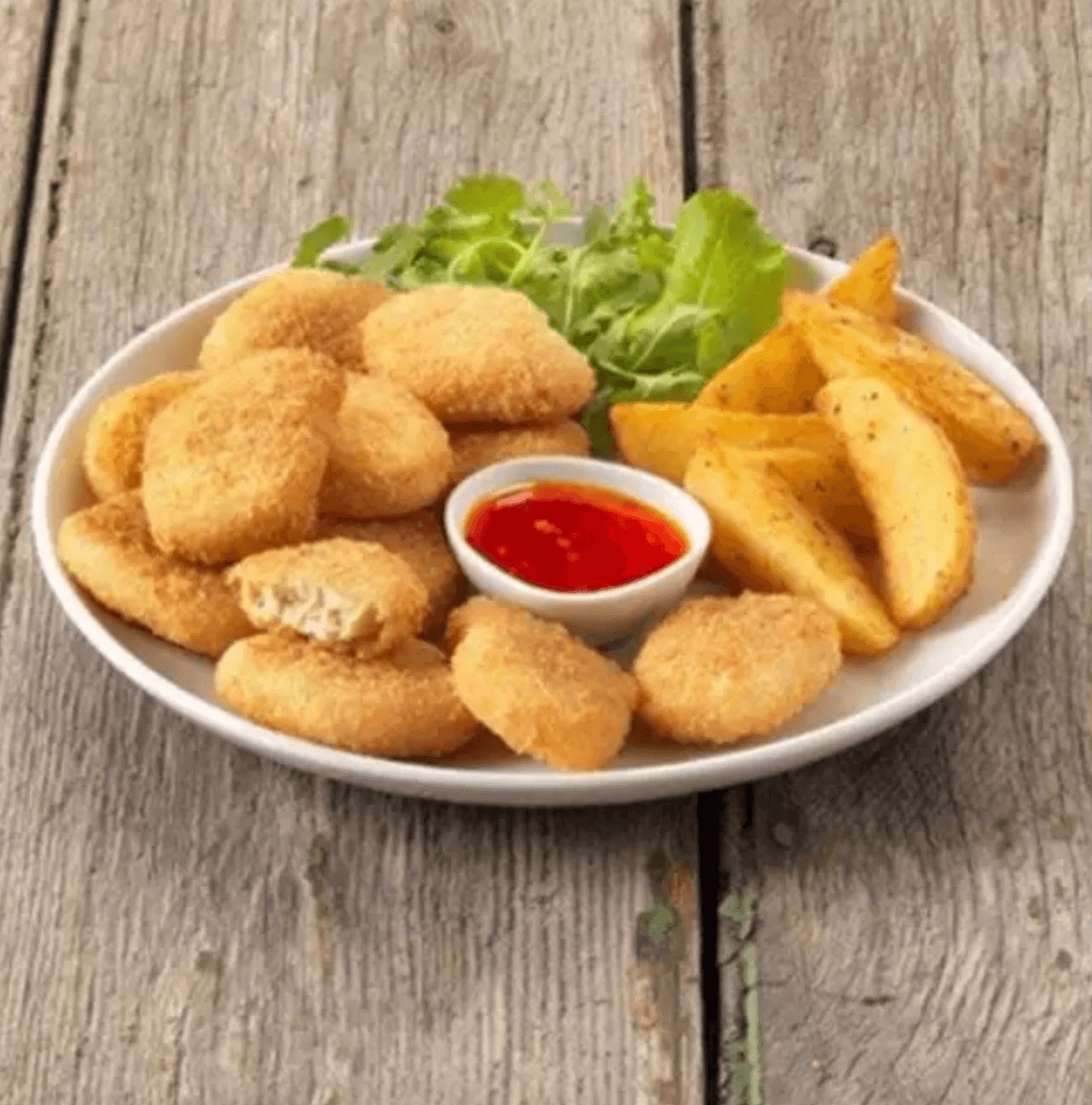 Spoons is trialing vegan Southern-fried chicken nuggets at 50 of its pubs. The meat-free nuggets are made by Quorn and are served with sweet chili dip. You can order them on their own or if you’re after something fancier, you can get them in a wrap with tomato, cucumber, and salsa. 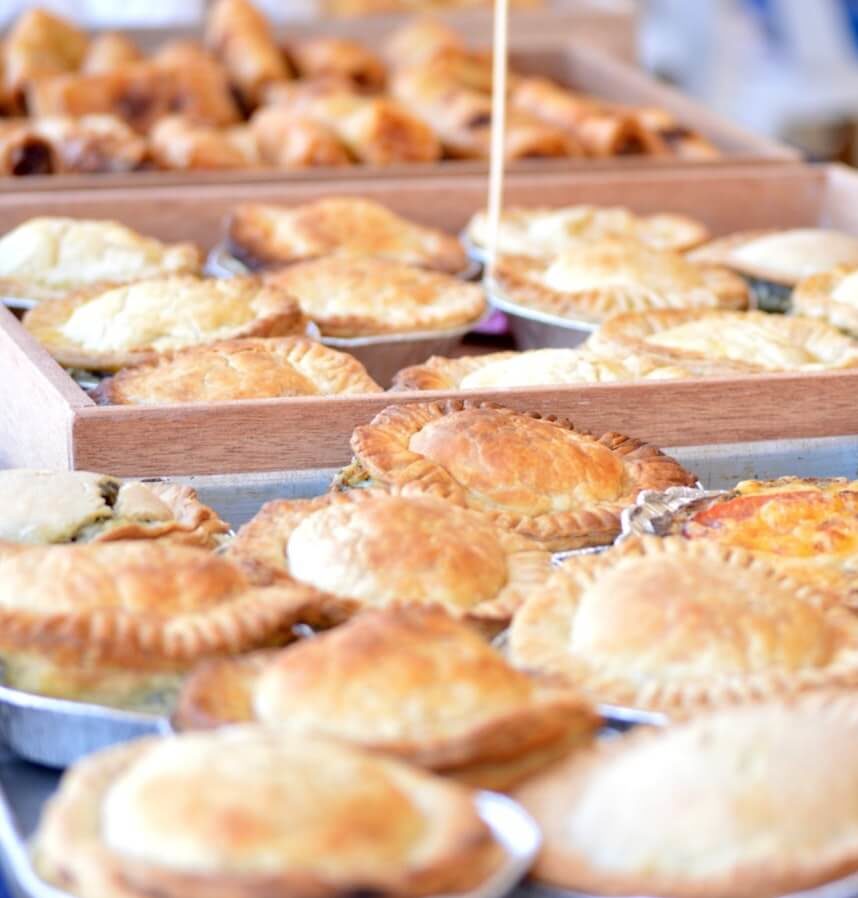 You can order vegan vegetable and mushroom pies at Wetherspoons.

As Britain heads into its colder seasons, Spoons has introduced a vegan mushroom and vegetable pie at some of its locations. Mushroom, parsnip, butternut squash, spinach, and vegan Sheese sauce are packed into a sage and onion pastry. The vegan pie is served with chips, peas, and gravy. 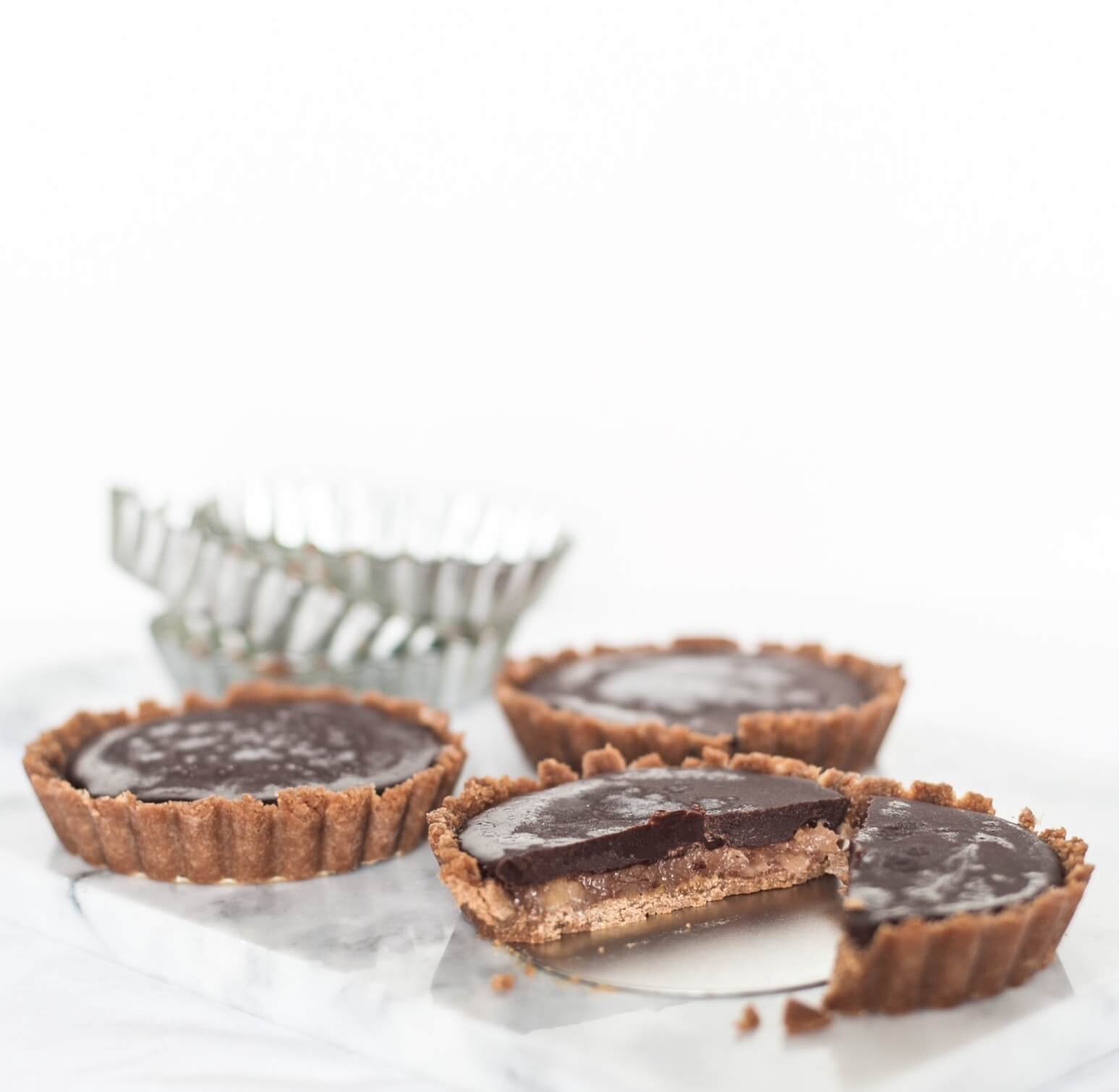 This vegan dessert features a chocolate cookie crust, chocolate and salted caramel filling, and dairy-free ice cream made with coconut milk and fresh strawberries. The only downside is that, for now, it’s only available at some Spoons pubs.