Hugh Laurie, CBE, says our responses to climate change and animal cruelty will be considered societal crimes 100 years from now. Laurie made the statement in a Tweet last month.

“For every hour we spend agonising over societal crimes of the past, we should probably allow a minute or two to wonder what we’re doing now that will be similarly condemned a hundred years hence,” wrote Laurie. “Climate, obviously; animal rights, likewise. What else?”

“I completely agree,” added Laurie. “That’s why I was suggesting that we look at the present as critically as we look at the past. Sometimes it’s good to imagine that we’re our own grandchildren.” 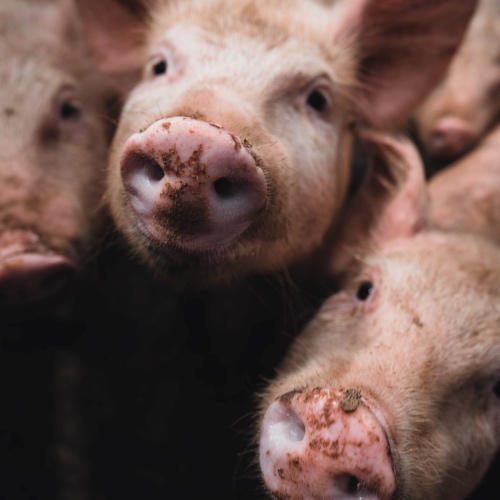 Attitudes to animal cruelty are changing, and young people are leading the way.

The Golden Globe-winning performer is well-known for his role on “House” from 2004 to 2012, and “Blackadder”, which ran from 1983 to 1989. But he may be best known for his comedy partnership with fellow comedian Stephen Fry, which endured through the 1980s and 1990s.

While Fry and Laurie’s careers may have gone in different directions decades ago, their values have stayed closely aligned. Fry is an outspoken vegetarian.

“I think it’s fair to say that there’s never been a better time to try cutting out meat and living a plant-based life,” Fry said in a statement for the Vegetarian Society’s campaign. “I’ve found it good for health and energy, and if we all joined in … well, wouldn’t the planet be pleased!”

Like Fry observed on the evolving definitions of terms like “milk”, Laurie sees a future where people may feel differently about where—and who—our food comes from. Young people, in particular, are currently leading the charge on social justice issues including animal rights and the climate crisis.

But as Laurie notes, the public perception of animal rights—and climate change—is already evolving. Consumer demand for vegan options is higher than ever before, and meat-eaters and flexitarians are increasingly likely to eat plant-based options.

Twenty million Brits—almost 40 percent of meat-eaters—say they are in the process of reducing their meat consumption. While the number of Brits who have eaten meat-free foods increased to 65 percent in 2019, according to Mintel.

Mintel also says that meat-free sales grew by 40 percent between 2014 and 2019. Consumers hope to save money, be healthier, and help the environment by ditching meat. And animal rights and ethics are also a concern for many of those making changes.