The limited-edition collection is described as “innovation meets responsible design” and offers sneakers in four naturally-dyed colors. Each shoe features Piñatex, lightweight recycled TPU (thermoplastic polyurethane) soles, a cotton-linen lining, and organic cotton laces. The company describes the new collection as “footwear that makes a minimal imprint on the planet and offers a sleek BOSS look.”

According to the company, the pineapple-derived leather is collected as a by-product of harvest — no other resources are used to produce the material and farmers are able to sell the leaves as an additional source of income. While Hugo Boss leather shoes are iconic in the luxury men’s fashion world, the collection represents the brand’s recent commitment to using more sustainable materials. 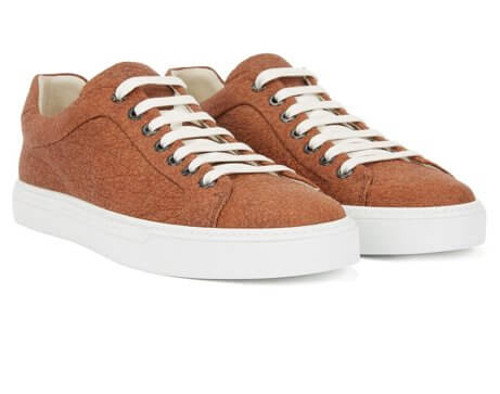 “Many of the recent innovations outperform conventional footwear. We are seeing more and more designers who are using vegan materials, creating designs that are innovative and cutting-edge and cool – very aspirational and desirable,” he added.

Following the success of its first vegan shoe line, Birkenstock expanded its cruelty-free collection with additional colors and designs. As well as this, popular alternative footwear company T.U.K. ensured that the majority of its latest collection was made with vegan materials.