The versatility of hummus has been tested in the past year. Chefs and restaurateurs have pushed the boundaries beyond the basic red pepper and edamame varietals, creating new and exciting foods such as nori hummus, dessert hummus, and even hummus shakes. One New York chain, however, is going even further. In celebration of National Ice Cream Day on July 15, The Hummus & Pita Co. will launch vegan hummus ice cream.

Like the company’s sweet non-dairy hummus shake, the hummus ice cream is “all natural” and made with “good-for-you ingredients.” It is also gluten-free and vegan. The four flavors – Chocolate, Cookies & Cream, Strawberry, and Banana Almond – are all made with a base of chickpeas, tahini, dates, and vanilla. A few additional ingredients are added to define each flavor and add creaminess to these dairy-free treats. The brand uses both almond milk and coconut milk to achieve the same creamy consistency as dairy-based ice cream.

The Hummus & Pita Co. Founder, Dave Pesso, said in a press release, “We were so blown away by the popularity of the Hummus Shake that we knew we had to keep inventing new treats.” He continued, “This all started when I developed the dessert hummus as a healthier alternative for my daughter, and the response from my family was so great that we wanted to share it with The Hummus & Pita Co. guests.” 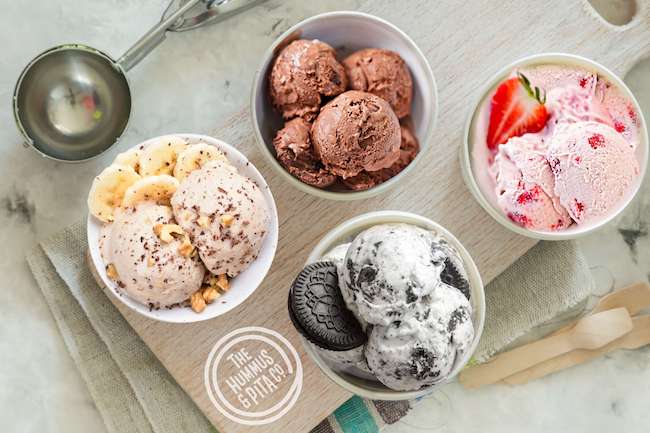 The humble chickpea has proved to be an invaluable ingredient in modern baking, and many companies are using it to recreate classic desserts. Beyond the hummus shake, chickpeas have been used to make blondies, brownies, and soft chewy cookies. Rule Breakers Snacks is a new vegan company that relies on garbanzos to make these baked goods, and all are vegan, allergen-friendly, and preservative-free. The company has even developed a birthday cake blondie which won Best of Show at the Natural Products Expo West 2018 Trade Show in March. Other small businesses have used chickpeas to make dessert hummus and natural cookie doughs you can eat by the spoon, with flavors ranging from classic chocolate chip to red velvet and snickerdoodle. Chickpea brine, or aquafaba, has also been a game changer for professional vegan bakers. When whipped, the brine forms stiff peaks that perfectly replicate the baking characteristics of egg whites, allowing bakers to veganize delicate desserts such as meringues, macarons, and pavlova.

Those curious to try hummus ice cream can get their fix at The Hummus & Pita Co. Chelsea location on July 15, and at the two other New York City locations beginning on August 1. The brand plans to expand to Denver, Colo. Brookfield, Conn., Bellworks, N.J., Detroit, Mich., and Los Angeles, Calif. in the future.