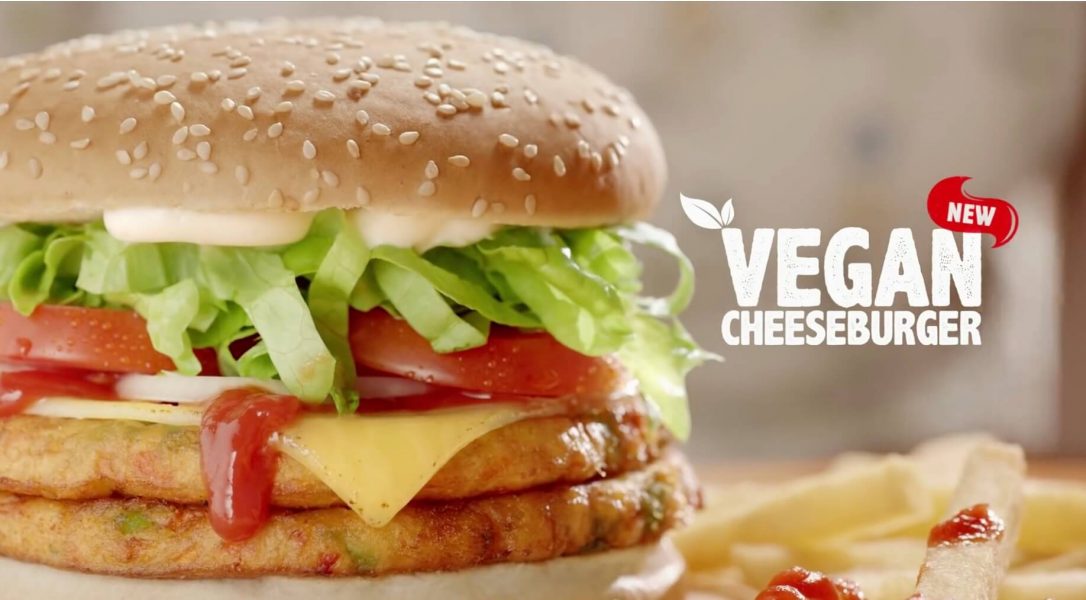 As vegan food becomes increasingly mainstream, more companies are choosing to feature it in commercials.

Australian fast-food chain Hungry Jack’s, a franchise of the Burger King Corporation, featured its new vegan cheeseburger in a 16-second commercial earlier this month. In the commercial, a couple is on a date and the woman is delighted to learn that she has a plant-based burger option. “New vegan cheeseburgers, ’cause everyone deserves a better burger,” says the narrator. The commercial marks Hungry Jack’s first-ever vegan advert.

After a successful trial run over the summer, the popular fast-food restaurant decided to add the vegan burger – which consists of two veggie patties, vegan cheese, eggless mayo, and greens – to the menu of all 400 locations throughout the country. It can be speculated that Hungry Jack’s corporate realizes the potential for its vegan burger will bring in strong sales from the Australian public, where over 50 percent of individuals have reported interest in reducing their meat intake.

Vegan food is being used in commercials, even when not the feature. Multinational American financial services company American Express, also known as AmEx, featured a vegan cake in one of its most recent commercials.

The commercial, which began airing last month, makes use of a custom cake from the vegan bakery Brooklyn Whiskers. The cat-themed bakery specializes in custom cakes as well as daily options such as doughnuts, scones, cookies, pies, and cupcakes, as well as a savory menu for breakfast and lunch. According to NYC-based food blog GrubStreet, the vegan bakery began as a wholesale operation in 2014, only to be closed down and reopened by former Champs Diner head baker Preesa Adeline Bullington in 2015. Brooklyn Whiskers now has two locations throughout the borough, one in Bushwick, and the other in Greenpoint.

In the commercial, an AmEx member decorates, then digs into, a cake with light blue dairy-free buttercream, with his partner. Brooklyn Whiskers took to social media last week to share the news, stating “So fun seeing one of our cakes in the new Amex commercial!”

While the commercial did not advertise the cake or the bakery, it may speak to the increasingly mainstream position of plant-based food in the United States, where sales of vegan food surpassed $3.7 billion last year.