Instagrammer @sheffield_vegans posted about the new plant-based option at the affordable supermarket chain last week. “Spotted some new items in the meat-free freezer in Iceland today,” they captioned the accompanying photo. The “No Duck Spring Rolls” comes with ten meat-free rolls filled with shredded jackfruit, vegetables, and hoisin sauce for £2.

Jackfruit, a large tropical fruit that looks like a large, oblong mulberry, has long been a staple of Indian and Southeast Asian cuisine. Its popularity in Western plant-based cuisine has surged in recent years due to its unique texture. When cooked, jackfruit can be shredded — similar to pulled pork — and its neutral flavor makes it versatile for use in a wide variety of dishes, like barbecue jackfruit sandwiches. 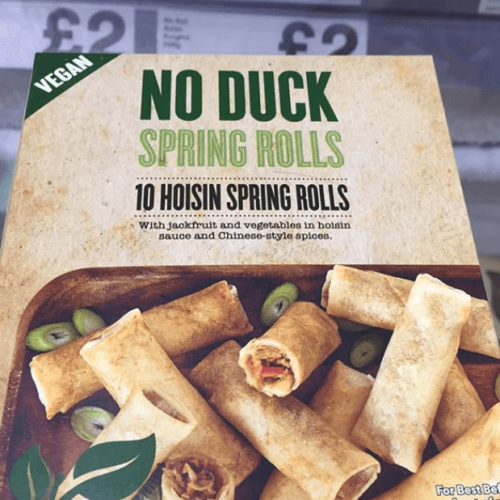 Iceland first introduced its realistic meatless range last year with the launch of its No Bull Burgers. Not long after the launch, the supermarket revealed that the meatless burgers outsold Wagyu beef. Iceland later expanded the range with more vegan  options including No Porkies Sausages and Chorizo Slices, No Bull Meatballs, and No Chicken Fillets.

Iceland chief executive Neil Nugent told The Sun in May 2018 that the chain wanted to target the growing flexitarian population: “We are trying to get those people who want to drop meat once or twice a week.”

According to Sainsbury’s, the second largest supermarket chain in the UK, 91 percent of British people identify as flexitarian now. Leading food publication Food Navigator noted last August that this isn’t just a passing trend — more people are changing their eating habits, primarily for health reasons. Supermarkets like Iceland, Sainsbury’s, Waitrose, and Tesco have been quick to capitalize on this by introducing own-brand vegan ranges, overseas products like the Beyond Burger, and items from emerging brands.

The vegan duck spring rolls are part of Iceland’s larger roll-out for a new wave of plant-based products. According to @sheffield_vegans, the affordable supermarket now carries meatless lamb koftas made from soy protein, mushrooms, and quinoa as well as No Bull Mince and Bolognese.