If we want to save whales, dolphins, and precious underwater ecosystems, we must stop eating fish.

Millions of fish are consumed around the world every day. One of the UK’s national dishes is fish and chips, traditionally consumed on a Friday night. In the US, a tuna fish sandwich is a lunchtime staple. Consumers can find salmon, sardines, hake, halibut, cod, and many other species of fish on menus and in supermarkets around the world.

But this insatiable appetite for seafood comes at a cost. Overfishing not only takes away the food supply of whales in many areas, but also the nets themselves pose a significant danger. 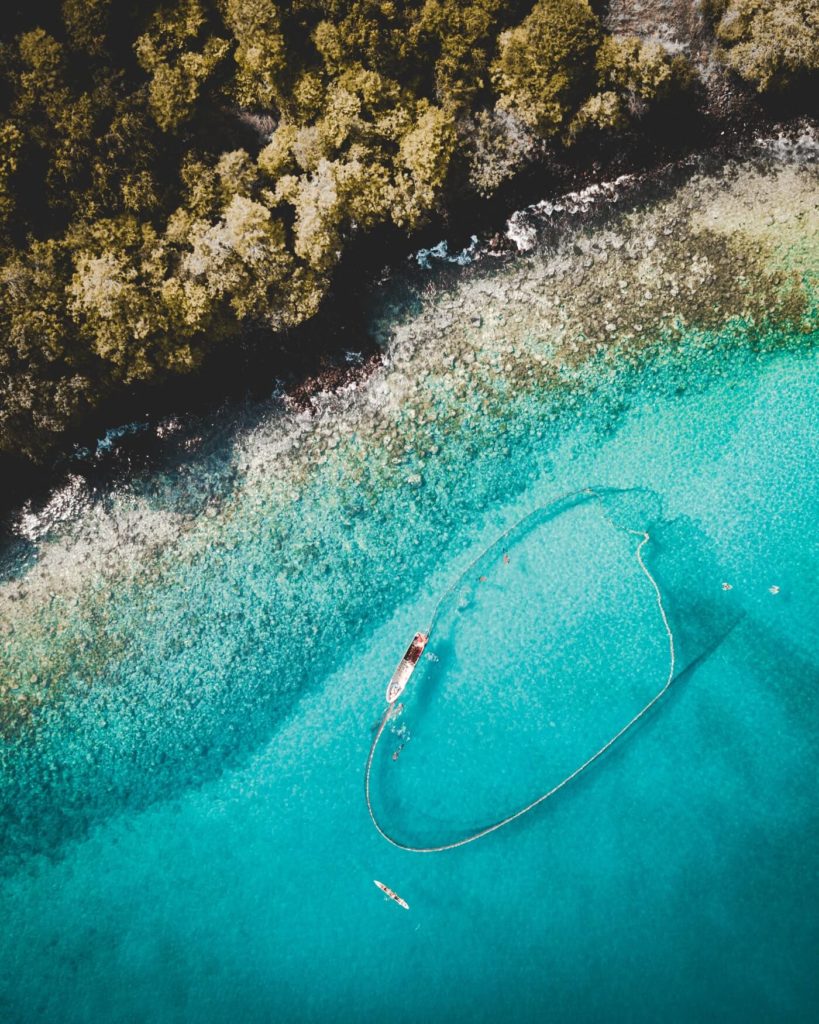 Nearly half of all the plastic pollution in the ocean is made up of discarded fishing gear.  Leftover fishing nets do not lie dormant in the ocean after they have fulfilled their purpose. They float ominously in the path of unsuspecting creatures — including whales, dolphins, turtles, and porpoises.

Sometimes animals are caught in fishing hauls accidentally, which is known as bycatch. Other times, nets left in the ocean ensnare large mammals like dolphins and whales, which is called entanglement.

Cetaceans need to come to the surface to breathe air to survive, but if they can’t free themselves from nets fast enough, they often end up drowning.

According to the World Wildlife Fund (WWF), “entanglement in fishing gear is the leading threat for whales and dolphins around the globe — estimated to cause at least 300,000 deaths per year.”

It continues, “bycatch has led to the almost certain demise of the world’s smallest porpoise, the vaquita in the Gulf of California, and several more species are likely to follow if governments and fishers aren’t able to effective means to halt this unwanted and unnecessary cause of morality for cetaceans worldwide.”

WWF notes that the problem has escalated largely due to inaction from the world’s governments. It reports that politicians are ignorant about the consequences of bycatch and entanglement. It says, “in many countries, there is a lack of political will to address the problem or it is not a political priority.”

In the UK, bycatch is the most common cause of death of cetaceans. Kate Swindells — a research assistant for the UK Cetacean Strandings Investigation Programme — told the Natural History Museum, “it’s horrible to see. You can often tell what kind of fishing gear killed the animal from its injuries. Porpoises sometimes have circular rope marks around their mouths, and in the tangled whales you see evidence of bigger ropes.”

“Entanglement is a major welfare issue causing a horrible death,” she continued. “It often results in animals starving or drowning. Big whales are strong and can sometimes break free of ropes, but they also end up towing nets behind them for months. Smaller animals just drown. It’s one of the biggest issues in the waters around Britain at the moment.”

Together with vessel collisions, entanglement helped send the population of the North Atlantic Right Whale into decline. There are now less than 100 reproductively active females in the wild, according to a study published in the ICES Journal of Marine Science. 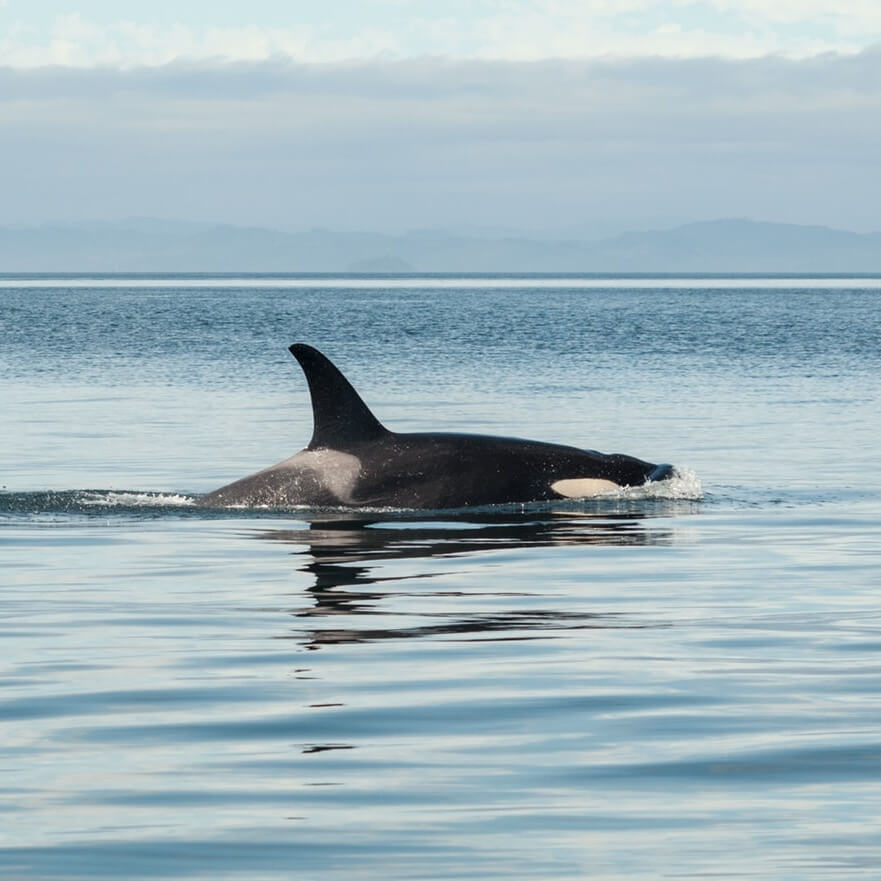 Killer whales in Canada need Chinook salmon to survive, which is disappearing.

Entanglement and bycatch are not the only aspects of the fishing industry that harm whales.

In the waters off of Canada’s Pacific coast, killer whale populations are in decline. A number of factors are to blame according to locals and conservation groups, including noise from whale-watching boats and pollution from agriculture. But, as the Guardian reported at the end of 2018, one of the biggest threats is the disappearance of their food source, the Chinook salmon.

“The remaining killer whales consume roughly half a million Chinook salmon per year,” says the news publication. “But years of overfishing, degradation of habitat and warming waters have crushed the once-healthy Chinook populations, along with other species of Pacific salmon.”

The newspaper notes that millions of salmon are disappearing, and the fish are now endangered or threatened. Some conservation groups asked for Chinook fishing to cease altogether, and multinational oversight body The Pacific Salmon Commission called for an immediate reduction at the very least.

“It is hard to ask people to look at themselves and see how they play into it,” said Deborah Giles, a whale researcher at the University of Washington, to the Guardian. “People fall in love with these whales, but aren’t necessarily yet willing to make a change in their own life to help them. We’re going to have to continue to ask ourselves what more we can do.” 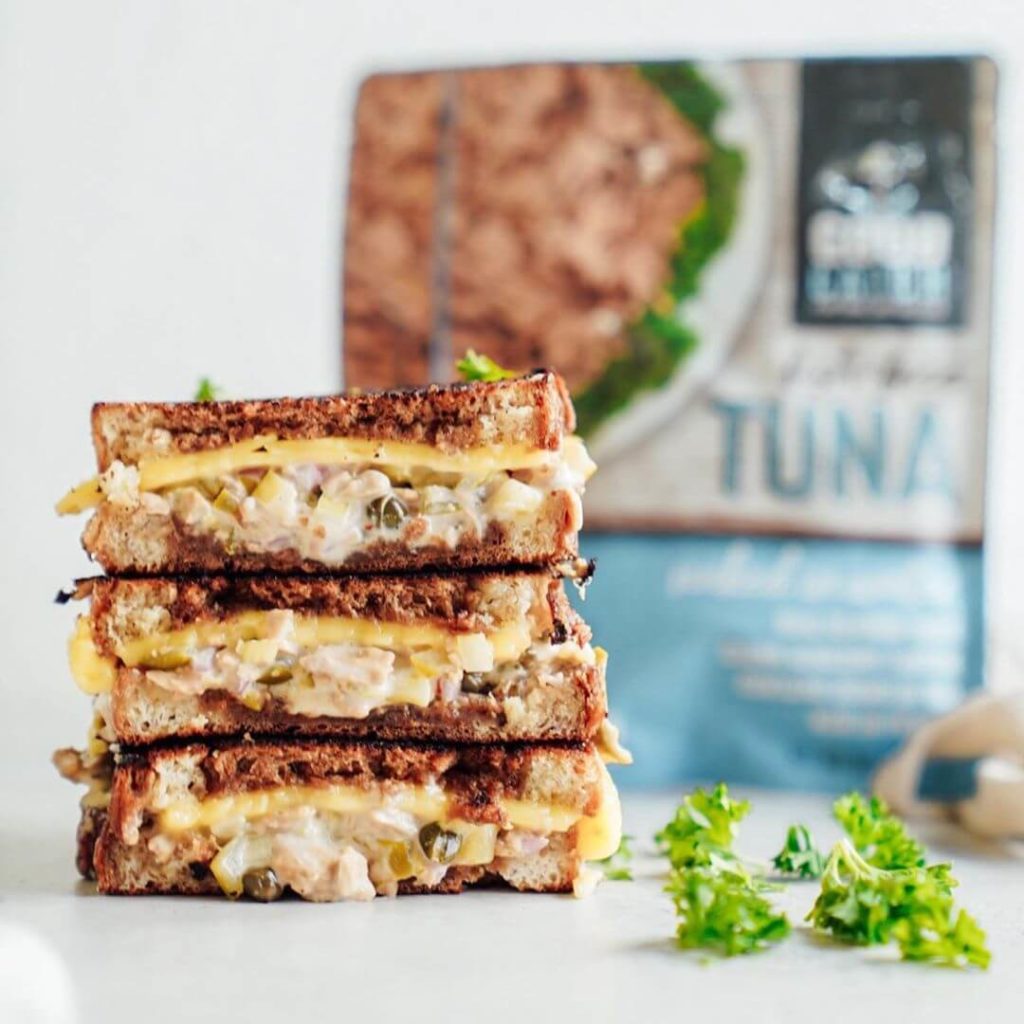 To state the obvious, whales are not vegan and do not have the option to eat anything but fish. Humans, however, have the option of eating vegan fish, thanks to a number of new brands on the market.

“At Good Catch, we’re culinary rebels with a cause,” the brand notes on its website. “We strive to help preserve the ocean’s natural resources while providing plant-based protein options that have the rich flavors and flaky textures of fine seafood. This way, you can make delicious meals that are good for you and good for the planet.”

“With the Atlantic and Indian oceans under siege, and the Pacific under review … TUNO is addressing the long-term need for alternate protein sources,” it continues. “TUNO gives people a delicious, shelf-stable and earth-conscious solution.”

Gardein, Linda McCartney, Vivera, Tofuna Fysh, and Quorn are just some of the other plant-based brands on the market that offer vegan fish products. Earlier this year, the latter launched breaded and battered fillets in a bid to supply a plant-based alternative to cod, one of the most popular and consumed fish in the UK next to tuna and salmon.

Even fish and chip shops are adopting vegan menus and some have gone 100 percent plant-based.

Last year, London fish and chip shop chain Sutton & Sons turned its Hackney location vegan, after launching a vegan menu at three of its other shops. The company makes its vegan fish using banana blossom and adds seaweed to get the authentic fishy flavor. It also offers potato-based fish cakes, vegan prawn cocktail, scampi and chips, as well as a fishless burger and Lincolnshire veggie sausages.

In Leicester, The Fish & The Chip decided to follow Sutton & Sons lead earlier this year. The owners of the shop went on an “eye-opening” fishing trip back in April. When they came back, it wasn’t business as usual. Instead, they decided to close completely. “There’s not plenty more fish in the sea,” they wrote on social media.

“After our trip away we saw the impact pollution is having on the oceans and fish stocks and we are not comfortable running a restaurant that has such an impact on our environment,” they continued. But they won’t be leaving the restaurant trade, they’re now intending to open a new vegan location instead. They added, “we are still committed to creating gluten-free, plant-based food and are really excited to share our new range very soon.”

Is It Possible to Eat Real, Sustainable Fish? 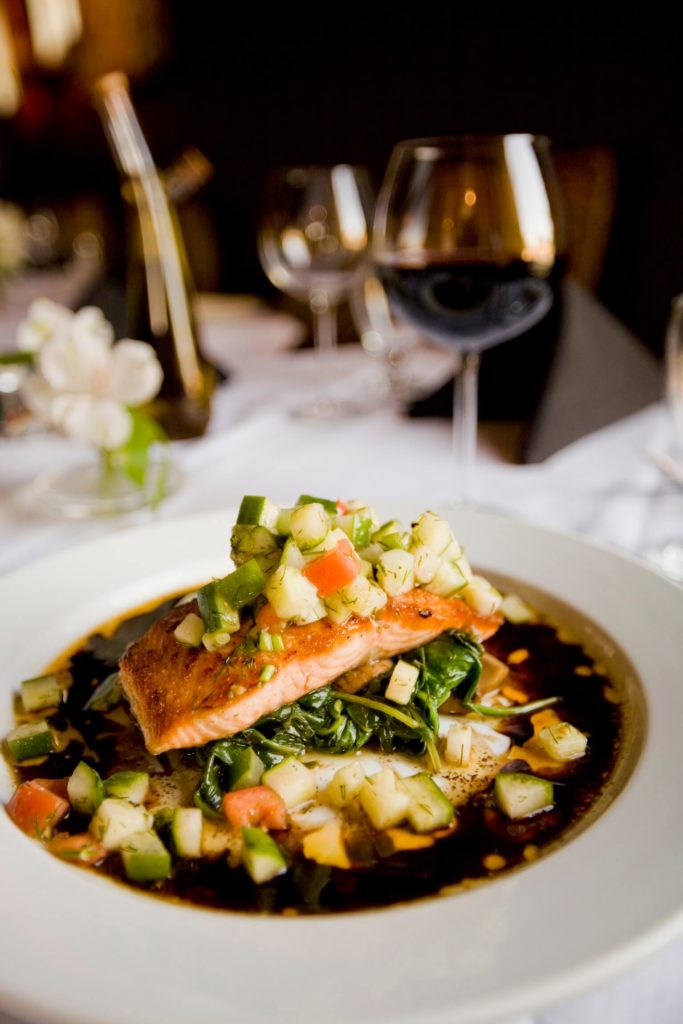 In the future, it may even be possible to eat real, sustainable fish, which doesn’t impact whale populations and underwater ecosystems.

California-based BlueNalu is creating lab-grown clean seafood. It intends to serve its first-ever cruelty-free cultured food products — yellowtail amberjack and mahi-mahi — to staff later this year. In the coming years, it hopes to offer a vast array of seafood products, including crab, Chilean sea bass, orange roughy, and lobster.

“More and more consumers are ‘going green’ and pursuing environmentally friendly and ecologically responsible decisions that help to protect the environment and sustain its natural resources for current and future generations,” the company notes on its website. “BlueNalu is introducing the concept of ‘Eating Blue,’ in which consumers can consider the oceans and make more sustainable decisions with their seafood choices.”

Like other clean meat companies, BlueNalu extracts cells from fish and then grows the meat in a bioreactor. It’s not just healthier for the ocean, and for the whales, but it’s also healthier for humans, maintains the company; mercury and microplastics are among some of the toxins contained by fish.

“We will produce real seafood products directly from fish cells, that are as delicious and nutritious as products that have been grown conventionally,” says BlueNalu. “In a way that is healthy for people, humane for animals, and sustainable for our planet.”