The question of whether feminism and veganism intersect has reemerged after powerful female social media personality and animal rights advocate Kalel “Kitten” Smith announced that she eats eggs.

Kalel Smith, popularly known as Kalel Kitten, is a YouTuber who boasts more than 1.9 million subscribers. She has supported the anti-sexual harassment feminist #MeToo movement and criticized social-media-imposed beauty standards. She also claimed to be vegan for five years and promoted vegan fashion with animal rights charity PETA.

Surprising her followers, Smith recently posted a YouTube video where she revealed she has “started to supplement my diet with pasture-raised eggs and small amounts of meat.”

PETA has since released a statement claiming that “you can’t be an egg-eating feminist.” The group launched a billboard in San Jose, California, featuring an image of a woman whose face is replaced by an egg, and the words: “Face It—You Can’t Claim to Be a Feminist and Still Eat Eggs.”

Ingrid Newkirk, PETA’s President, explained, ”Female animals are sexually exploited so that humans can drink their milk and steal their eggs, and PETA’s billboard encourages everyone to help end this oppression by going egg-free and switching to using vegan milk and cheeses.” 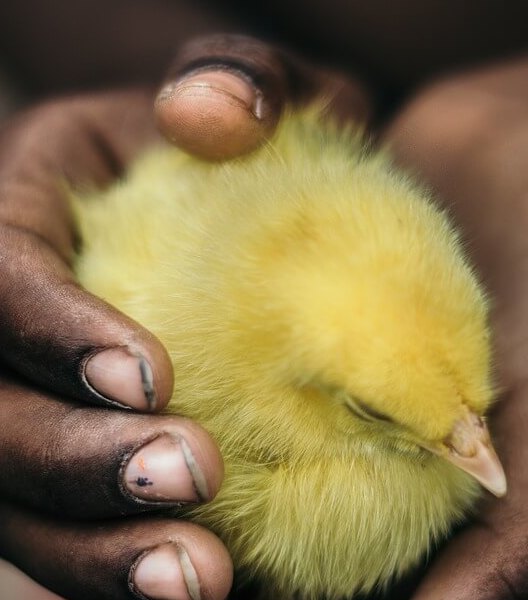 A baby chick, byproduct of the egg industry.

How are Veganism and Feminism Linked?

The animal agriculture industry depends on exploiting female animals — dairy cows are subjected to forced insemination and exploited for the milk they produce to feed their young. Chickens are valuable for their reproductive eggs, slaughtered once their laying ability flounders.

According to some feminists, this is comparable to the sexualization, objectification, and maternal-stereotyping of human women.

PETA’s billboard attempts to draw attention to this. Ingrid explained, “San Jose is a city of strong women and thoughtful students, which makes it the perfect place to spark a conversation about the blatant misogyny of the egg and dairy industries.”

The Rise of Vegan Feminists

On International Women’s Day, Israeli newspaper Haaretz spoke to a spokesperson for Anonymous for Animal Rights, Shira Hertzano, about the “powerful connection” between the women’s movement and animal rights. She explained why so many feminists are embracing veganism: “Women come from different emotional places: some out of identification as a group that has suffered from oppression, some are motivated by a motherly place of concern for the helpless.”

Vegan moms are also claiming that ditching dairy is a feminist act. One mother, Rama Ganesan, explained to Free From Harm: “[A] the baby calf is a by-product of the dairy industry. But to the mother cow, her calf is everything…They want to be together, just like we want to be with our babies.”

With so many vegan alternatives to dairy milk and poultry eggs, it is easier than ever for feminists to bring their values of equality to the dinner table.