Blueprints for IKEA’s Garden Sphere are available for free download, distribution, and reuse. The product design allows any users to feed an entire street, block, or even neighborhood, depending on population.

The entire Growroom frame can be constructed with just a few supplies: plywood, screws, a hammer, and access to a local fab lab. Experts suggest small workshops offering digital fabrication are increasingly commonplace. “This means most people — in theory — could produce almost anything themselves,” the company press release read.

Community-grown food minimizes the distance traveled and other contributing factors in food production’s carbon footprint. Many people do not have ready access to fresh produce and outdoor space. The Growroom can help facilitate shared access to both.

“Local food represents a serious alternative to the global food model. It reduces food miles and our pressure on the environment, and educates our children about where food actually comes from,”  Space 10 noted on its website. “The challenge is that traditional farming takes up a lot of space — and space is a scarce resource in our urban environments.” 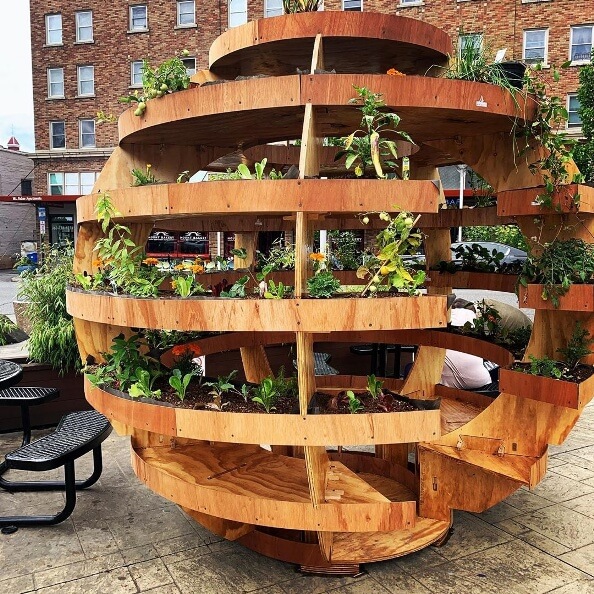 The Growroom could increase access to fresh produce in urban areas. | Image/bellinghammakers

IKEA emphasizes sustainability in several other areas of its business. In its 2018 sustainability report, IKEA estimated its climate footprint to be 26.9 million tons of carbon dioxide equivalent. Following this, the home furnishings retail giant announced plans to invest over $220 million in efforts to become “climate positive.”

IKEA has also banned all single-use plastic from its cafes to minimize waste and preserve the environment. Instead, the company now uses alternatives such as wooden cutlery and paper straws. The retailer says it sources all materials from sustainable suppliers.