Instagrammer @erik.vx.stockholm recently shared their vegan meal at the store in Kungens Kurva, a municipality of Stockholm, which consisted of IKEA’s veggie balls and three desserts: berry mousse with blueberries, banana walnut cake with blackcurrants, and raspberry soft serve sorbet. Although they enjoyed the savory portion of the meal, dessert was the highlight.

“Yes, of course we would liked a oat or coconut based soft serve but it still was much better than we thought it would be. Very nice banana cake as well,” they wrote.

The banana cake was also spotted by Zurich-based Instagrammer @vegansofzuri, who had it with vegan beet risotto, salad, and a blackcurrant oat smoothie. They added: “Now if they could just start selling their vegan hotdogs in Switzerland too…” 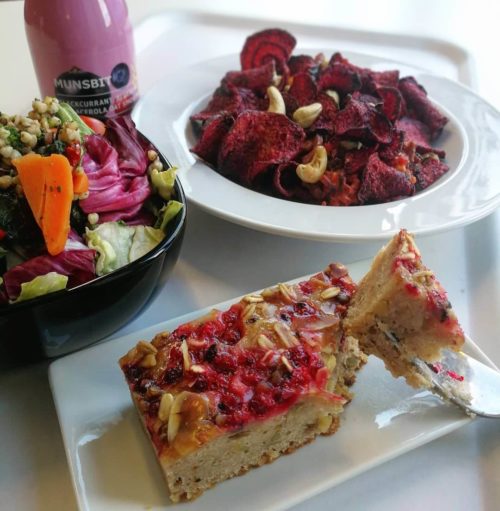 The Swedish multinational chain isn’t just known for its affordable, assemble-it-yourself furniture. IKEA’s food courts are becoming popular for their vegan options. Last April, the furniture giant launched dairy-free strawberry soft serve at Bistro locations across Europe. Although it was fruit-based, IKEA noted that it is also working on soy and oat options.

“Our ambition was to create a plant-based treat that is as soft, airy and delicious as our popular dairy-based soft ice,” said Sandra Lindh, commercial manager at IKEA food services AB. “It’s an easy, affordable and delicious treat for customers that either need or want to skip dairy products and prefer plant-based food options.”

IKEA’s vegan hot dogs were so popular that the retailer made the cafeteria option less expensive than the meat-based hot dog. The veggie dogs are now available in 10-packs. Vegan meatballs with a more realistic texture than the Swedish veggie balls that are currently available are also in the works.

Last June, IKEA entered a partnership with Claus Meyer, the influence behind the plant-forward New Nordic Cuisine and the co-founder of Denmark-based restaurant Noma, which was named the “best restaurant in the world” four times. Meyer said that a “broader overhaul” of IKEA’s menu is on the way, focused more on organic produce.