Swedish-founded international furniture giant, IKEA, is selling vegan caviar. Named “Sjörapport” or “Seaweed Pearls,” the caviar is made from kelp seaweed which is “harvested from the seabed, then ingeniously made into shimmering pearls with a fresh taste of sea and saltiness.”

According to The Takeout, an online food magazine, the vegan caviar is not quite the same taste-wise as traditional caviar, however, it’s pretty close. “When you taste IKEA’s seaweed pearls in isolation, there’s no burst of the bubble – the texture is more apparent when bitten through, a light crunch against the molars,” writes Kevin Pang for The Takeout. He adds, “there is a sweetness of the saltwater sea that stands on its own.”

In the online description of the product, IKEA notes that the seaweed pearls include no animal ingredients and adds that by consuming plant-based foods, customers can reduce their carbon footprint. This is not the first time the chain has promoted vegan food as a sustainable option; in April, it sent out a newsletter to customers asking them to celebrate Earth Day by enjoying a vegan meal. 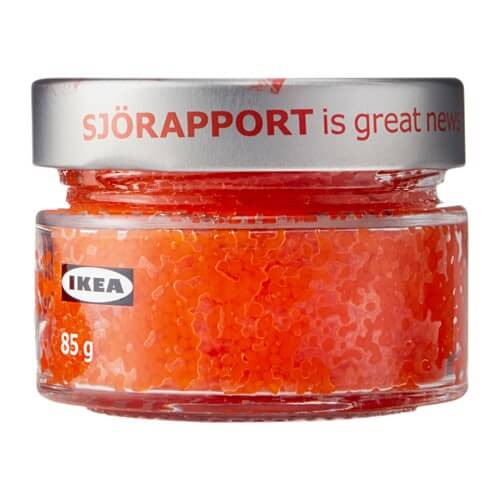 In February, IKEA announced the development of its first vegan hot dog. “Every year 660 million people enjoy the IKEA Food offer, and we see this global reach as an opportunity as well as a responsibility to serve food that is good for people and the planet,” said Managing Director at IKEA Food, Michael La Cour. He added, “with the new veggie hot dog, we can inspire and enable customers…to choose a plant-based more sustainable option at an affordable price.”

As well as vegan food, the furniture chain promotes the importance of wildlife conservation. It worked alongside WWF to produce collections of kids’ toys and duvet covers to better “engage children in sustainability topics.”