IKEA’s vegan hot dogs are now cheaper than its meat-based ones.

A post by Instagram account @thevegan.society2 drew attention to the price difference between IKEA’s vegan and animal-based hot dogs. The Veggie Dog was priced at 75c, compared to the conventional hot dog’s $1 at one of its locations.

“They didn’t even put a description for the meat hot dog,” the post was captioned, referring to the fact that the Veggie Dog’s toppings — sweet and spicy mustard, pickled red cabbage, and roasted onions — are listed whilst the meat hot dog’s description is bare. 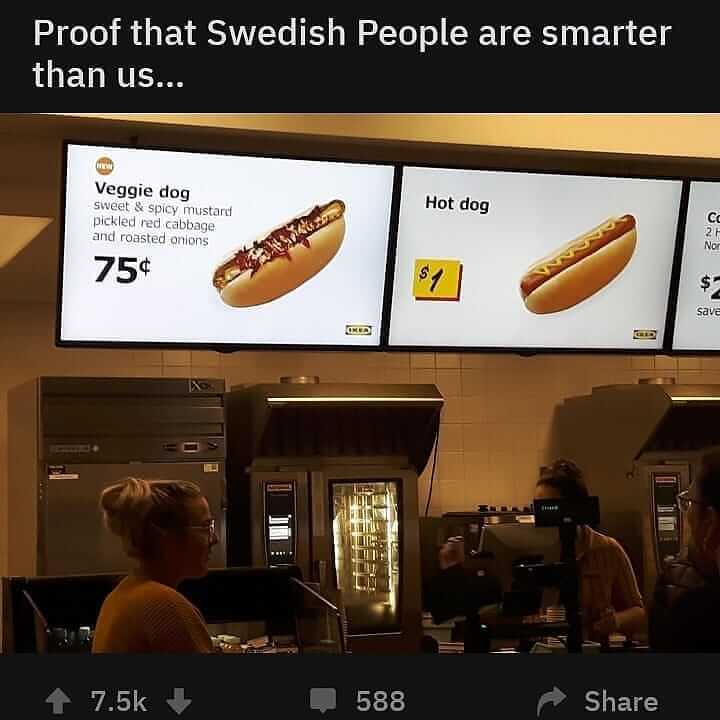 The Swedish-founded furniture giant has been upping its vegan food options recently to cater to growing demand.

IKEA introduced its vegan hot dogs last year following a test run in Malmö, Sweden, where it received a 95 percent approval rating. Shoppers purchased around one million veggie dogs in the first two months of the launch. IKEA took to Instagram in response, sending out “one million” messages of thanks to those “making planet positive choices.” The veggie dogs, which are made with kale, red lentils, carrot, and ginger, are said to carry a carbon footprint that is around seven times smaller than a conventional meat-based hot dog.

Vegan food has long had a reputation of being more expensive than non-vegan food. And while many plant-based foods — like lentils, beans, and in-season fruits and vegetables — are some of the most inexpensive foods out there, plant-based meat and dairy products are becoming cheaper, too.

Plant-based meat brand Beyond Meat, famous for its popular “bleeding” Beyond Burger, has pledged to make its vegan protein cheaper than animal products. “We have an ambition to be part of the generation that separates meat from animals,” said Beyond Meat’s founder and CEO Ethan Brown to Forbes earlier this year. “There’s no reason [plant-based protein] shouldn’t be cheaper than meat.”