The new plant-based option was part of the company’s efforts to provide more environmentally sustainable options for customers. Animal agriculture is one of the largest contributors to climate change, accounting for 14.5 percent of all global greenhouse gas emissions, according to the Food and Agriculture Organization of the U.N.

IKEA initially trialed the vegan hot dogs at its Malmö, Sweden, location, where it develops its food range. It was a hit: that test earned a 95 percent approval rating among customers.

“With the introduction of the veggie dog, IKEA Malmö is seeing a new customer in their bistro, whether they are vegans, vegetarians, flexitarians or meat-reducers,” Peter Ho, sales leader of IKEA’s U.S. food division, said at the time. 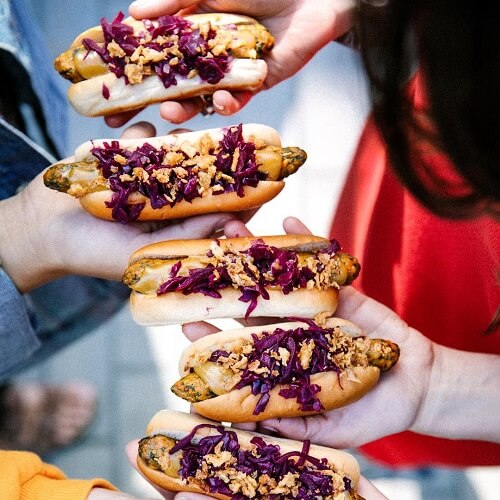 Better for the Planet

The meatless hot dog isn’t like a ballpark frank—it’s made from a vegetable-forward blend of kale, red lentils, carrot, and ginger. It comes topped with pickled red cabbage, spicy mustard, and roasted onions. IKEA worked on the recipe for over a year.

According to the Swedish furniture giant, its vegan hot dogs produce seven times fewer CO2 emissions than meat-based hot dogs. “The emissions factors are provided by external consultants and include all greenhouse gases,” explained an IKEA representative.

The meatless hot dog launched in the food courts of its European stores in summer 2018. According to Fast Company, it was a big hit on an international scale. IKEA sold one million hot dogs two months after the launch.

“We’re happy that you like the new veggie hot dog as much as we do,” the brand wrote on Instagram. “In the first two months IKEA stores in Europe sold around 1 million veggie hot dogs. From all of us at IKEA Food to all of you: 1 million times thank you for making planet positive choices!” 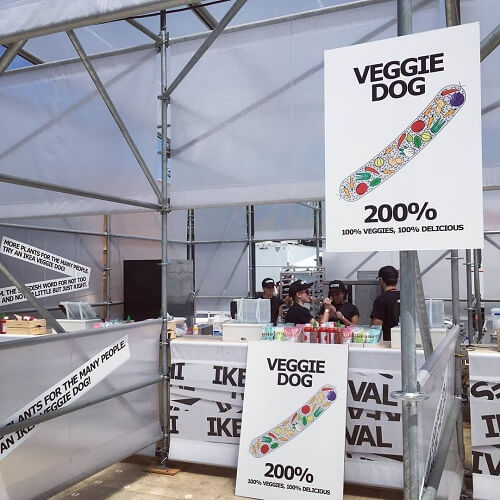 The U.S. got its first taste of vegan hot dog at the Boston Calling music festival. | IKEA

‘The Next Generation of Consumers’

American customers were also given a sneak preview of the vegan hot dog—at the Boston Calling Music Festival in May 2018. Michael La Cour, managing director at IKEA Food Services, called the festival a “great environment” that “fits the next generation of consumers.”

“[W]e have been in music festivals before and it’s a great way to meet people outside of their homes,” explained La Cour.

In September 2018, the veggie dogs launched officially in the U.S., where it retails for $0.75—less than the price of a meat-based hot dog. It’s vegan except for the bun, which contains egg. Business Insider author Jessica Taylor described her experience trying it:

“The veggie dogs were a lot more flavorful than I expected. It also had a good texture. It seemed like it would be mushy or fall apart, but that wasn’t the case,” she wrote. “The toppings added a nice crunch on top—the roasted onions were crispy, and the red cabbage added a bit of sweetness to it.”

IKEA’s strategy worked. Merlijn Crébolder, IKEA’s food manager in the U.S., said: “What we absolutely aim for is to encourage customers to choose the veggie dog over the meat dog–and we also see a reality that that really happens. We see in our sales figures that we are meeting the needs of our customers that already made the choice of vegan options, but we also see that the classical meat eater is very willing to try this option, because it’s really a tasty dog.”

In October 2018, the veggie dogs launched across Canada. And nearly one year later, it rolled out in food courts across the store’s food courts in Australia. 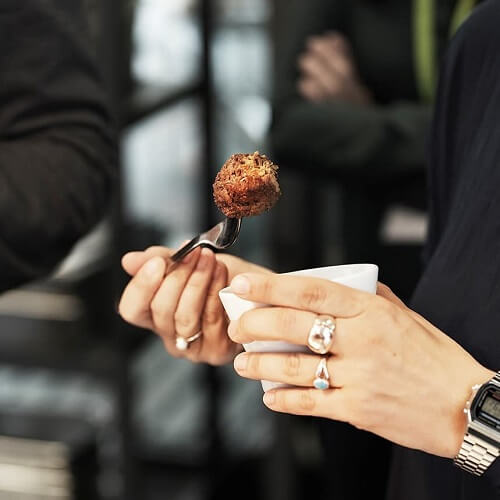 ‘The Same Level As Our Iconic Hot Dog’

Not only available in food courts, IKEA also offers frozen packs of the veggie dogs. “A package of KORVMOJ contains 10 pieces of the same plant-based sausage you already know from the IKEA Bistro offer – now you can easily create your own veggie hot dog at home,” the company wrote on Instagram.

Customer demand prompted the launch, according to a press release. “When starting the development of the veggie hot dog, we asked ourselves: Has a plant-based hot dog the potential of becoming as loved by the many as the traditional hot dog? For me the success of the veggie hot dog in the Bistro and now the launch of KORVMOJ confirms our hopes and really lifts this plant-based alternative to the same level as our iconic hot dog,” La Cour said in a statement.

The 10-pack launched in Swedish locations in February 2019, followed by the U.S. and Asia-Pacific markets. Between its introduction to Bistros and the introduction of the frozen version, IKEA noted that it sold more than five million hot dogs.

Sustainability is one of IKEA’s core values. By 2030, it aims to become “climate positive,” meaning it will reduce more emissions than it creates.

Food is a major part of that. Its first foray into planet-friendly plant-based food was a veggie version of its iconic Swedish meatballs made from chickpeas. The company recently announced that a new, meatier version made from pea protein—the key ingredient in the meaty Beyond Burger—oats, apples, and potatoes, set to launch in stores this August.

“We see a growing demand from our customers to have access to more sustainable food options and we want to meet that need,” La Cour explained. “Our ambition is to make healthier and more sustainable eating easy, desirable and affordable, without compromising on taste and texture.”

Last April, its stores in Malmö and Helsingborg began growing fresh greens in shipping containers in order to reduce its carbon footprint from transporting produce across the country. The greens were served in employee canteens, but IKEA hopes to start serving it in on-site restaurants as well.