Another account, called Now You Know Its Vegan, reposted the image. Instagram-users were excited by the news; one posted “trip to IKEA needed,” others commented, “brilliant,” and “yet another reason for an IKEA trip.”

The picture also shows a vegan courgette and lime dessert.

Some of IKEA’s other vegan options include gummy sweets, strawberry soft serve, and oat smoothies. 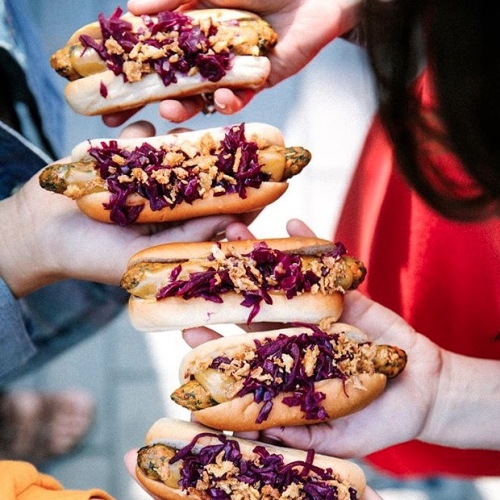 IKEA’s veggie hot dogs consist of a blend of kale, carrots, and lentils.

In 2018, IKEA launched a veggie hot dog in its European and US Bistros.

The veggie dogs are made from a blend of kale, carrots, red lentils, and ginger.
They are served on a bun (some may contain egg) with sweet and spicy mustard. Customers can also opt for crispy onions and pickled red cabbage as toppings.

IKEA developed the veggie hot dog as a sustainable alternative to its meat hot dogs.

“Every year 660 million people enjoy the IKEA Food offer and we see this global reach as an opportunity as well as a responsibility to serve food that is good for people and the planet,” Michael La Cour, Managing Director at Ikea Food Services AB, said in a press release.

“We can inspire and enable customers looking for a quick tasty bite in the IKEA Bistro to choose a plant-based more sustainable option at an affordable price,” he added.

The company sold one million veggie dogs in the first two months in Bistros across Europe.

In the first two weeks of launching in the US, one out of every ten customers that bought a hot dog chose the veggie option.

Last year, the company announced it would be launching a new “meatier” vegan meatball. IKEA first introduced vegan meatballs made from chickpeas, green peas, and carrots to its menus in 2015. The new meatballs will launch in European locations this August.

The vegan red velvet muffins are available for £1.55.