IKEA’s new vegan meatballs are on the verge of a global takeover.

The Swedish multinational furniture company’s plant-based meatballs are set to launch at IKEA stores in the U.S., Australia, Singapore, and Dubai.

Dubbed the “Plant Ball,” the plant-based version of IKEA’s iconic Swedish meatballs feature ingredients commonly used in Swedish cuisine. These include yellow pea protein, potatoes, oats, and apple. Similar to the meatballs, the plant balls will be served alongside mashed potatoes, cream sauce, and lingonberry jam—some of which contain dairy.

In a press release, IKEA revealed it will be launching the plant balls in U.S. stores later this month. Aussies will be able to get their hands on the warehouse chain’s meatless meatballs next when they launch in October. The chain will release the plant balls in Singapore in October, too, and then in Dubai the following month. 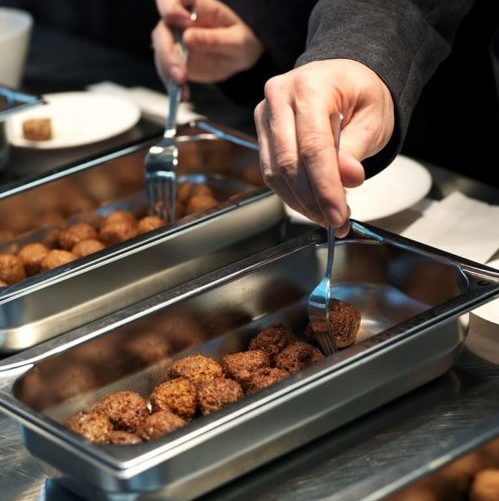 IKEA debuted the new vegan meatballs in the U.K. in August.

The furniture giant already offered a vegan-friendly, vegetable-based meatball made with chickpeas, green peas, and carrots.

However, IKEA says it developed the new plant balls, which look and taste more like its traditional meatballs, as part of its commitment to becoming more sustainable.

“At IKEA we sell more than one billion meatballs every year,” Sharla Halvorson, Health and Sustainability Manager for the global IKEA food business, said in a statement. She added: “Imagine if we could get some of our many meatball lovers to choose the plant ball instead.”

Halvorson explained that if the company converted approximately 20 percent of its meatball sales to plant balls, its climate footprint for the food business would have an eight percent reduction.

IKEA’s commitment to sustainability precedes the new vegan meatballs. In 1992, it launched an Environmental Action Plan. It aims to reduce the use of packaging and energy usage, among other things.

The company also pledged to become climate positive by 2030 and to have a 20 percent plant-based menu by 2022. IKEA already offers a number of vegan options, including dairy-free smoothies, vegan soft-serve ice cream, and meatless hotdogs.