Impossible Foods’ Impossible Burger is now available at more than a handful of restaurants across Canada.

Restaurants include Bymark, Maker, Patois, and Ufficio. The latter, an Italian restaurant in Toronto, launched a fully plant-based menu last month. The restaurant’s chef, Ivana Raca, announced the addition of the Impossible Burger on Instagram. She wrote: “I’m thrilled to announce that I’m among the first to welcome Impossible Foods to Canada!”

In a press release, Impossible Foods’ CEO and Founder Patrick O. Brown said the Impossible Burger’s launch is “a watershed moment for Impossible Foods—a proof point and accelerator for the international movement toward a sustainable, plant-based food system.”

All Canadian restaurants will be able to order the vegan meat starting next month. It will debut in grocery stores later this year. 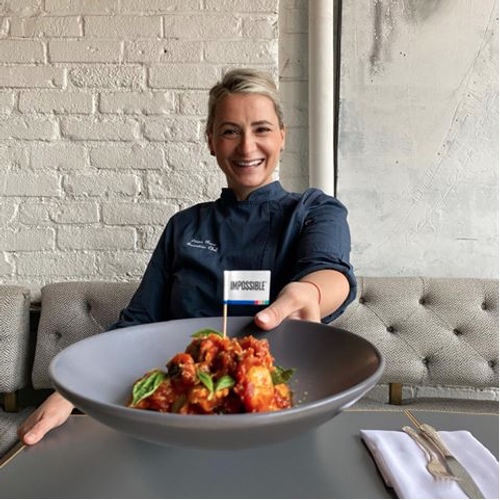 The Italian restaurant was one of the first to launch the vegan meat. | Chef Ivana Raca

This is the first time Impossible Foods has debuted its vegan meat internationally since its launch in Asia.

Hong Kong is the first Starbucks in Asia to add Impossible Foods’ breakfast sausage to the menu, according to Andrew Hui.

Hui is the general manager of Starbucks Hong Kong and Macau. “We’re joining hands with customers towards a better future, where we are more mindful of the choices we make in our daily routine,” Hui said in a press release.

Starbucks Singapore also added Impossible to its menu. The coffee chain will serve the Impossible Wrap, which features a meatless patty, an avocado omelet, and dairy cheese. Starbucks also launched the Impossible Rendang Pie in stores throughout the country in July.

In August, the food-tech startup revealed it had landed an additional $200 million in funding. This follows the $500 million Impossible Foods secured earlier this year. The company has raised nearly $1.5 billion to date.

Impossible Foods will use the newest round of funding to expand the research and development of new products.