(Updated August 29, 2020) The Impossible Whopper was perhaps the biggest meat-free fast food launch of 2019. Featuring the Impossible Burger, a vegan patty made by California-based food tech brand Impossible Foods, it has been celebrated for its resemblance to the real thing. But, Burger King isn’t the only restaurant that serves Impossible meat—the company has gained a strong presence in the food space in just over three years. Here’s what you need to know.

Today, the Impossible Burger is available in over 15,000 restaurants in the U.S., Hong Kong, Macau, and Singapore. But just three years ago, it was only available on one: Momofuku Nishi, an Asian fusion founded by celebrity chef David Chang. The burger was added to the menu of the Chelsea-based restaurant in July 2016. New Yorkers lined up out the door for the burger, which was available in limited quantities. As the year went by, the Impossible Burger launched in more restaurants across the city, eventually landing deals with fast-casual chains like Wahlburgers, Fatburger, and Bareburger. The company is still looking to scale up production capacity: In July 2019, it announced a co-manufacturing partnership with major meat producer the OSI Group. 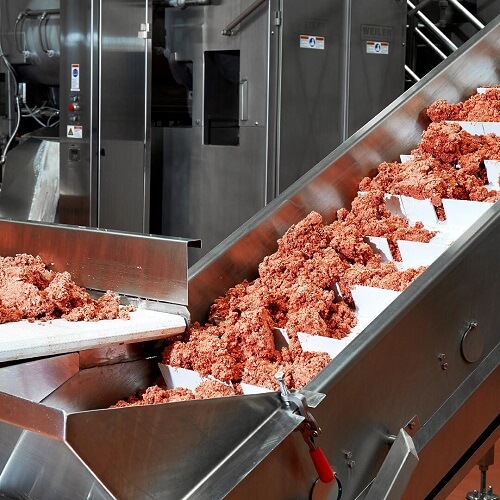 Impossible meat is made at the Oakland factory.

What Is the Impossible Burger Made From?

The Impossible Burger’s claim to fame is its realism; it looks like ground beef in its raw form, it browns up on griddles, and it has a flavor and texture that can sometimes taste indistinguishable from the real thing. In a way, Impossible Foods treats its flagship product like software. The original burger was made from wheat and potato protein but, the Impossible Burger 2.0, introduced in January 2019, is made from soy and potato protein. This version is also gluten-free.

Thanks to a flavor compound known as soy hemoglobin, heme for short, the Impossible Burger tastes similar to beef. Heme is an iron-rich compound found in all living things—flora, fauna, fungi, and even bacteria. It’s why blood has a somewhat metallic aftertaste and according to Impossible Foods, it makes meat taste like meat. Impossible Foods sources its heme from soy plants, but in the path to obtaining the FDA’s Generally Regarded as Safe (GRAS) certification, the company conducted tests on rats, which has caused controversy among some vegans. 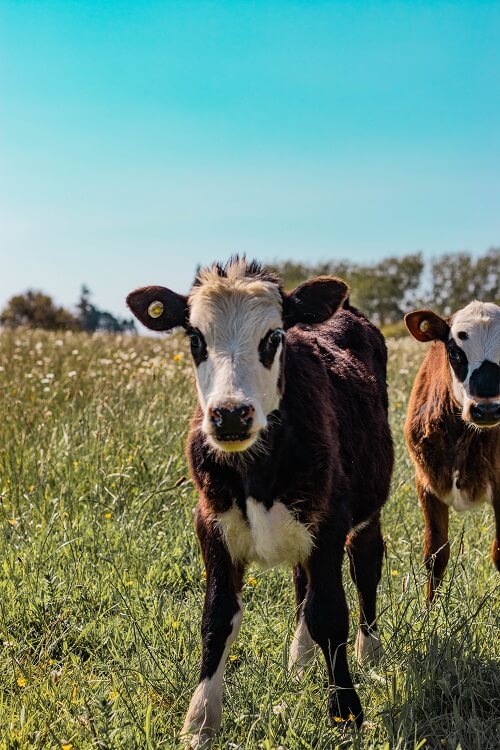 Can vegan beef save the planet?

Animal agriculture—beef, in particular—weighs heavily on the planet. The EAT-Lancet Commission on Food, Planet, Health, released a report calling for a transition toward a more sustainable food system: one that relies less heavily on animal agriculture.

Impossible Foods’ has a lofty mission: to create an animal-free food system by 2035. CEO and founder Pat Brown acknowledged that it may not sound feasible, but he told the Telegraph that he believes food tech will evolve fast: “From the time the first super-crappy low-resolution digital camera came on the market until Kodak basically shut down its film business was about 10 years. If you can make something that outperforms in delivering what consumers want, the market can work fast.” 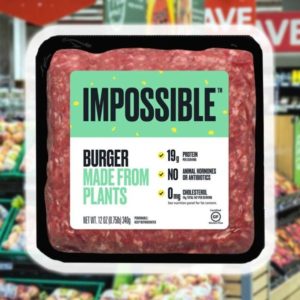 Until late 2019, the Impossible Burger was only available in restaurants. But now the brand is moving into grocery stores. Impossible meat, packaged like ground beef, first launched in Southern California before making its way to the east coast.

In July 2020, The Impossible Burger launched in nearly 2,100 Walmart stores, taking its retail presence to more than 8,000 stores at the time.

In August 2020, a partnership with America’s biggest grocery retailer The Kroger Co. was announced. The Impossible Burger is now available in nearly 2,000 Kroger-affiliated stores across the U.S, including Kroger, Fred Meyer, Mariano’s, and Ralphs. 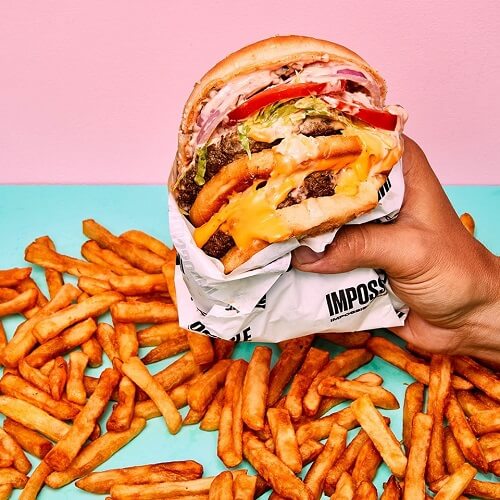 Impossible Foods has broken ground in the fast-food market. It first launched nationwide at White Castle stores in September 2018 following trials throughout New York, New Jersey, and Chicago. Mexican chain Qdoba added Impossible meat to all 730 locations last May. A month prior to the launch, Impossible Foods announced another partnership: Burger King. The Impossible Whopper trialed in 59 locations in St. Louis before being put on the fast-track to a national launch due to its success. With more than 7,000 restaurants across the country, Burger King is Impossible Foods’ biggest partnership to date. 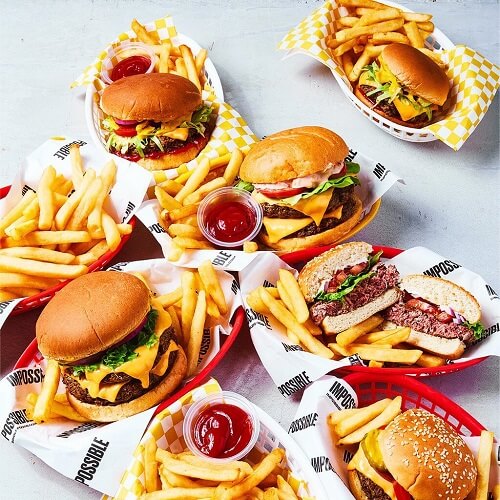 You can find the Impossible Burger at both national and local restaurants.

The Impossible Burger has been the company’s flagship produce since its launch. For the most part, restaurants serve it that way—but, the company is branching out. Little Caesar’s kicked off a test featuring Impossible Sausage-topped pizza last May. Italian chain Fazoli’s began testing plant-based meat sauce at five locations near Lexington, Kentucky, last December. It’s also available at smaller restaurants across the country. Use the store locator on the website to find options near you. 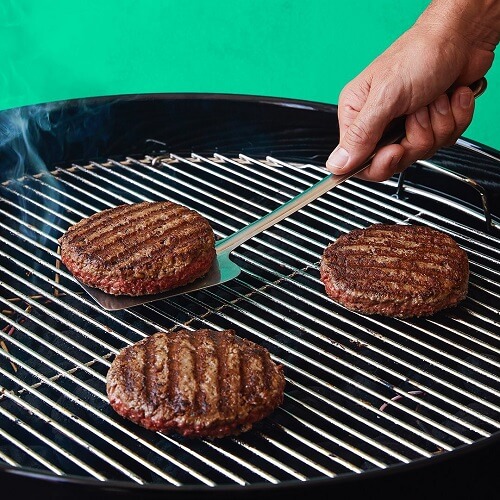 As well as restaurants, Impossible Foods has been working with foodservice providers to bring its product to schools, hospitals, and other venues. It kicked off sales to universities, companies, and other institutions in October 2017, starting with the University of Chicago and Bon Appétit headquarters in Palo Alto, Calif. Live Nation, the world’s largest concert company, added the Impossible Burger to select venues.

In 2019, Impossible Foods announced a partnership with major foodservice provider Sodexo, which serves colleges, schools, and corporate cafeterias including those of Ford and Unilever. 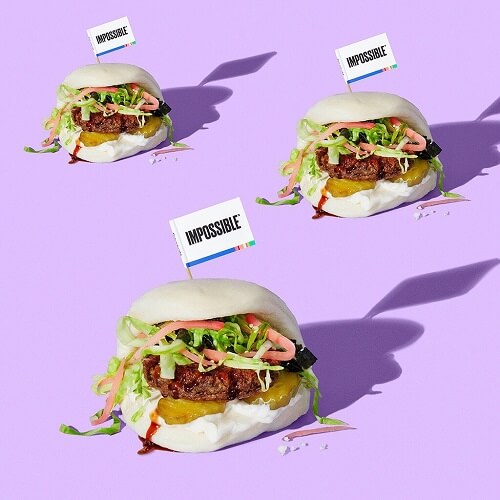 Impossible Foods is taking on the international market next.

Impossible Foods is also working toward a European launch. The brand filed an application to approve heme with the Dutch government under the EU’s regulation on genetically modified food and feed. It was passed onto the European Food Safety Authority, Bloomberg reports.

Branching out beyond burgers is also in the cards. Impossible Foods has announced plans to develop realistic fish, pork, sausage, and chicken.