The vegan Impossible Burger is launching in Walmart, the largest retailer in the world.

Starting from today, the plant-based patty will be available in nearly 2,100 locations.

“There’s no more important institution in retail food than Walmart,” Pat Brown, CEO and founder of Impossible Foods, said in a press conference. “Walmart stores are the biggest sellers of meat to American consumers. They are ubiquitous. Nine out of 10 Americans live within 10 miles of a Walmart.”

The Impossible Burger, which is made from soy and potato protein, will retail for $7.49 per 12-ounce package.

The launch is an important part of achieving one of Impossible Foods’ main goals: making its product both accessible and affordable.

As the company continues to scale up, the long-term aim is to sell the Impossible Burger at or below the price of commodity ground beef. 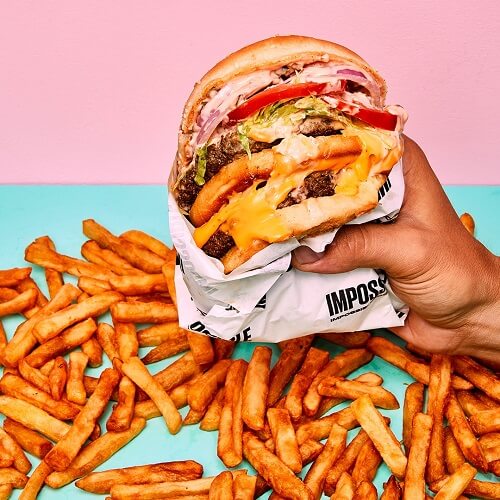 Less than six months ago, the California-based vegan meat brand was available in only 150 supermarkets in Southern California and on the East Coast.

Earlier this week, it launched in all 503 Trader Joe’s locations, retailing for $7.99 per 12-ounce package. It’s also available more than 1,700 Kroger stores. Kroger is the biggest supermarket chain in the U.S.

With the Walmart launch, Impossible Foods is now available in more than 8,000 stores. This expands its retail footprint more than 50-fold since March 2020.

Impossible Foods has scaled by adding extra shifts to its facility, two additional production lines, and building out its supply chain. The company plans to make new launch announcements monthly as it continues to scale up.

The restaurant industry has taken a hit amid the ongoing coronavirus pandemic, so Impossible Foods has focused its attention on retail launches, specifically targeting meat-eating consumers.

The Impossible Sausage—which launched in Starbucks and Burger King this year—may be the next retail launch. However, the company did not confirm a date. “It’s coming,” said Brown. “Just stay tuned.”

Impossible Pork, which the company unveiled alongside the Impossible Sausage at CES 2020 in Las Vegas, is also on the way. “If there’s any type of meat from animals consumers want, there’s meat from plants that will replace it,” Brown said.