Impossible Foods has debuted in Chicago with a ‘clandestine‘ ‘Meateasy’ pop-up to celebrate the launch of the infamous and award-winning Impossible Burger.

‘Meateasy’ is the partnership between Impossible Foods and Widen + Kennedy, a creative agency which works with some of the world’s most innovative and successful brands. Together, they devised this concept. 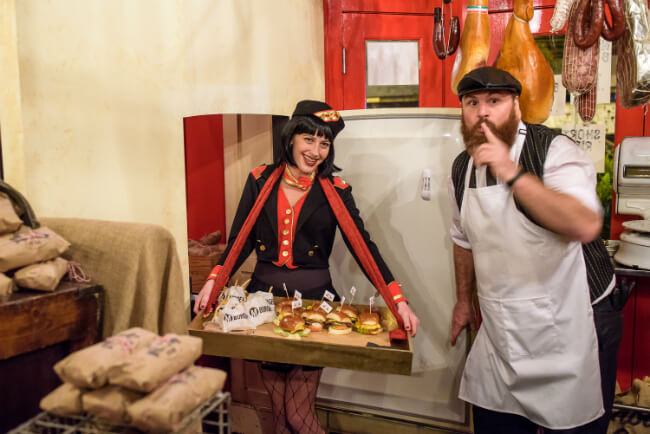 Inspired by the the Chicago Sausage Guild’s desire to ‘keep Chicago a sausage town‘ and thus pushing the vegan Impossible Burger underground, Meateasy has created a ‘safe-space‘  for Chicagoans to enjoy their meat-free burgers.

Chicagoans, known to be big meat-eaters, but increasingly opting to try out a plant-based diet, were treated to the delicious meat-free burgers (designed to smell, cook and taste like ground beef from cows) and beer in a 1920s-inspired speakeasy, hidden behind a fake butcher shop facade.

This new venture all seems very cool and edgy, with old-school delivery boys handing out newspapers on select street corners with information on the location of and secret passcode for the Meateasy; a variety of dramatic web films debuting across social media; and even hamburger-hiding hats disguised as stylish headwear, allowing patrons to sneak their Impossible Burger around the city.

According to Impossible Food’s Director of Marketing, Jordan Schenck, “[t]he Impossible Burger inspires a great deal of conversation — and we want to continue the conversation in a special venue and an entertaining concept core to Chicago’s colorful history of speakeasies, trade guilds and meatpacking.”