Impossible Foods, creators of the vegan Impossible Burger, just announced a $114 million convertible note investment in preparation for a global expansion. The plant-based burger is currently only available in select US restaurants and sporting venues.

As of late March, the Impossible Burger had reached 1,000 restaurants, though it has already exceeded this milestone as more US eateries realize its mass consumer appeal. The burger can be found in fast-casual venues such as Umami Burger, as well as ballpark stadiums, pubs, and high-end restaurants like David Chang’s Momofuku. The Impossible Burger will make its international debut later in April, in a yet to be disclosed location in Asia.

This $114 million convertible note brings Impossible Foods’ total investments to $400 million. Excluding this recent funding, in just the past eighteen months, the company has raised $214 million to supplement its increasing production and expansion. Two of the most recent investors include Temasek and Sailing Capital, two major corporate investment and private equity firms based in Singapore and Hong Kong, respectively. Early investors include Bill Gates, Google Ventures, and UBS. 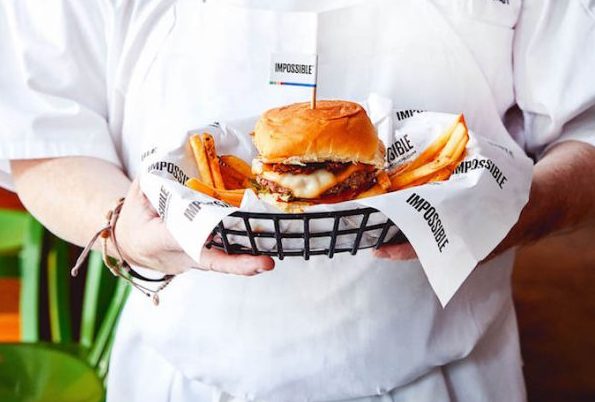 Founder and CEO, Patrick Brown, commented in a press release, “Our world-class investors enable us to ramp up rapidly and accomplish our urgent mission. We are proud of the progress we’ve made — but frankly, there are still millions of restaurants and billions of people who want meat. We won’t stop until the global food system is truly sustainable.”

According to Brown, the demand for the Impossible Burger is still outpacing production. Brown plans to add an additional shift at the company’s Oakland, Calif. facility to increase supply. In regards to its Asia debut, Brown assured that the move is strategic. Asia is responsible for 44% of the global demand for meat, and this demand is growing faster than any other region. Brown hopes to satisfy this meaty craving with the plant-based Impossible Burger to dramatically reduce the environmental and ethical consequences of eating animals.

The Impossible Burger is unlike many veggie burgers out there. Its unique plant-based formula replicates the look, taste, texture, and even smell of animal meat – so much so, often the most dedicated carnivores struggle to tell the difference.