The California-based brand known for the “bleeding” Impossible Burger unveiled its newest meat-free meat to Engadget at its headquarters in Redwood City. Like the Impossible meat launched three years ago, the new product is versatile; the company cooked it as a vegan sausage patty for breakfast sandwiches and as meatless ground beef for steamed siu mai, a type of Chinese dumpling.

“One of the important things was that although the sausage was new, really it was depending on the platform that we already had,” David Lipman, Impossible Foods’ chief science officer, told the publication. “The ingredients are very, very similar, but the ratios are different and they’re different in ways that make pretty profound differences.” 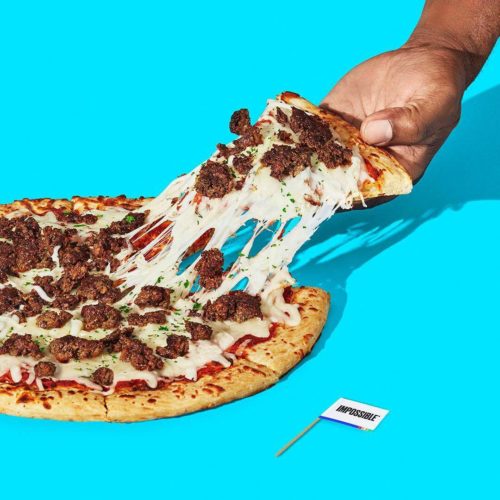 Originally made from wheat and potato protein, Impossible’s vegan burger meat now has an updated recipe consisting of soy. Its realistic meaty flavor comes from heme, an iron-rich compound that comes from soy. Along with its competitor, Beyond Meat’s Beyond Burger, it’s Impossible Foods has gained mainstream media attention.

The Impossible sausage has less heme and no potato protein, which the brand says gives its vegan burger meat its “bouncy” texture. Pizza chain Little Caesars is the first to offer it — select restaurants in the US are testing it as a cheese pizza topping.

According to CEO Pat Brown, Impossible Foods’ goal is to continue to expand its plant-based beef products, including realistic steak. But other options are in the works: the company revealed vegan chicken and pork are currently in the works last March. Eggs are also on the way, according to Engadget.

“Right now the biggest challenge for us, I would say, is scaling production,” Brown told Engadget. “When we’re thinking of new product, a very big consideration is how does it fit into our workflow? We see a ready path to making this happen.”

Impossible Foods vegan burger is currently served at a number of well-known restaurant chains across the country, such as White Castle and soon, Burger King locations in the US, Canada, and possibly the UK. The company revealed that it was facing shortages earlier this month.

Following a $300 million funding round backed by celebrities including Jay-Z, Trevor Noah, and Serena Williams, the brand announced that it would add a third shift to its Oakland production facility to help meed demand. The brand plans to go public in the future.