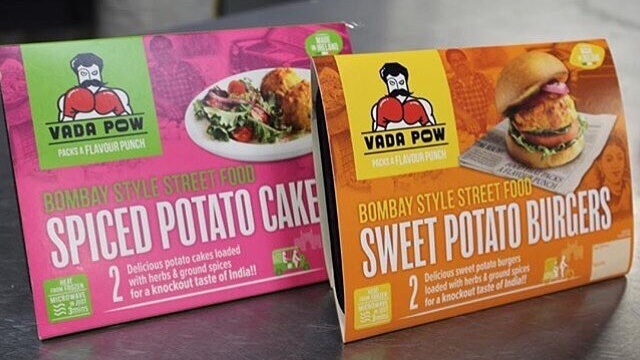 Indian entrepreneurs are finding opportunity in Europe and the UK, where authentic flavours and unique options are in high demand. The Times of India reports that Vada Pow, a Mumbai-born, Dublin-based vegan Indian street food brand, is beginning to expand beyond Ireland thanks to backing from the nation’s government.

“The vegan craze is very strong in Europe and our products, which are 100% vegan, resonate with the movement,” explained Naveen Bachani, owner and founder of Vada Pow. The name of his business is a play on “vada pav,” a popular Mumbai street food consisting of a spicy deep-fried potato patty served on a pav, or burger bun, with chutneys. The sandwich is traditionally made with ghee, making it vegetarian.

Bachani’s ready-to-eat products, which include vegan sweet potato burgers and spiced potato cakes, recently launched in German supermarket chain, Lidl. His products, along with vegan Indian ready meals like samosas are also sold in 195 stores across Ireland, including SuperValu. Soon, the Dublin-based Vada Pow will launch in the UK and Sweden with support from the government-run venture capital fund, Enterprise Ireland.

Vegan food represents only a small portion of Indian cuisine that’s becoming increasingly popular in the EU and UK, however vegetarian-friendly businesses are also on the rise. Burger Singh, an Indian burger chain that started in the UK, has one veg burger. SK Restaurants, which operates several chains under different names, also offers vegetarian-friendly menus.
According to the food-focused publication The Grocer, international street food is one of the top trends shaping the options offered in restaurants in supermarkets and Indian cuisine was named in last year’s Waitrose Food and Drink Report. While neither mention veganism, Indian flavour trends are shaping what’s offered in restaurants and supermarkets, albeit from non-Indian brands.
Tesco’s highly popular Wicked Kitchen range of plant-based food offers Indian-inspired dishes like Gunpowder Potato Chana Masala, Cauli, Bhaji, and Coconut Rice, and a Sweet Potato Pakora Wrap. Waitrose offers several own-brand pilau options, plus Tarka Dal, Bombay Potatoes, and vegan chickpea curry from The Happy Pear.