Nearly half of the residents in the Scottish Highlands town of Inverness are making efforts to reduce their red meat consumption, a new survey reveals. The survey was conducted by Quality Meat Scotland.

According to the results, an increasing number of Inverness residents are concerned about animal welfare; 32 percent said the treatment of animals was a reason for reducing meat, and 13 percent cited the environmental impact of livestock farming as their reason for reducing red meat consumption.

The concern isn’t driving shoppers toward other animal proteins though like eggs or fish. Instead, they said they try to seek out vegan protein options; 65 percent of those polled said they’re incorporating vegan meat into their diets when replacing red meat.

Inverness residents say they don’t want the meat industry to disappear entirely. According to the poll, 91 percent of those surveyed said they still eat red meat and value the region’s meat industry, which is renowned for its commitment to sustainable farming and animal welfare practices.

But meat and dairy farmers across the globe are moving away from the practice. In the UK earlier this year, the short documentary “73 Cows” — about a British farmer who gave away his cows to a sanctuary after developing emotional bonds with the animals — won a British Academy Film and Television Award. 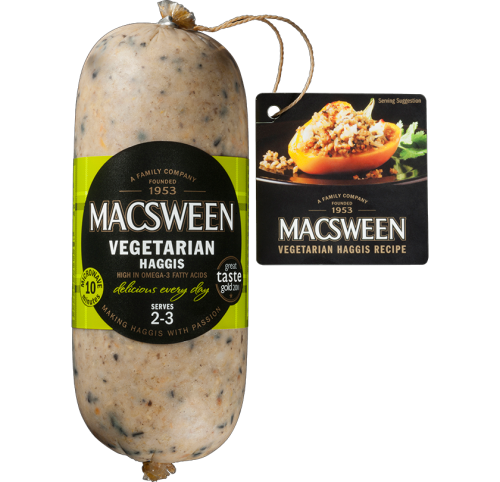 Vegan haggis, if you dare.

And despite Inverness’s ties to its livestock heritage, the shift mirrors the global move toward a more flexitarian diet and increased consumption of vegan food.

In Scotland, specifically, Edinburgh has become a hotbed for vegan options. It was recently named one of the top three cities in the world for vegan food, boasting more than 160 vegan restaurants. Glasgow ranked tenth overall. Chefs have veganized the region’s most popular foods, too, like these Scottish potato scones. There are even vegan haggis options.

“Encouraging healthy eating is extremely important so it’s fantastic that our primary pupils are being introduced to the benefits of eating less meat at a young age,” Children, Education and Families Convener, Councillor Ian Perry, said in an interview. “By participating in Meat Free Monday schools are also raising awareness of the environmental impact of livestock production, as well as the poor standards in which some animals are farmed.”