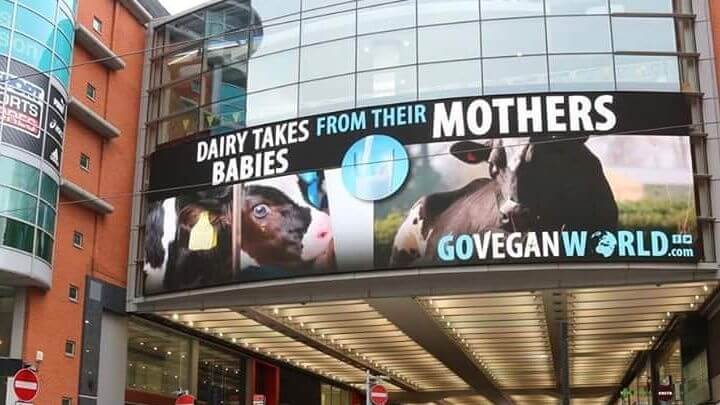 The new ads – designed to encourage passersby to make the connection between meat, dairy, and sentient animals – will be in place until after the New Year.

Launched by Go Vegan World, the ads are a first for the campaign which has not targeted Irish consumers with large video advertisements before. In a Tweet, the organisation shared a video of one of the ads in a Dublin station; it revealed a close up of two turkeys with the caption: “Defenceless & innocent. Yet we kill them.”

The use of turkeys in the ad is apt for this time of year as many Irish and UK consumers tuck into a turkey roast over the Christmas period. According to the Huffington Post, if everyone in the UK who eats turkey for dinner on Christmas instead opted for a plant-based roast, around two million animals would be saved from slaughter.

The first large screen vegan video ads in Ireland launched by Go Vegan World in time to target the traffic through the main bus and train stations in Dublin over Christmas and the New Year. #govegan #goveganworld #someonenotsomething pic.twitter.com/D40JvietRk

This might be the first time Go Vegan World has targeted Ireland with its large vegan ads but the campaign has appeared in a number of other major cities around the world. Earlier this year, in Toronto, ads were placed around the city with the message, “Humane milk is a myth, don’t buy it.”

According to Sandra Higgins, the founder of Go Vegan World and Eden Farmed Animal Sanctuary, advertisements of this nature work.

“If you asked most people if they think it is wrong to unnecessarily harm other sentient beings, they would answer that it is,” Higgins explained on the campaign’s website. “This is because we all know that other animals feel. They have the capacity to experience pleasure and are harmed when we deprive them of the opportunity to do so.”

She continued, “The aim of Go Vegan World is to expose this inconsistency between our values and our behaviour. We claim to respect fact, yet we live according to myth.”