(Updated June 27, 2019). Ireland is moving forward with a ban on fur farming. It will become the 15th European country to enact such a ban.

The move was approved by the Cabinet earlier this week. The bill “will make it illegal for any new fur farms to be established,” Minister for Agriculture Michael Creed said in a statement.

The legislation will allow the nation’s existing fur operators to exit the industry on a phased basis. The country is currently home to three mink fur farms located in Donegal, Laois, and Kerry; collectively they produce around 110,000 pelts a year.

The party’s spokesperson for Agriculture, Food, and Marine Charlie McConalogue said that the Fianna Fáil Frontbench and Parliamentary Party back the proposal to close Ireland’s three remaining mink farms.

“There has been much public concern expressed around the welfare of animals farmed for fur in recent years. Over a dozen EU member States have prohibited the activity,” he said in a statement. “In Ireland, the Irish Society for Prevention of Cruelty to Animals (ISPCA) and recently, Veterinary Ireland, have also called for such a ban on animal welfare grounds.”

The bill — called the Prohibition of Fur Farming Bill — was introduced by Solidarity–People Before Profit TD Ruth Coppinger. All political parties except for Fine Gael support the measure, The Times reports. In an interview with RTE Radio, Coppinger revealed that 80 percent of Irish people support the ban.

Can Fur Farming Ever Be Ethical?

Minks are solitary, territorial animals that live for up to three to four years and spend up to 60 percent of their time in water. Minks farmed for their fur are crammed into cages. This leads to a variety of health issues, such as injuries from fights and cannibalism as well as stereotypic behavior — a mental condition common in captive or farmed animals characterized by repetitive behavior. 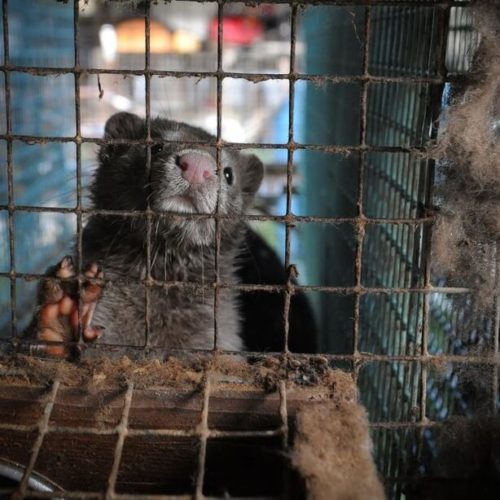 Wild minks spend 60 percent of their time in water, but are crammed into small cages on fur farms | image/Jo-Anne McArthur/We Animals

Coppinger said that it is “impossible to regulate the fur trade and somehow make it kinder. The mink are gassed at six months and their skins are pulled off.”

She urged the Irish government to follow in the footsteps of major fashion house Prada, which banned fur last May. Other major international brands to go fur-free include Gucci, Versace, Burberry, Diane von Furstenberg, and Donna Karan.

Fourteen out of 28 EU countries currently have bans in place or are in the process of implementing bans. Germany’s last fur farm shut down in April, Norway’s remaining fur farms are to be shut down by February 1, 2025, and the Czech Republic’s ban went into effect earlier this year.

Fianna Fáil maintains that the government must agree on a compensation package for those who will be affected by the closure of the last three fur farms. The industry currently employs around 100 people and similar actions were taken in the UK, which banned fur farming in November 2000.

McConalogue added, “I am glad that my party is taking a pragmatic leadership role on this issue and look forward to seeing this policy carried through in the time ahead.”