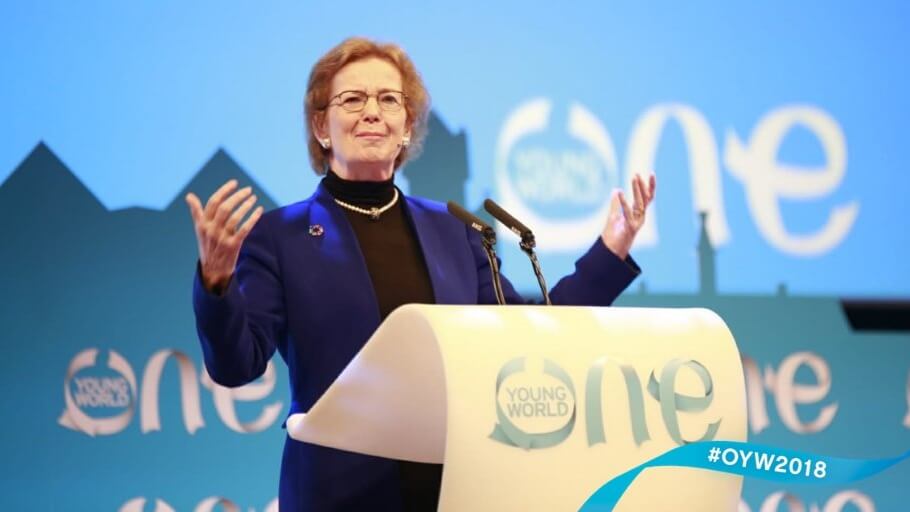 Former president of Ireland, human rights activist, and environmentalist Mary Robinson refuses to backpedal on her opinion that those who are able to, must become vegetarian or vegan or at the very least, eat less meat.

The Independent reports that in Hague on Saturday, the former UN High Commissioner for Human Rights defended her position before an audience at the One Young World summit, a global forum for leaders ages 18-30. There, Robinson told young world leaders that “achieving climate justice is the space race of your generation.”

“I said (in 2016) we all have to do more. We have to be more energy-efficient, we have to recycle, we must think about what we eat, we need to eat less meat, maybe become vegetarian or even vegan. And I got a big cheer,” Robinson said, referring to a statement made at the 2016 One World Summit in Ottawa, where she stressed the responsibility of individuals in privileged nations to adopt more climate-friendly behaviors.

While her statement was well-received at the summit, it drew the ire of local politicians. Despite the backlash, Robinson has not backed down. “But, back in my country, Ireland, this didn’t go down too well and it ended up with the local authority in my county in Ireland, Co Mayo, sending me a formal letter asking me to withdraw those words, which I have not done. And I still say, and I still say,” she continued.

Robinson doesn’t believe the responsibility belongs to the individual alone. She pushed further, stressing the need for governments to enact policies that benefit the planet. “And the point is we do have to take a stand and we do have to make our voices heard and if people take action themselves they are much more likely to use their vote and their power to change what government policies are doing. Individual action alone won’t get us there even if we try our hardest; we need government policies,” she said.

Earlier this month, Robinson had similar thoughts to share when the UN released its Intergovernmental Panel on Climate Change report. The report stated that world governments must make “unprecedented changes” to all aspects of society to mitigate the environmental consequences of global warming. Robinson added that we all need to change our behavior, saying that individuals should become “aspiring vegetarians.”

Robinson has long been a defender of the environment and human rights. She founded the nonprofit organisation Mary Robinson Foundation – Climate Change in 2010, in order to secure justice for and empower the “people vulnerable to the impacts of climate change who are usually forgotten – the poor, the disempowered and the marginalised across the world.”