This orange and persimmon quinoa porridge is full of plant protein and iron. It provides over 24 g of protein and 9 mg of iron which makes it a great way to start a chilly winter morning. Plus, it’s also a good alternative when you just don’t want to have yet another oatmeal bowl.

Porridge Made With Quinoa

I know what you’re thinking. Quinoa is a savory ingredient and it’s great in buddha bowls, as a rice alternative served with curries and stews or in a salad – but as a porridge? For breakfast?? Yeah… I was thinking the same.

Initially, I was very skeptical because I love my good old oat porridge – so why now change it? Well, I was actually researching some good plant-based sources of iron for my blog post Iron on a Vegan Diet – How to Get Enough and quinoa is one of them. I wanted to create a meal that is high in iron to go along with that blog post and came up with a quinoa and black bean Buddha bowl which you can find in last week’s post.

But then I thought – no… this is too easy. Most of those plant-based iron sources are rather savory ingredients. So, of course, I can create a lunch dish. But what about a sweet breakfast recipe? That will be a little bit more challenging. So that’s how I decided to try and make a porridge with quinoa. And it actually turned out really good and I’m definitely making it more often now.

At first, I was afraid that the quinoa would not become soft enough. Because in salads it usually adds a nice crunch but we don’t really want that in our porridge… or do we? To my surprise, the quinoa made for a perfect porridge!

If you cook it long enough and with some plant-based milk, it becomes very creamy and tender but not too mushy. I found that the trick is to not let the liquid evaporate completely. Rather, leave a little bit of plant-based milk in the saucepan. Or better, add some more to your bowl on top of your quinoa.

This orange quinoa porridge might be a great alternative for people who do not fancy oatmeal too much. Oat porridge can have quite a mushy consistency that I know not everyone likes. This quinoa porridge is still creamy yet the quinoa doesn’t fall apart like oats usually do.

Other Flavors for Quinoa Porridge

The fresh orange juice gives this quinoa porridge a nice, subtle sweetness which I really enjoyed. But I think there are so many more variations to try! Here are a few ideas: 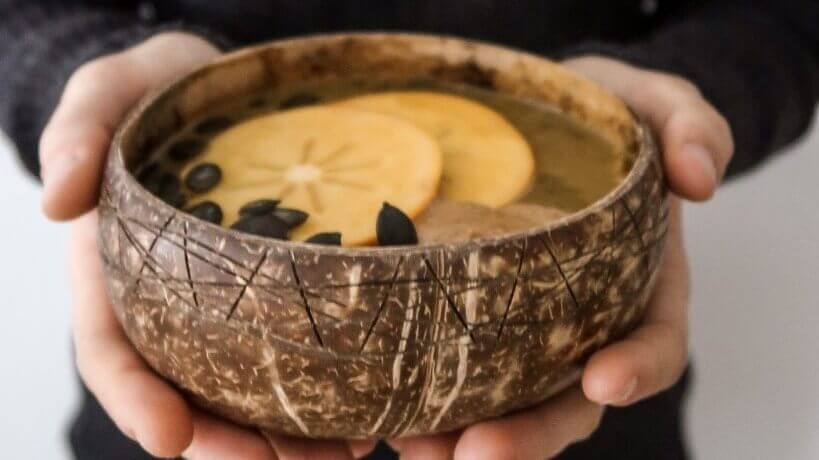 Instead of persimmon, feel free to use any other fruit you have at hand. I would imagine kiwi, bananas, apples, pears or strawberries would go well with this.

This recipe was republished with permission from Sarah’s Vegan Guide.