From a baguette fresh from the bakery to white bread and dense health food store loaves, bread is a staple in most households. But is bread vegan? And which ingredients should you watch out for?

Is All Bread Vegan?

In a perfect world, all bread would be vegan. The good news is: most of it is! Sometimes the presence of animal products is obvious in the name, like milk bread. But for others, it might not be so apparent. Pain de mie, a type of soft white bread, contains milk. Challah is made with eggs. The odd loaf in the grocery store might be made with honey. But, the majority of bread — sandwich bread, baguettes, focaccia, bagels (the exception being shops, where an egg white glaze may be used), pita, rolls, English muffins, and sourdough. This also goes for the artisan loaves you might find at your local farmers market — just be sure to ask the vendor about how it’s made.

How Is Bread Traditionally Made?

Old world-style European bread requires only four ingredients: water, flour, yeast, and salt. Yeast, a single-cell organism that helps bread rise, is classified as a fungus and suitable for vegans. Bread is usually made with a wheat flour cultured with yeast, which adds air pockets as it ferments carbohydrates and sugar. Once risen, bread is shaped and baked, but that’s not always the case. Sometimes it’s steamed or fried — and not all bread is leavened. Traditional bread might also include ingredients such as molasses or sugar.

The commercial bread of today is different from traditional four-ingredient loaves, according to the Independent. A product of mass-production, modern bread is enriched with nutrients and other ingredients to help it stay fluffy, white, and soft for months — think Wonder Bread.

Commercial bread may list ingredients such as mono- and diglycerides, which are included to help water and oil blend together. They can be sourced from an animal, vegetable, or they can be synthetically made. Enzymes, an ingredient that makes dough stretchier, can be extracted from plant, animal, fungal, or bacterial sources. Other additives may include fats, L-ascorbic acid as a flour treatment agent, L-cysteine hydrochloride to make stretchier dough, emulsifiers, and preservatives.

Because the origin of mono- and diglycerides and other ingredients can be tricky to source, many vegans don’t worry about them. According to the Vegan Society, it’s about excluding animal products “as far as is possible and practicable.”

What Is Sprouted Bread?

Sprouted bread is a type of bread made with whole grains that have germinated — aka sprouted — before being milled into flour.

Because “sprouted grain” isn’t regulated, the amount of sprouted grain flour actually used in a commercially produced loaf can vary. Some brands might mix sprouted flour with white or whole wheat flour in order to give it a fluffier texture. Bread made entirely from sprouted grains — like Ezekiel — tends to have a dense, earthy health food flavor. You can typically find it in the refrigerated section, as it’s made without preservatives to help it last longer at room temperature. Some stores, like Trader Joe’s and Meijer, sell their own sprouted bread.

There are a few benefits to sprouted grains. According to Kristina Secinaro, a registered dietitian at Harvard-affiliated Beth Israel Deaconess Medical Center, germinating grains breaks down the starch, which makes the percentage of nutrients higher. This can make it easier for people who are sensitive to grains to digest.

“It also breaks down phytate, a form of phytic acid that normally decreases absorption of vitamins and minerals in the body. So sprouted grains have more available nutrients than mature grains,” Secinaro told Harvard Health. Nutrients include folate, iron, vitamin C, zinc, magnesium, and protein.

Which Bread Is Vegan?

Still not sure which bread to try? Here are a few vegan-friendly bread brands that you can find almost everywhere.

Milwaukee-based brand Dave’s Killer Bread makes organic whole wheat bread, bagels, and English muffins. The company fosters sustainable agricultural practices and organic farming through seed tests, apprentice programs, and farm sponsorships. This socially-minded brand is also committed to removing the stigma from hiring employees with criminal backgrounds. Its Second Chances Project is for employees who “are ready to change their lives for the better.” Try anything from Dave’s Killer Bread — the only non-vegan product is the Honey Oats & Flax bread.

Nature’s Own offers a couple of vegan options, like the 100 % Whole Wheat Sandwich Rolls (which double as hamburger buns) and the 100% Whole Grain bread. It’s made without artificial colors, preservatives, and flavors and is free from high fructose corn syrup.

Canadian brand Little Northern Bakehouse has a wide selection of vegan and gluten-free bread, including sandwich bread, hot dog rolls, bagels, and pizza crust. All products are made in a certified gluten-free facility, so it’s suitable for coeliacs. Only one sprouted loaf contains honey, which is clearly marked.

Food for Life’s Ezekial bread is all-vegan and made with sprouted grains, refined sugar, and artificial preservatives. It’s also a flour-free brand, relying on a blend of sprouted wheat, barley, beans, lentils, millet, and spelt.

According to the website, all Mission tortillas are made without animal products, making them suitable for vegans. The brand makes flour tortillas, corn tortillas, and wraps.

Thomas’ is available in most grocery stores across the country and while the English Muffins aren’t vegan (they contain whey), the plain bagels, bagel thins, pita, and Sahara tortilla wraps are. Try a bagel with some vegan cream cheese.

Making Your Own Bread

Premade bread is convenient, but if you’ve ever thought about baking your own, here are a few recipes to get you started.

This no-knead bread recipe requires only one hour of active prep time (but remember to give it 18 hours to rise). It takes only four ingredients and has a nice, crusty texture perfect for pairing alongside pasta with a pat of dairy-free butter.

How to Make Sourdough

The pressure’s off with this easy sourdough bread recipe. There is no kneading and you need only four ingredients: sourdough starter, flour, water, and salt. Once you’ve made your own sourdough, you may never want storebought again.

Simple focaccia, best served warm and finished off with a drizzle of extra virgin olive oil and flaky sea salt. You’ll finish it off in no time. 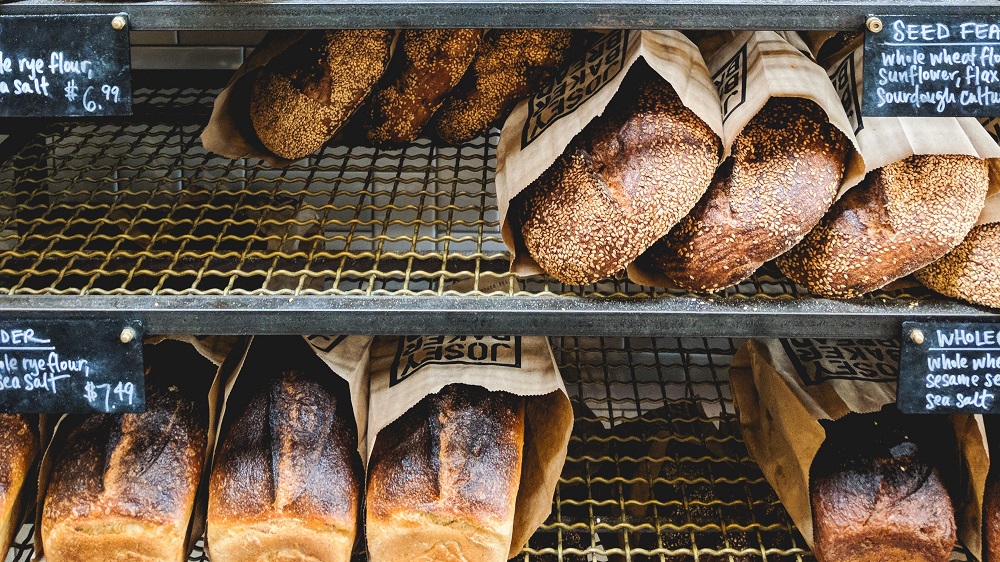 Article Name
Is Bread Vegan? Everything You Need to Know
Description
Is all bread vegan? Learn how bread is traditionally made, which bread ingredients are vegan, what sprouted bread is, and how to make sourdough.
Author
Kat Smith
Publisher Name
LIVEKINDLY
Publisher Logo