Honey — it’s a popular “better-for-you” sweetener for tea and baked goods alike, but because it’s made by bees, the question of its vegan status is an on-going discussion in communities.

Bees make honey, but how does it happen?

First, nectar — a sugary liquid found in flowers — is collected by a honeybee using its proboscis, a long straw-like tongue. The insect then stores the nectar in its extra stomach, called a “crop.” Nectar is so important to bees that if one forager finds a good source, she’s able to communicate it to her fellow bees via a series of dances.

Pollen is just as important: the yellow granules found in flowers are a food source for bees, rich in proteins, lipids, vitamins, and minerals. Those are stored in empty honeycombs and may be used to make “bee bread,” a fermented food the insects make by moistening pollen. But, the majority of food is collected via foraging. 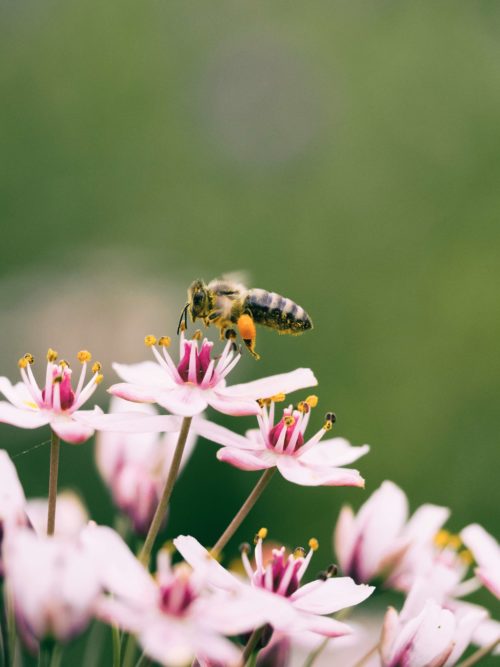 While bees buzz around collecting pollen and nectar, enzymes in its crop mix with the nectar it already has. This transforms its chemical composition and pH, making it better for long-term storage.

Once the honeybee returns to its hive, it passes the nectar to another bee via regurgitating into its mouth (hence why some call honey “bee vomit”). The process is repeated until the nectar, transformed into a thicker liquid rich with stomach enzymes, is deposited into a honeycomb.

The bees still have more work to do to turn nectar into honey. The industrious insects use their wings to “fan” the nectar, speeding up the evaporation process. Once the majority of the water is gone, the bees finally have honey. One bee will seal up the honeycomb via secretion from its abdomen, which hardens into beeswax, and the honey can then be stored indefinitely. From start to finish, bees reduce nectar’s 90 percent water content to 20 percent.

According to Scientific American, a colony can bring in about 250 pounds of nectar — a significant feat considering that most flowers will yield only the tiniest drop of nectar.

A typical jar of honey requires an astounding one million flower visits. One colony can produce between 50 to 100 jars of honey per year.

Bees put in a lot of work to make honey with good reason.

According to BeeSpotter, the average colony consists of around 30,000 resident honeybees. It’s estimated that the bees will use between 135 to 175 gallons (or about 2,100 pounds worth) of honey annually. 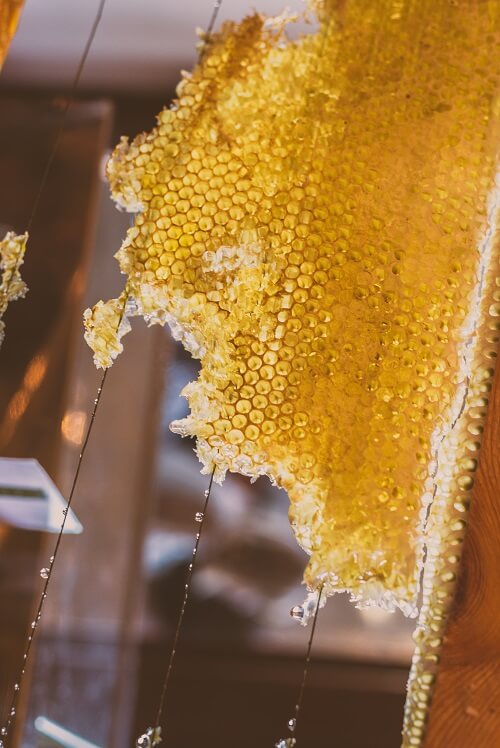 Honey is critical to bees’ survival

Pollen is a bee’s primary food source, but honey is important as well. Worker bees use it as a carb source to keep their energy levels up. It’s also consumed by adult drones prior to mating flights and is essential to helping larvae grow up. When nectar is scarce, it leads to a high chance of developmental failure in adults.

One of honey’s most important uses is during the winter, when worker bees and the queen cluster together and metabolize it to generate heat. There are few flowers to pollinate after the first frost, so honey becomes a vital food source. The action helps protect the colony from cold weather, keeping it at a cozy 85°F. The colony will perish if honey supply falls short.

Honey has been part of the human diet for thousands of years.

Alyssa Crittenden, a behavioral ecologist and nutritional anthropologist at the University of Nevada, Las Vegas, wrote of the history of honey’s human consumption in the journal Food and Foodways. She argues that honey may have been an important food source in the vein of meat and potatoes in helping early members of the genus Homo evolve. 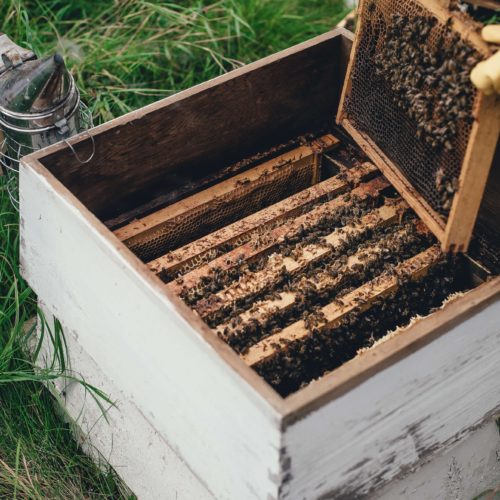 Honey is ‘harvested’ from kept bees

While there are no fossils to prove that early humans ate honey, there is evidence. Rock art depicting honeycombs, swarms of bees, and collecting honey that dates back as far as 40,000 years ago has been found in Africa, Europe, Asia, and Australia.

Crittenden points to a number of other hints that early humans may have included honey in their diets. Primates like baboons, macaques, and gorillas are known to eat honey. Because of this, she told Smithsonian, “it is highly likely that early hominids were at least as capable of honey collection.”

Science Magazine bolsters this argument with further evidence: Egyptian hieroglyphics depicting bees dates back to 2400 B.C.E. Beeswax was found lining 9,000-year-old clay pots in Turkey — it’s speculated that this was to waterproof pots or it could be a residue of honeycomb used as a sweetener. Honey was found in Egyptian Pharoah tombs.

It’s possible that honey, like meat, milk, cheese, and eggs, may be a longstanding part of the human diet. But is eating honey part of vegan ethics?

According to The Vegan Society, “Veganism is a way of living which seeks to exclude, as far as is possible and practicable, all forms of exploitation of, and cruelty to, animals for food, clothing or any other purpose.”

Going by this definition, honey is out, as it’s using animals for food. But some might argue that while commercially produced honey isn’t okay, honey collected from backyard bees is. But The Vegan Society maintains that no honey is vegan:

“Honey is made by bees for bees, and their health can be sacrificed when it is harvested by humans. Importantly, harvesting honey does not correlate with The Vegan Society’s definition of veganism, which seeks to exclude not just cruelty, but exploitation.”

Not only is honey important to a colony’s survival, but it’s also a labor-intensive task. The Vegan Society notes that each bee will make only a twelfth of a teaspoon of honey in their lifetime.

The practice of taking honey from bees may also hurt the hive. When conventional beekeepers “harvest” honey, they replace it with a sugar substitute that lacks the micro-nutrients found in honey.

It’s also not as quaint as wild bees buzzing to-and-fro collecting pollen. Much like livestock, honeybees bred for efficiency — they are bred specifically to increase productivity. The narrow gene pool that results from selective breeding makes the colony more susceptible to diseases and large-scale die-offs. 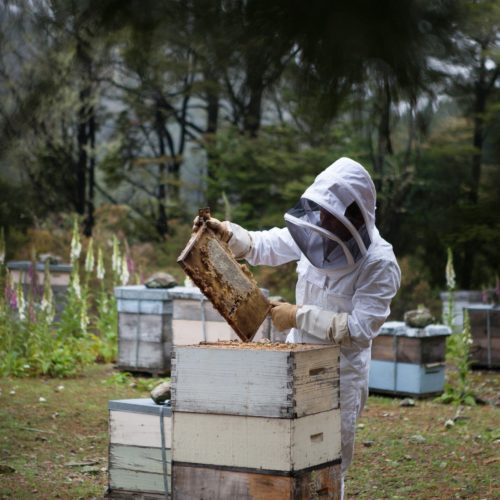 Is it vegan to eat honey?

Additionally, colonies are regularly culled post-harvest in the name of keeping costs down. Queen bees, which would typically leave the hive to start new colonies, have their wings clipped.

Honeybees are traded for purposes of pollination and honey-making, but they are not native to North America and their presence has a negative effect on fellow pollinators as well as the environment.

Diseases caused by overbreeding can spread to native pollinators like bumble bees, who do the job of pollinating better than honeybees, according to research from the University of California.

Other studies have found that honeybees have a negative effect on native pollinator populations, but the issue is complicated — honeybees contribute $20 billion to US crop production annually.

Honeybees face other issues, such as Colony Collapse Disorder (CCD), a mass mysterious die-off of bees which has been linked to pesticides, stress from being transported like livestock for “pollination services,” and other issues, according to the EPA (Environmental Protection Agency). CCD has declined in recent years but its causes are still not fully understood. Most of the world’s honey is collected from these bees used to pollinate mono-culture crops.

For honey that comes from backyard bees, some might eat it, while other vegans avoid it because bees make it for themselves, not humans.

Is There Vegan Honey?

While not eating crops pollinated by farmed bees isn’t practical or possible for the majority, it is possible to avoid honey by not eating or buying it. Apart from liquid sweeteners like maple syrup, dandelion honey, and date syrup, there are also vegan honey-style option available — here are a few bee-free options to try. 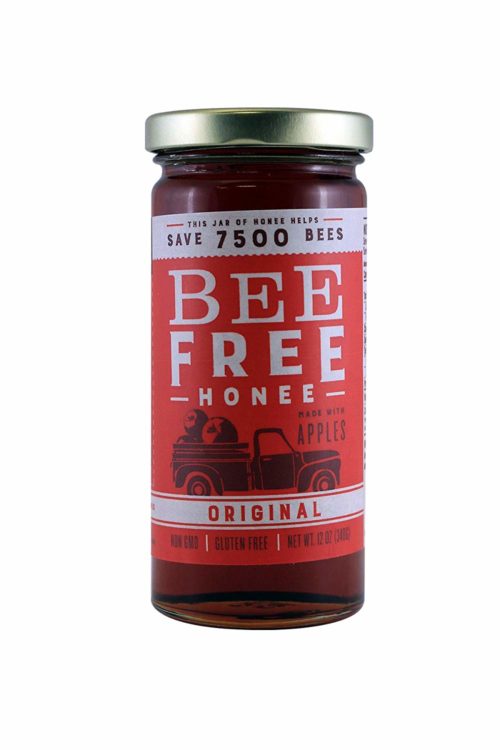 Bee Free Honee is made from organic apples

Founded in 1999, Bee Free Honee has been making ethical honey for two decades. The company makes its liquid sweetener from organic apples that have been juiced and concentrated, with a touch of cane sugar and fresh lemon juice added. It offers three varieties: Original, which is good for baking, marinades, and sweetening tea; Slippery Elm, which soothes sore throats; and Flower Pollen Infused, which offers the same nutritional profile as raw honey, no bees harmed. 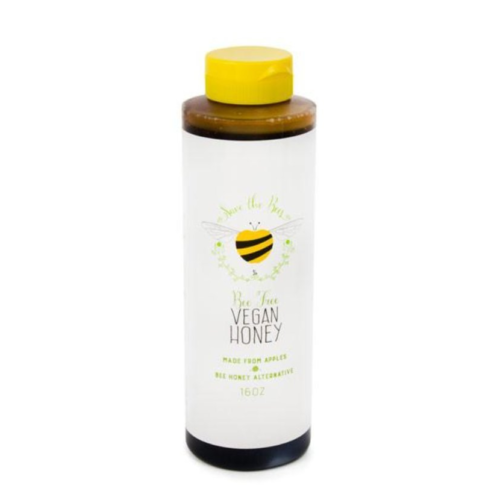 Founded by former professional Vitamix demonstrators and brothers, Rodney and Danny, BlendItUp made its mark with its Southwest Spice Blend, but the brand also makes Vegan Honey. Made from apples and nothing else, it can be used any way you would normally use honey. Try it drizzled over pancakes, swirled into oatmeal, or in smoothies. 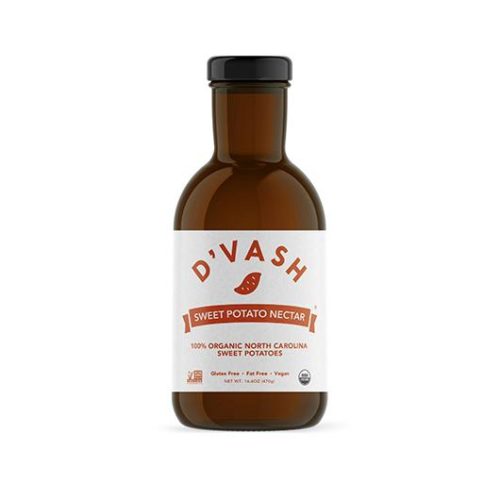 Known for its syrupy date nectar, D’vash Organics made what it claims is the world’s first sweet potato honey. Made from organic North Carolina sweet potatoes, it has a sweet and crisp flavor and golden, honey-like texture. Try using it in both sweet and savory dishes like baked goods, marinades, and dressings.