Pasta is the most popular food in the world, according to a global survey conducted by Oxfam in 2011. Separate research — listed on restaurant survey website Zagat — found that nearly half of people in the U.S. eat pasta twice a week. But as more people switch up their diets for health, environmental, and ethical reasons, you might ask yourself: is pasta vegan? Thankfully, there’s no need to give up pasta on a plant-based diet. Here’s how to buy and make vegan pasta. 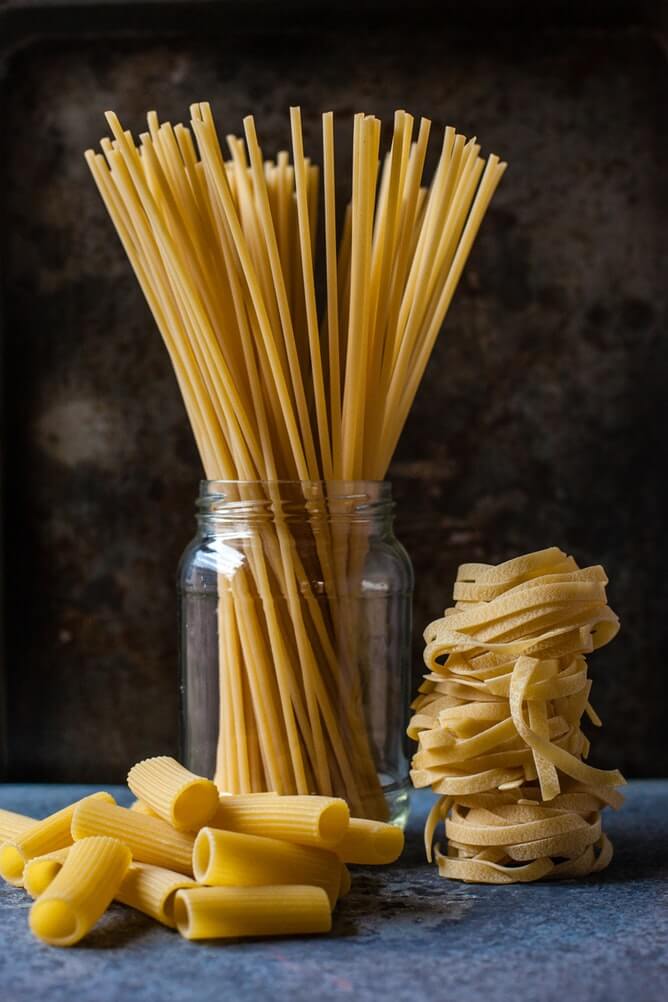 Most packaged pasta is vegan.

Is All Pasta Vegan?

Pasta has been around since at least the 1st century AD, according to the writings of Horace, a Roman lyric poet. Pasta originated in Italy, where people traditionally mixed unleavened dough or durum wheat flour with water or eggs. There are now more than 300 forms of pasta. Not all of them are vegan; fresh pasta is sometimes made with egg (although oil can be used instead of egg). Most packaged pasta is vegan, but it’s a good idea to check the ingredients just in case. 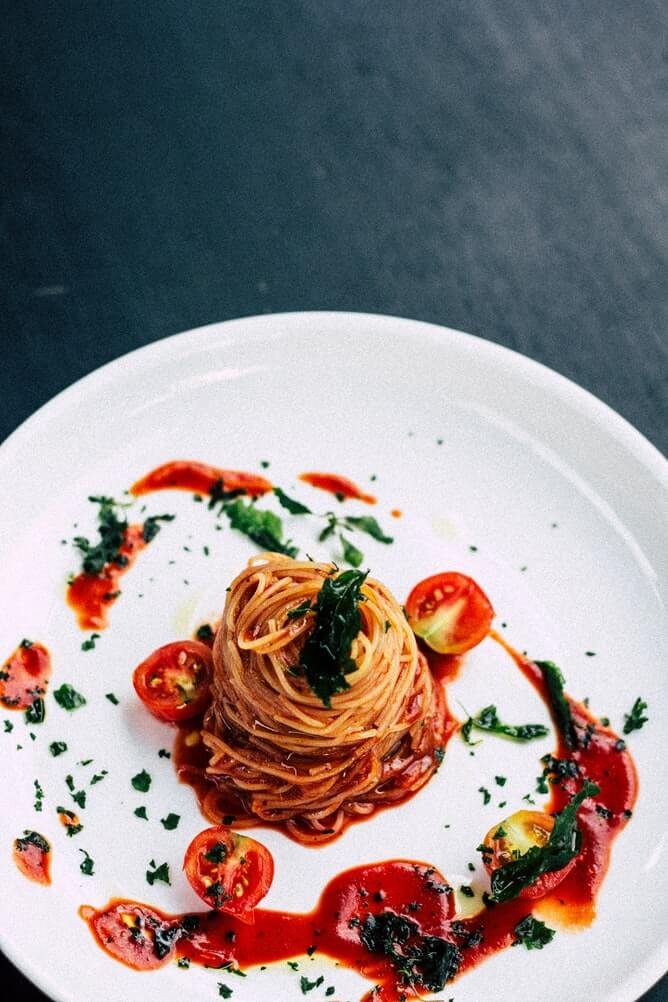 Pasta is often made from durum wheat flour.

Most pasta is made with semolina or durum, a type of wheat flour. Sometimes rice, barley, corn, quinoa, or spelt is used instead. Salt and water are typically included in pasta recipes.

Thankfully, the majority of store-bought pasta is vegan. But, here are some of our top picks for brands.

This pasta company recently dipped its toes into the plant-based market when it launched its vegan ravioli range. The range includes flavors Roast Capsicum & Olive, Sundried Tomato & Basil, and Spinach & Garlic. San Remo doesn’t use any artificial colors, flavors, or preservatives in its recipes. The Roast Capsicum & Olive version offers 27.6 grams of protein per serving. 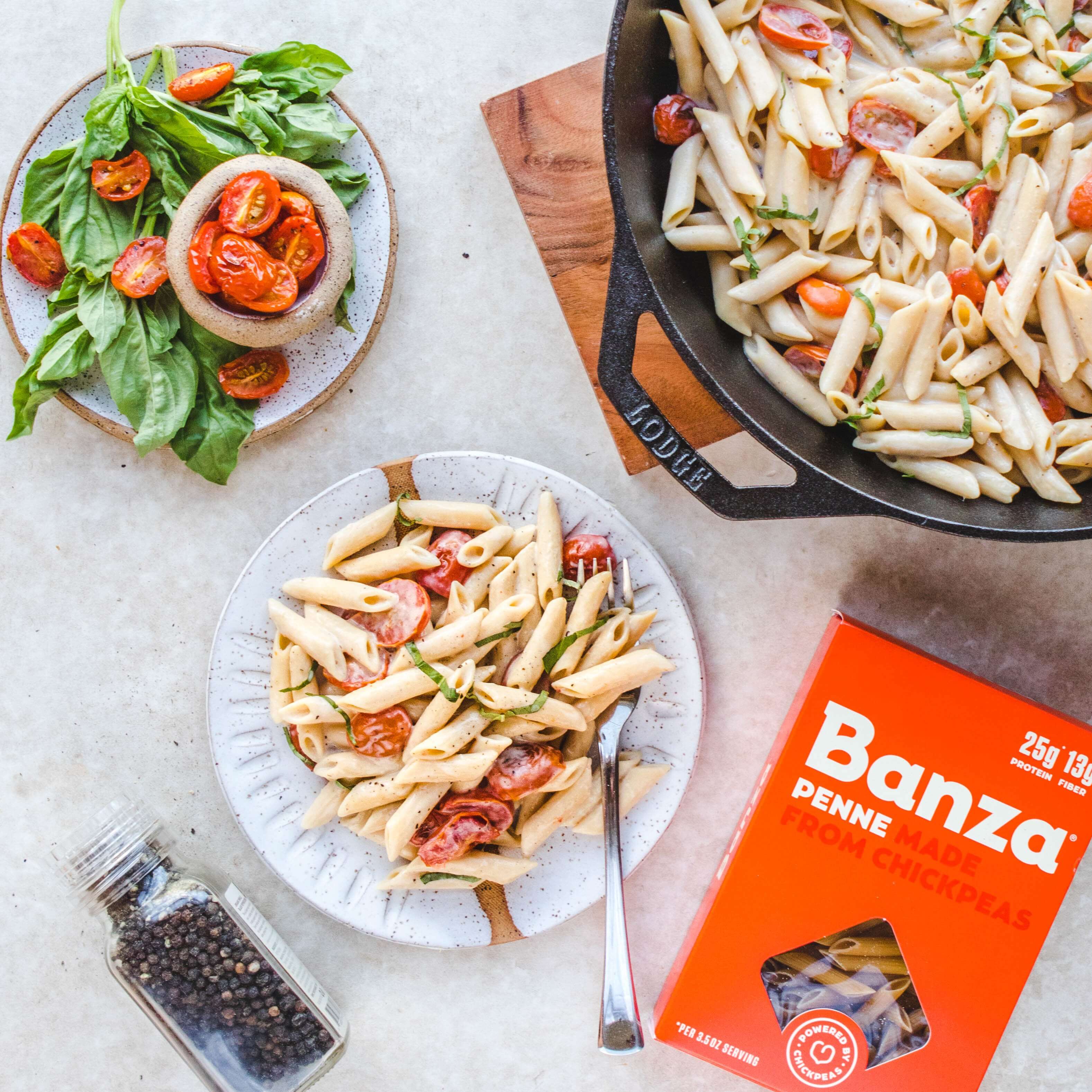 This vegan pasta is made out of chickpeas. | Banza

Banza produces pasta made from chickpeas. The result is a product that has 23 grams of protein — versus the 13 grams found in regular pasta — and 8 grams of fiber, which is 5 more than conventional kinds. It also has fewer net carbs. The vegan chickpea pasta is available in forms penne, rotini, bowties, elbows, and shells. 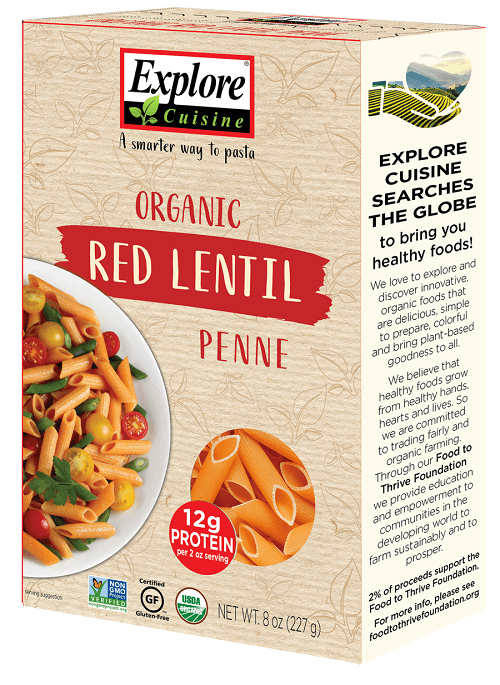 This pasta is made from red lentils.

These grain-free, gluten-free noodles are made from red lentils, so it has a higher protein content than your average pasta. Use these however you would use penne pasta. 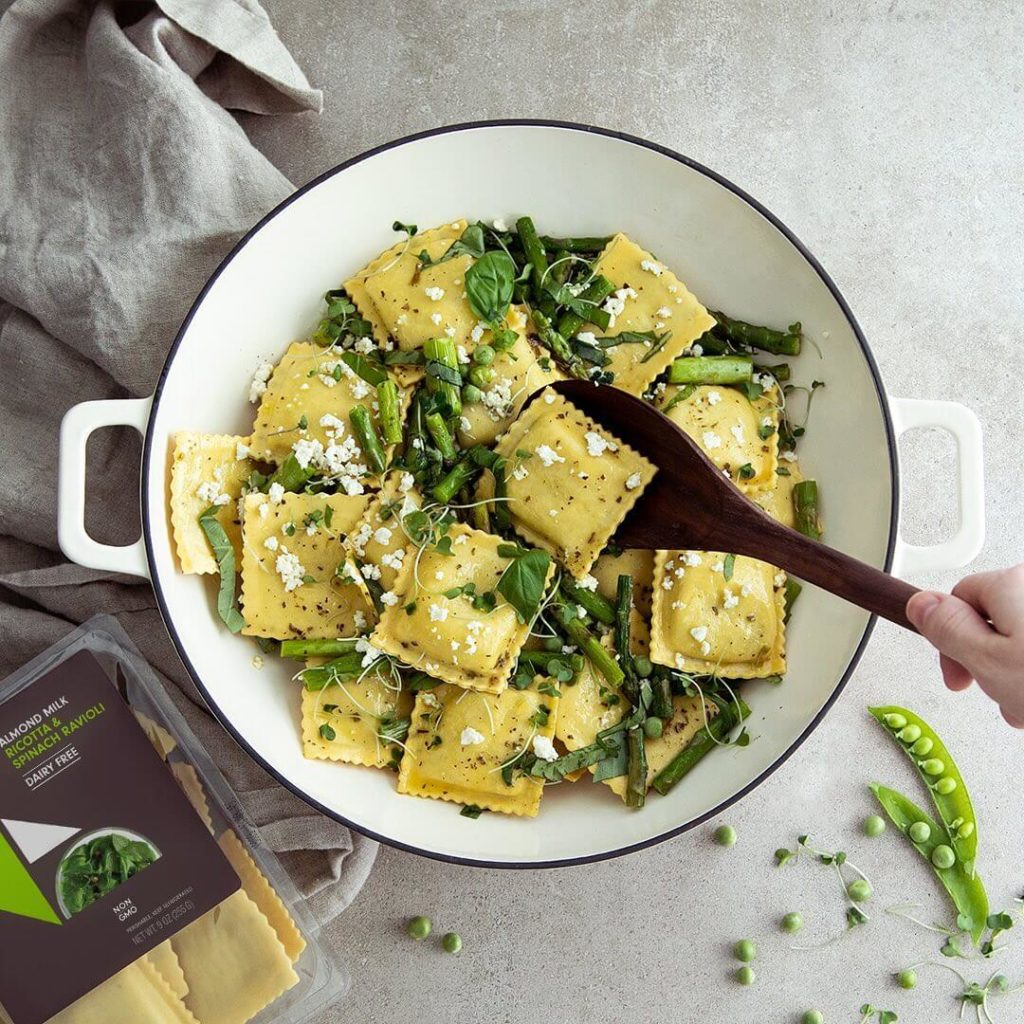 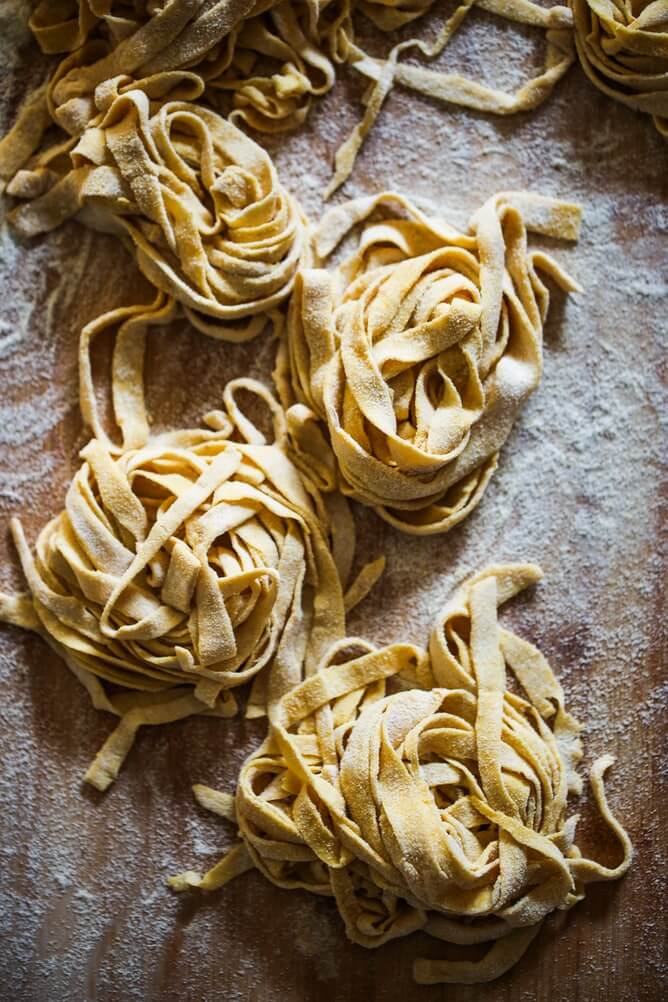 You can make your own vegan pasta at home.

How to Make Vegan Pasta

Some people aren’t a fan of store-bought food. Or maybe you mostly are but like to flex your cooking muscles every now and then. Whether you’re a Michelin-star chef or a proud instant ramen-lover, here are three recipes for ridiculously good, homemade vegan pasta. 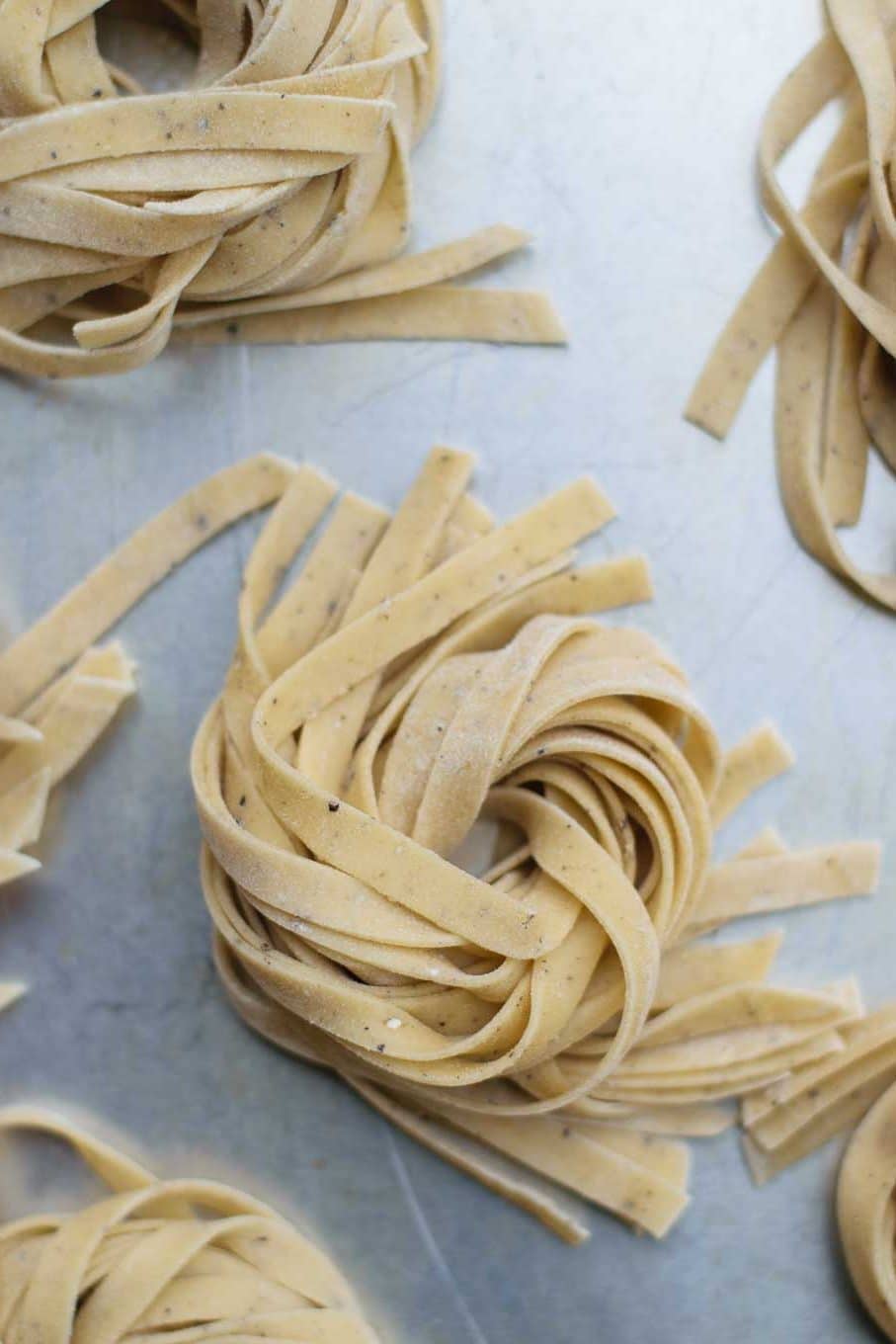 This vegan pasta is made with aquafaba, sea salt, and black pepper. | The Curious Chickpea

This fresh pasta recipe replaces the egg with aquafaba, the viscous water in which chickpeas are cooked. Flour, sea salt, olive oil, and black pepper are the only other ingredients. The vegan pasta can be cut into thin spaghetti or wide noodles. 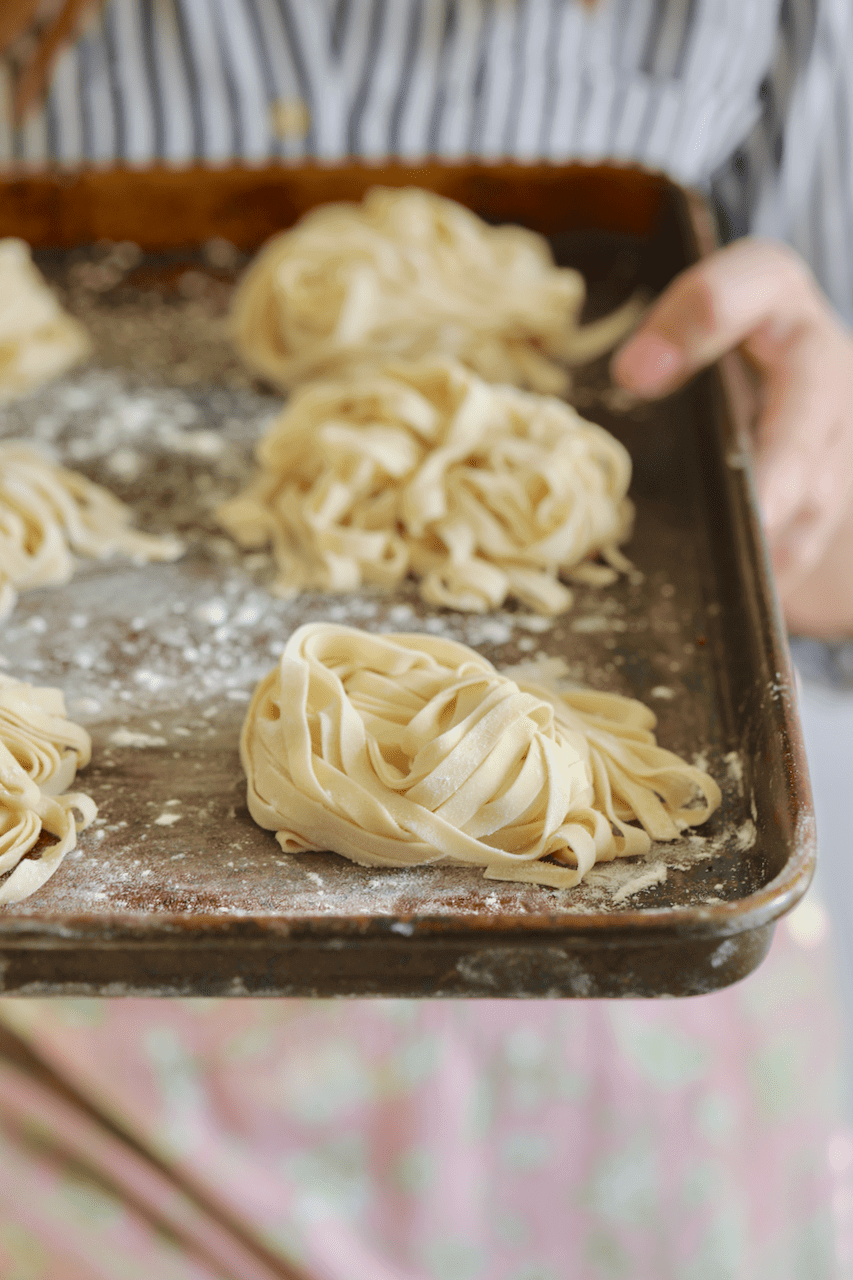 You can freeze this vegan pasta for up to eight weeks. | Bigger Bolder Baking

Water, olive oil, and all-purpose flour are all you need to make this fresh vegan pasta. Once you’ve made it, it takes 1-2 minutes to cook. You can even freeze it for up to eight weeks. 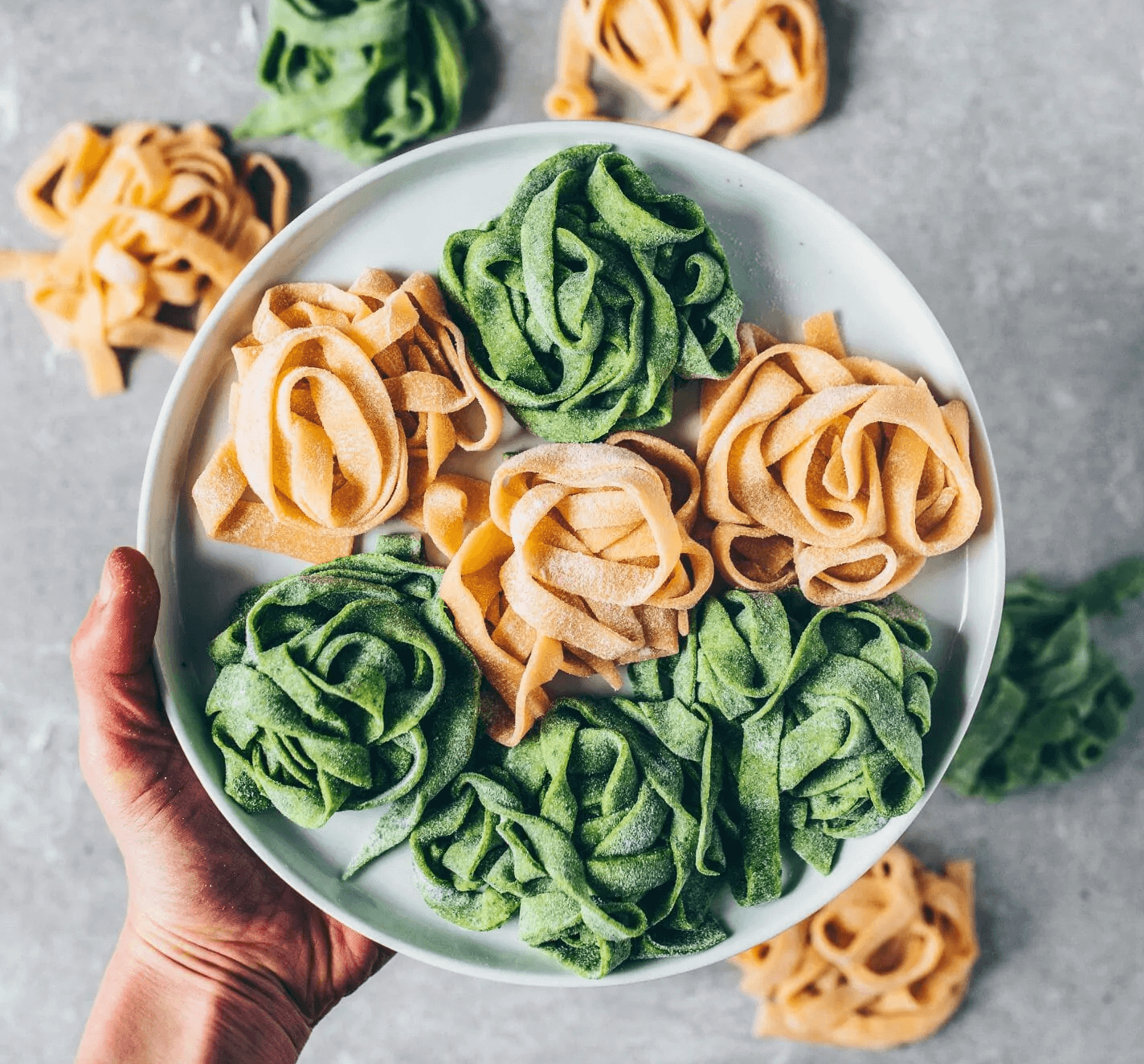 This vegan pasta comes with a bonus recipe. You can make plain, egg-free homemade pasta or a spinach version. You could even make both to add a bit of variety to your next homecooked meal.

So now that you’ve mastered the art of vegan pasta (or, you know, fumbled through some recipes), it’s time to put those skills to use with some mouthwatering pasta recipes that are meat- and dairy-free. 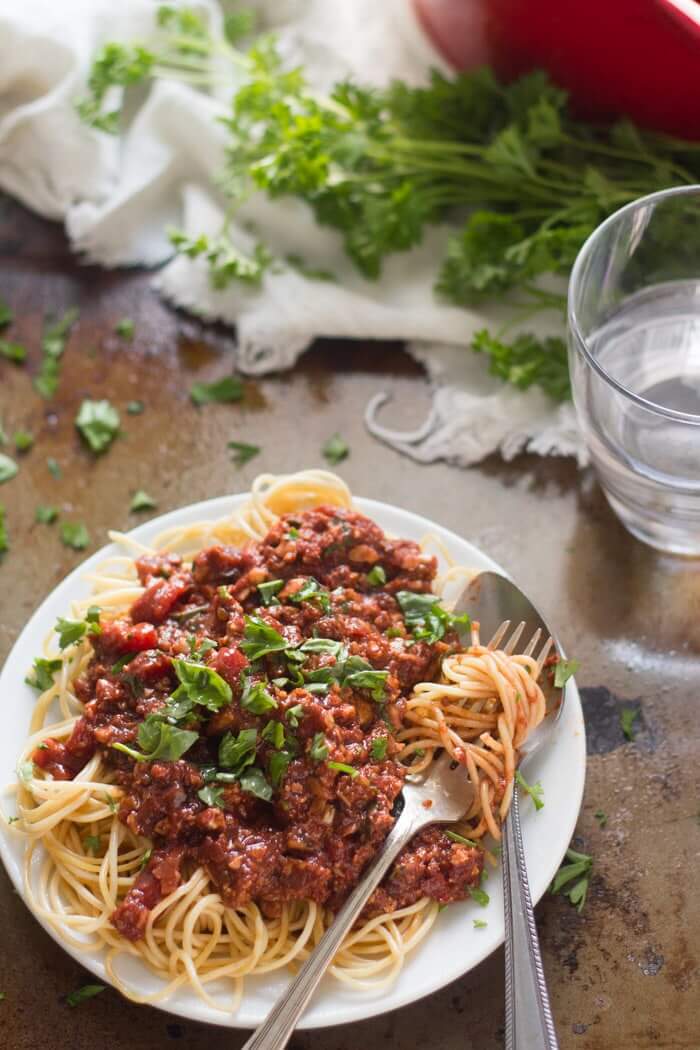 This unique twist on a classic dish sees cauliflower and walnut crumbles joining forces to create a meaty, zesty tomato sauce. It offers 20 grams of protein and contains no cholesterol. This vegan dish could be the ultimate comfort food. 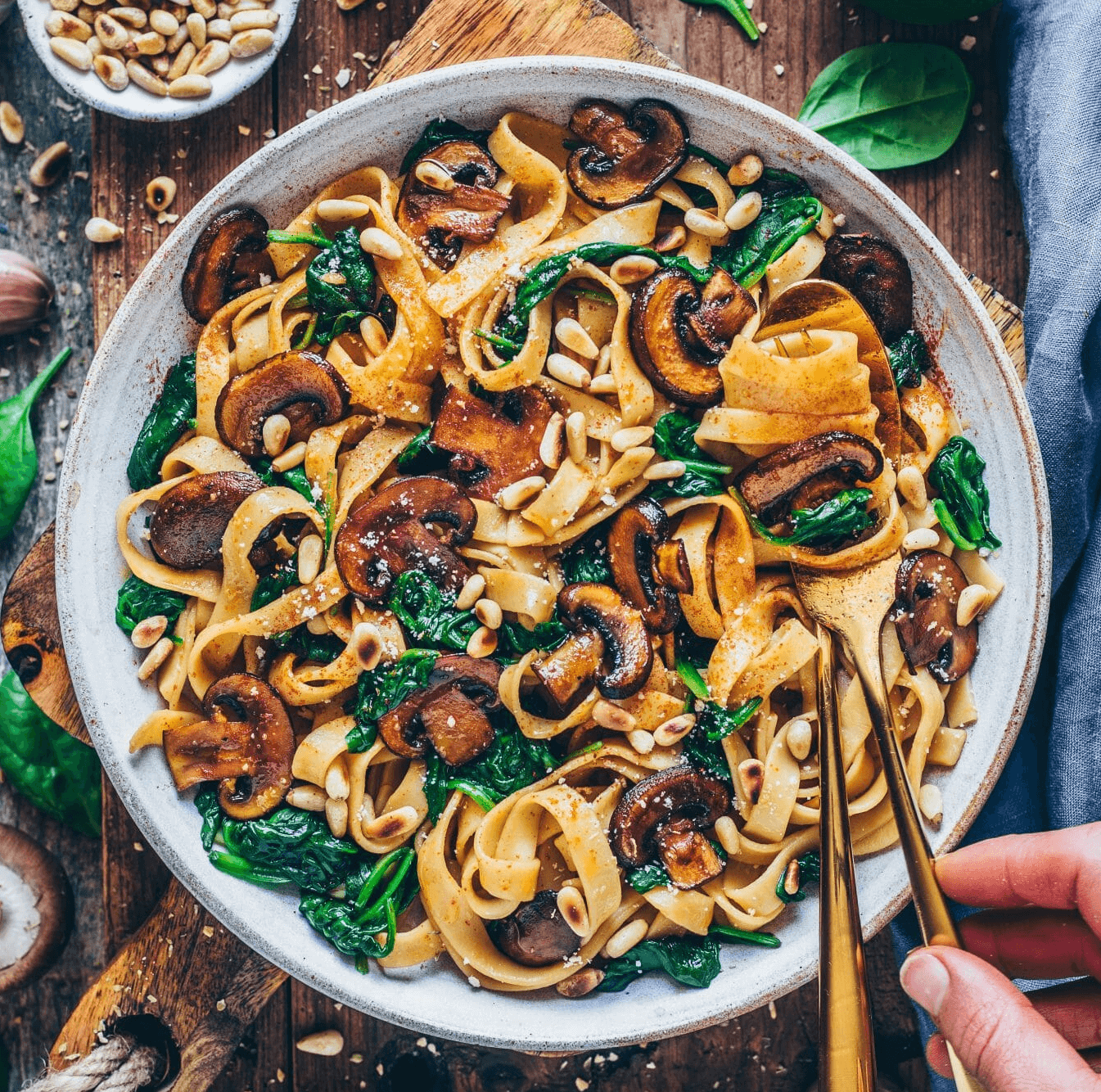 This vegan pasta is topped with pine nuts. | Bianca Zapatka

You can use any type of pasta you like in this dish. The recipe features onion, garlic, mushroom, baby spinach, and soy sauce. The pasta is topped with smoked paprika and pine nuts, although you can also use sesame seeds or cashews. Want a tip? Sprinkle dairy-free parmesan on the meal before you tuck in. 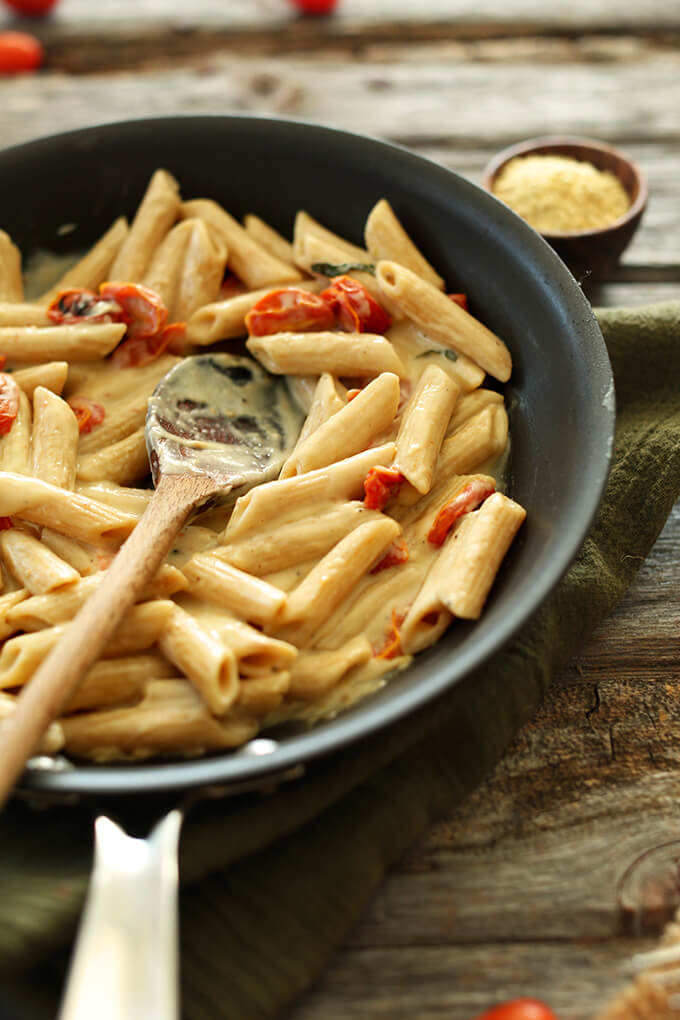 This vegan garlic pasta is creamy and comforting. | Minimalist Baker

Dinner can be ready in 30 minutes with this creamy garlic pasta recipe. The recipe creator describes the dish as rich, garlicky, warm, and comforting. You’ll need tomatoes, shallots, and Almond Breeze (or veggie stock, if you prefer). 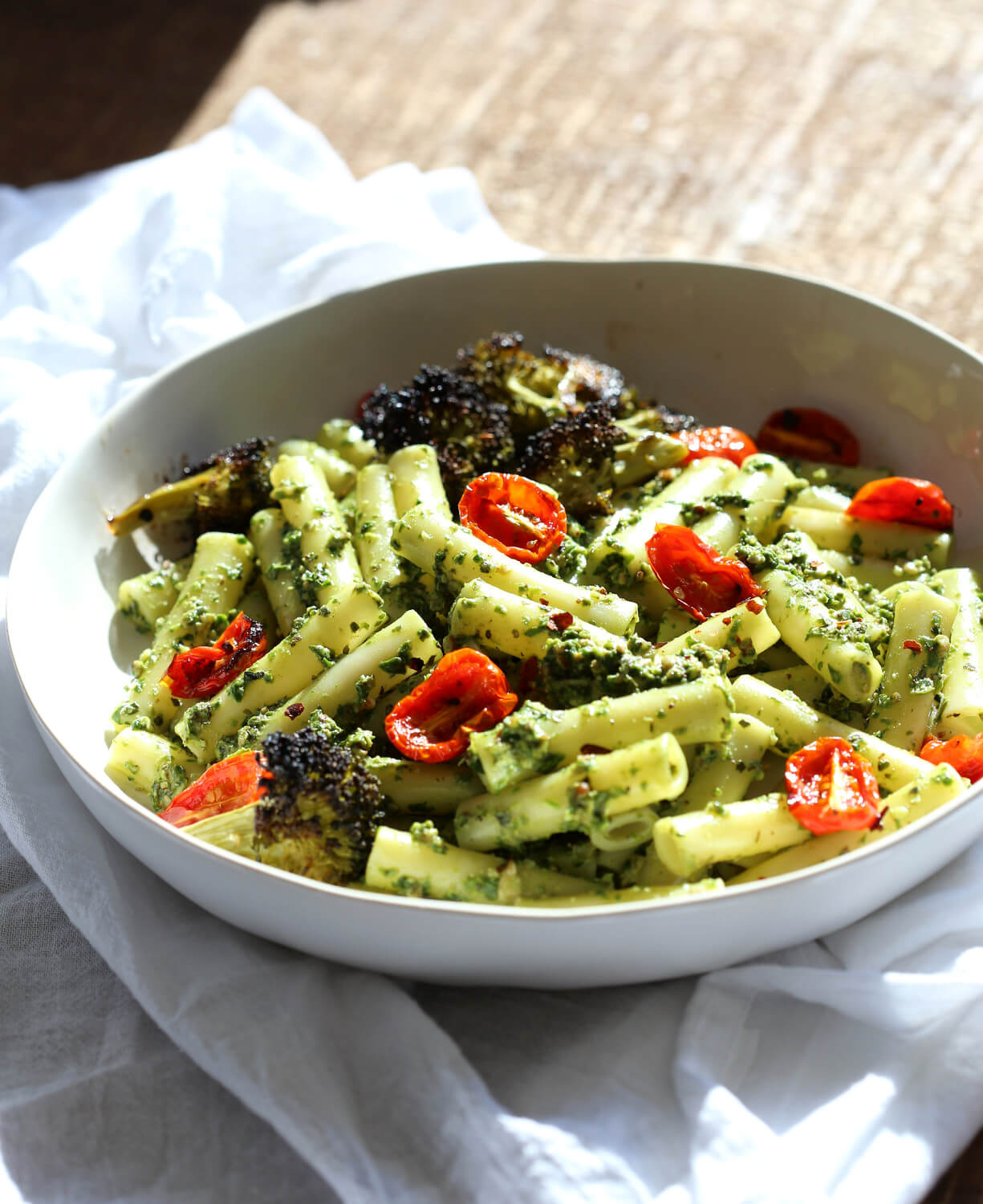 This is the summer vegan pasta you’ve been waiting for. | Vegan Richa

“Summary, vibrant, and flavorful” is how the recipe creator describes this vegan pesto pasta. This meal can be made in just 10 minutes. It will give you your veggie fix — it includes fresh basil, roasted broccoli, cauliflower, and cherry tomatoes — and tastes so good, you’ll be adding it to your go-to recipe list. 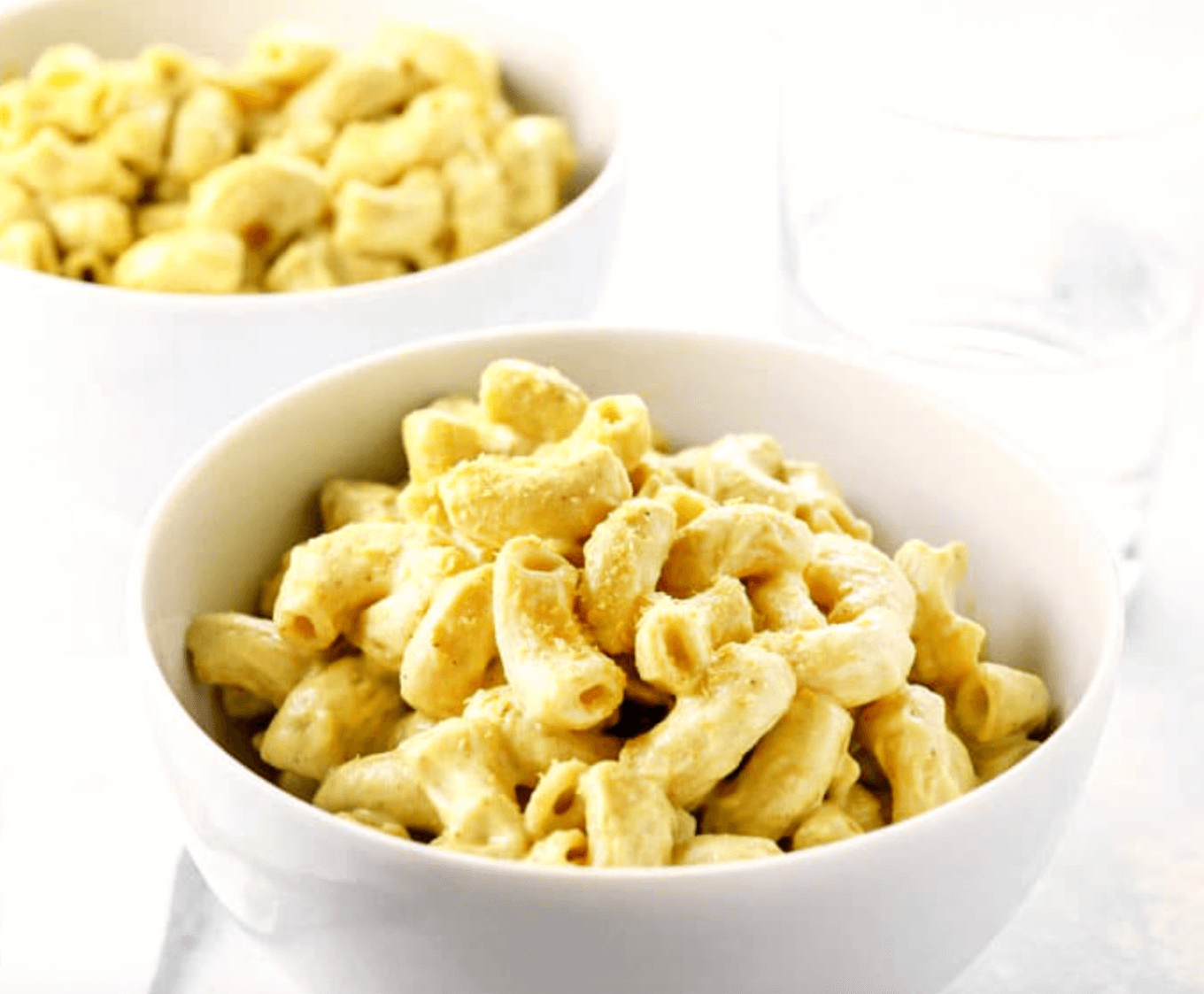 This mac ‘n’ cheese is dairy-free and delicious. | Detoxinista

Make this vegan mac ‘n’ cheese with cashews, spices, lemon juice, and mustard. It has a slight kick to it, and pairs nicely with onion and mushrooms. The super creamy cashew sauce will keep you coming back to this recipe again and again.