A tuna salad sandwich is a lunchtime staple for a lot of reasons. It’s convenient — just three ingredients if you’re not picky — and fish is supposed to be good for you, right?

But is tuna really as healthy as we think?

Concerns over ocean plastic pollution and mercury have led a lot of people to question its supposed benefits. There’s also the ethical downside. Overfishing is one of the biggest drivers of declining ocean wildlife populations. Then, there’s the knowledge that fish are more sentient than we once thought.

Vegan seafood company Good Catch Foods found a way to make tuna better than the real thing. It’s kinder to the ocean, sea life, and it comes without the health risks.

“Our goal was to create a product that has the same texture, flavor, and nutritional value as real tuna – without harming our oceans and sea life,” explains Chad Sarno, Good Catch Foods co-founder and vegan chef.

“Innovation is driven by demand,” says Sarno. “And when it comes to food, I think demand is also driven by taste, convenience, and most importantly in my opinion — the impact opportunity.”

Sarno calls it “seafood without sacrifice” — a concept that applies to more than just the health of the planet. It also stands up to the health benefits of real fish. 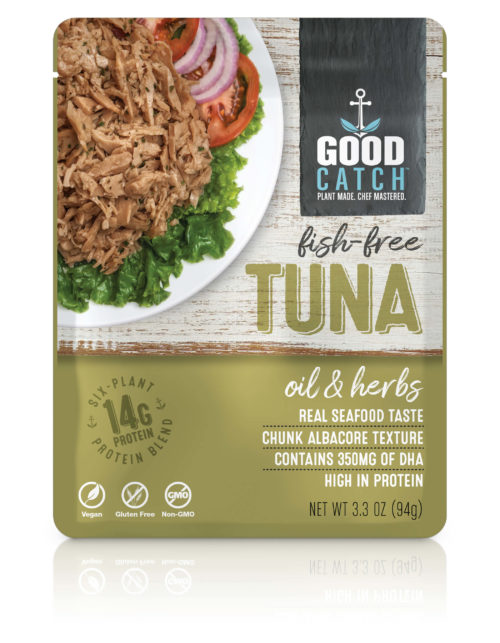 “We start with our proprietary six-legume blend (chickpeas, soy, peas, lentils, fava, and navy beans), which are packed with flavorful protein, and combined with our unique process create the unmistakable light, flaky texture of fine seafood,” says Sarno.

The blend creates a taste and texture similar to canned tuna. It has a light, flaky texture and a fishy flavor that doesn’t overwhelm the senses. And the ingredients come with a long list of health benefits. “One thing we pride ourselves on with this fishless tuna is that we’re using real ingredients and real food—not synthetic flavors,” says Sarno.

“Our products are high in protein and packed with healthy omega-3 fatty acids, which is what people look for in fish. Our tuna delivers all of what people like,” he adds.

Another bonus: it doesn’t have the same, strong fishy flavor as the real thing, so your co-workers won’t stare daggers at you for bringing in a tuna salad sandwich.

Plant-based food, particularly legumes, are celebrated health foods. Legumes are high in B vitamins including iron, calcium, phosphorous, zinc, and magnesium, according to the Dietitians Association of Australia. Iron is essential for blood production. Calcium helps maintain bone strength and plays a role in blood clotting. Zinc plays a role in making protein and a healthy immune system.

Legumes provide a healthy source of carbohydrates; they’re also low in fat and have a low glycemic index. Studies have shown that a diet rich in plant-based food — legumes in particular — can help protect against chronic health conditions including heart disease, type-2 diabetes, hypertension, and certain cancers.

Legumes are also a good source of plant-based protein — one 3.3-ounce pouch of Good Catch Foods’ “Naked in Water” tuna contains 14 grams of protein versus 16 grams in a 3-ounce can of Starkist Chunk Light Tuna.

Legumes give the Good Catch Foods vegan tuna another edge over traditional fish: antioxidants. Lots of them. Studies have shown that antioxidants may protect your body against damage caused by free radicals.

Oxidative stress — the imbalance between free radicals and antioxidants in the body — has been linked to chronic inflammation, diabetes, Parkinson’s disease, cataracts, and a number of other illnesses, according to the National Institutes of Health. An antioxidant-rich diet may lead to a lower risk of heart disease, cancer, and other health issues.

Then, there’s the fat.

Fish are touted for their high levels of omega-3 fatty acids, a type of polyunsaturated fatty acid crucial for eyesight, heart health, brain health, and reducing inflammation. The human body can’t make omega-3s on its own, so they must come from diet. A number of plant-based sources exist as well — nuts are great sources, too.

And humans can get marine omegas from the same source the fish do — algae oil. Not only is it a rich source of healthy fats, but, according to Sarno, it also lends a “superb umami flavor.” 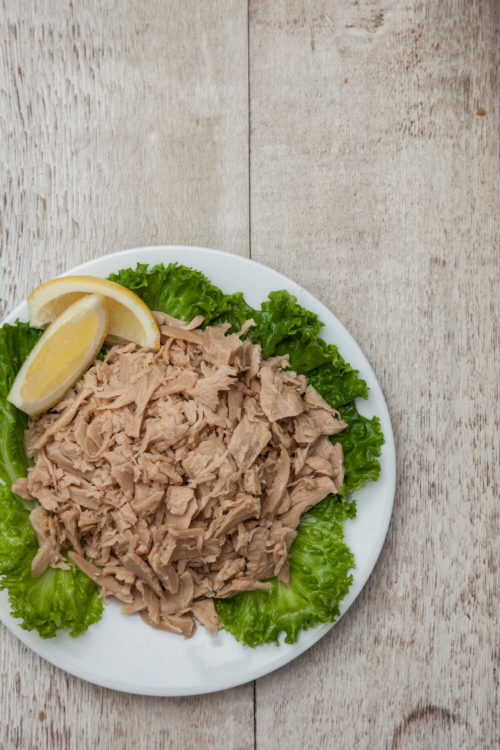 Good Catch tuna is made from six kinds of legumes

Because of its high fat content, fish was once promoted as “brain food” that could prevent cognitive decline — but this was debunked by a 2014 study in the American Journal of Preventive Medicine.

And the heavy metal risks may be more damaging than the benefits of the omega fats.

“Many of the larger fish, such as tuna can also contain toxic contaminants, like methylmercury, which pose well-documented risks to public health,” Sarno explains.

Contaminants found in fish, like mercury, are known neurotoxins. One study linked higher levels of omega-3s and DHA to dementia, Alzheimer’s Disease, and general cognitive impairment — the study was done downstream to a gold mine, a process that uses mercury and the fish were likely highly contaminated.

A 2012 study on omega-3 and cognitive function found that long-term, high fish consumption may actually negatively affect brain function, even in wealthy countries. Researchers studied a sample of individuals — mostly comprised of corporate executives — who reported eating three or more servings of “large-mouth” fish like tuna per month.

“It is worth identifying the irony in this situation; that is, the fact that corporate executives who chose to overconsume seafood for health reasons sustained a drop in their executive functions,” the study noted. “…As cognitive decline and dementia are increasing in prevalence as our population ages and seafood consumption is rising, this relationship could have a large impact on quality of life, morbidity, and health-care costs into the distant future.”

Studies have also found that because of plastic pollution, the majority of marine animals — freshwater and ocean, wild caught and farm-raised — are contaminated with plastic that ends up on our dinner plates. Experiments reveal that this has a negative effect on marine life, too. Some of the plastics found in fish — like BPA and flame retardants — are known endocrine disruptors, but the question remains as to whether or not the levels found in seafood can hurt people. It’s a question scientists are still trying to answer.

Experts generally maintain that fish is still part of a healthy diet, but its benefits can be obtained through Good Catch’s vegan tuna, which bypasses the fish and goes straight to the algae source– and it comes without all of the health risks. 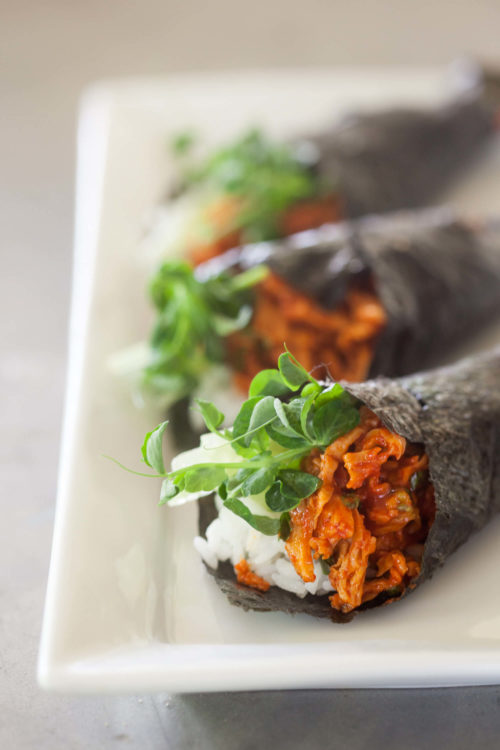 More Than Just Good For You

“The versatility of the product to be eaten in cold recipes such as a deli-style tuna salad, to warm applications such as a fishless curry, and fishless linguini makes our Good Catch products such an adaptable ingredient to get creative with,” says Sarno.

It’s also far more sustainable than traditional seafood. Overfishing is linked to the deaths of unintended marine species like dolphins, sharks, and sea turtles, called “bycatch” in the fishing industry.

“It is insane, with 85% of global fish stocks are overfished or fully depleted and Scientists predict that global fisheries will totally collapse by 2048. Clearly, our oceans and sea life need some attention,” says Sarno.