Vegan meat is hot. Major food companies like McDonald’s, Burger King, KFC, Subway, and Nestlé are dipping their toes into the plant-based scene to cater to growing demand.

As vegan meat enters the mainstream market, it attracts the attention of skeptics everywhere. Is vegan meat healthy? Or is it just as bad for you as animal meat? 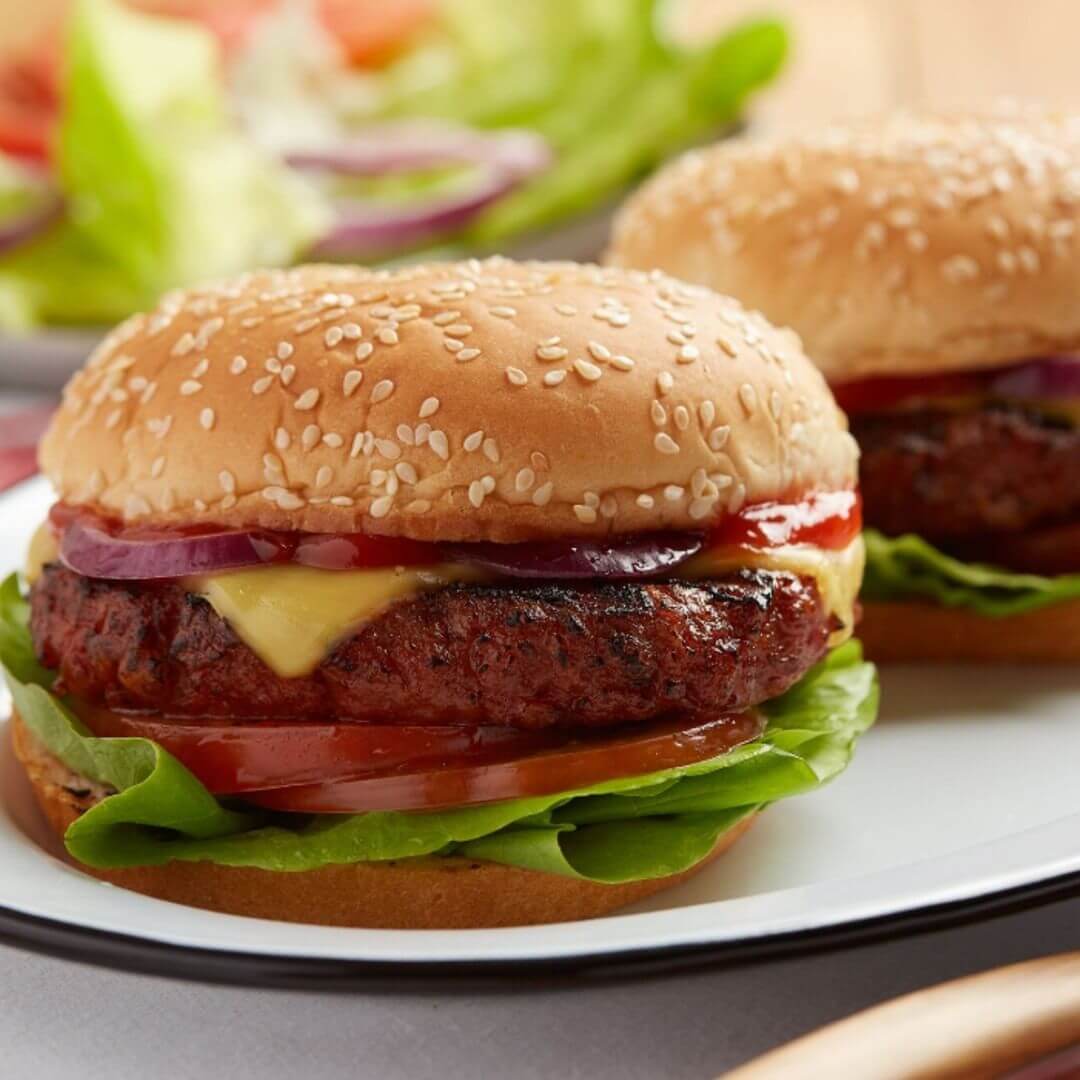 Experts say vegan meat is better for you than animal meat. | Lightlife

The sodium content of vegan meat has many questioning whether the product could actually be better for you than meat. A report from the George Institute for Global Health found that meat-free bacon contains more than a third of a day’s worth of salt. Consuming too much salt can raise blood pressure and lead to a heart attack or stroke.

The George Institute for Global Health study highlighted the undesirable nutritional elements of vegan meat but did not compare the plant-based products to their meat-based counterparts.

According to Consensus Action on Salt and Health, two rashers of animal-based bacon can contain more than half the daily maximum recommended salt for adults (6 grams). Some bacon brands contain three times more salt than others. 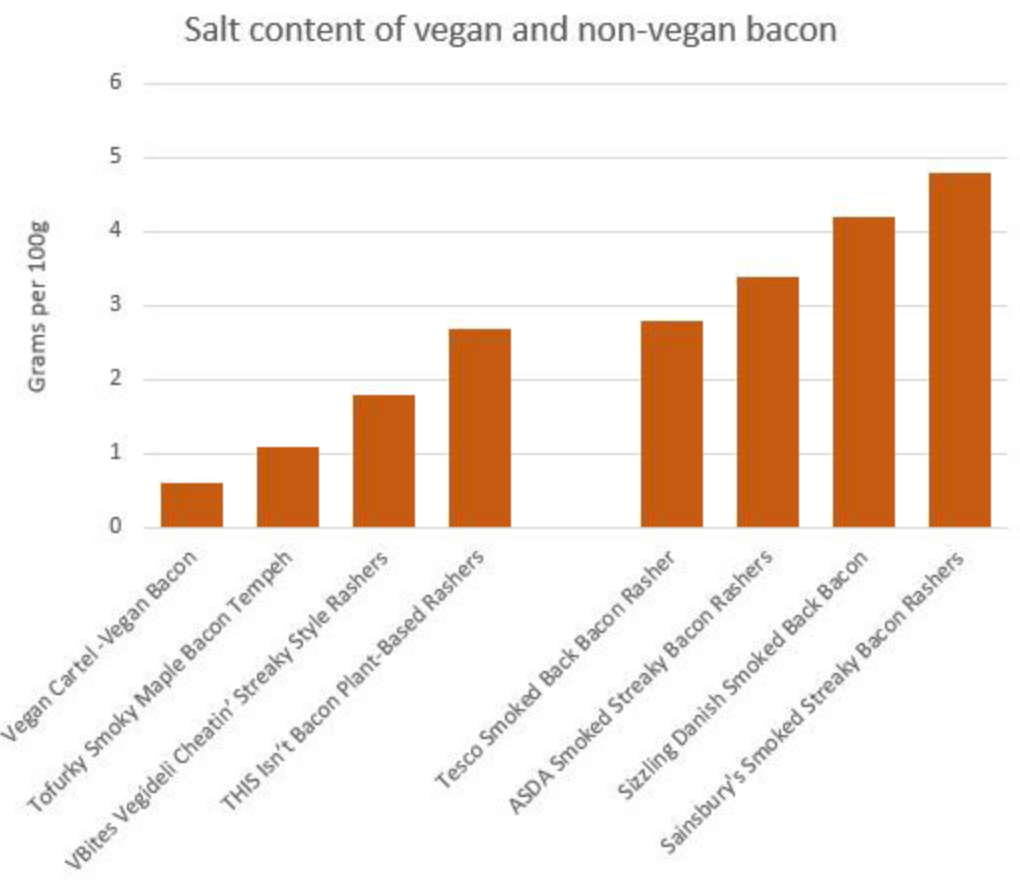 A lot of meat products have more sodium than plant-based meats. | Viva!

The sodium content of any product — vegan or not — will differ depending on the brand. The Beyond Burger has 380 mg of sodium — 16 percent of the total recommended daily limit. The Impossible Burger has 370 mg. Meanwhile, a McDonald’s hamburger patty (on its own, with no bun or other ingredients) has 125 mg. But not all vegan meat has this much sodium. And according to nutritionist and raw chef, Geeta Sidhu-Robb, salty vegan meat could still be better for you than animal meat.

“One negative often attributed to meat alternatives is the high levels of sodium used to preserve the food and improve the taste, which can be damaging to your kidneys,” Sidhu-Robb told Metro. “However this is not to say that genuine meat is not pumped with preservatives, unhealthy oils, additives and salts meaning that, in the balance of things, alternatives are actually healthier than processed meat – it just depends which substitute you opt for.” 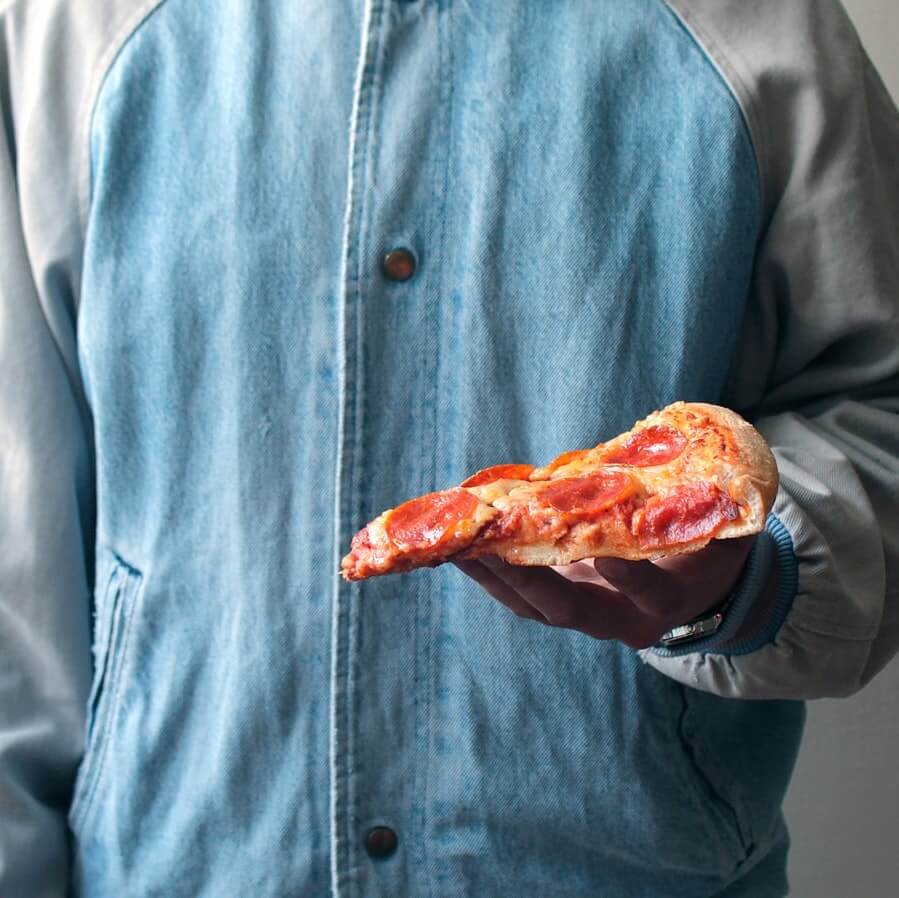 Calories and Fat in Vegan Meat

Burger King’s meat-free Impossible Whopper — which features a plant-based beef patty made by Impossible Foods — has a similar calorie count to a meat Whopper. The meat-free version has 630 calories, while the meat burger has 660.

The Impossible Whopper also has a similar amount of fat to a beef burger. Eating too much saturated or trans fat can raise your blood cholesterol, which can increase the risk of disease.

While Burger King’s meat-free and meat-based burgers boast similar counts of calories and fat, this is not the case for all plant-based products. British supermarket chain Iceland offers vegan “No Bull” quarter-pounder patties. They contain 9 grams of fat per 100 grams, 1.4 of which are saturated. In comparison, the supermarket chain’s beef patties contain 21.8 grams of fat, 9.8 of which are saturated.

Iceland’s vegan burger contains 190 calories per 100 grams. The beef version has 308 calories. Naturally, not all products are the same. The plant-based Beyond Burger has more fat and calories than the No Bull burger — 20 grams and 270 respectively. But this is still less than its animal-based counterpart. 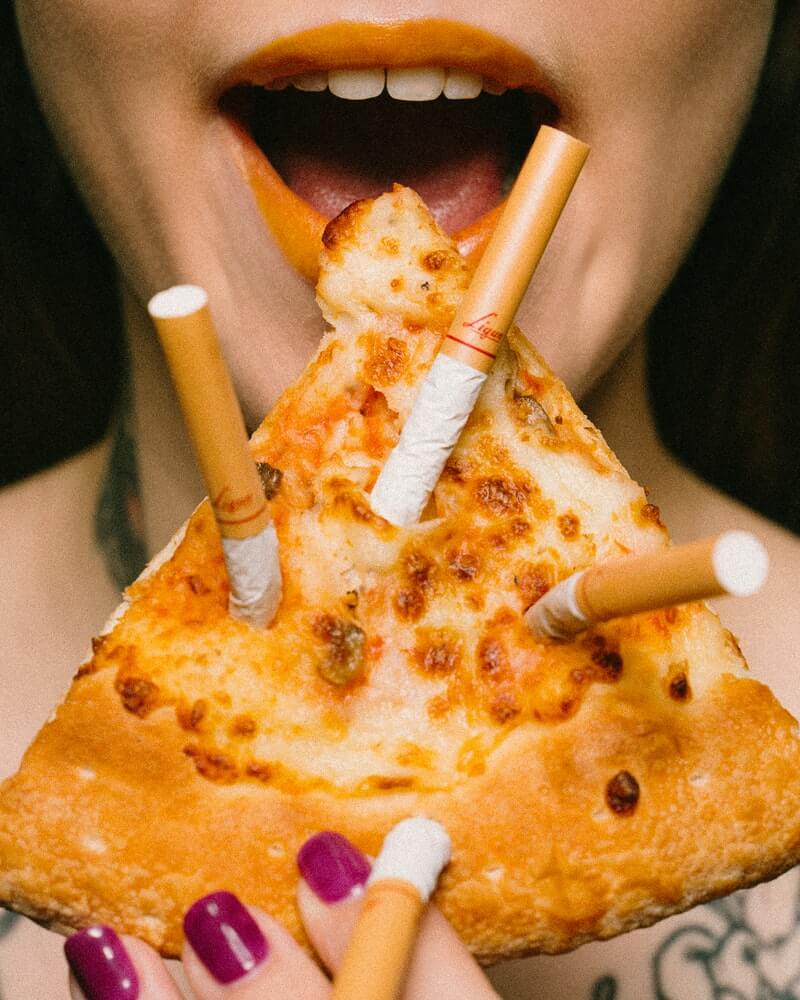 Processed meat is in the same WHO carcinogen category as smoking.

While some vegan meat products are high in salt, calories, or fat, they could still be safer than conventional meat. A growing bank of research is finding a connection between meat intake and diseases like cancer.

In 2015, the World Health Organization (WHO) named red meat — including beef, veal, and lamb — a Group 2 carcinogen, meaning it probably causes cancer in humans. Processed meat — like bacon, hot dogs, and pepperoni — was named a Group 1 carcinogen, meaning it does cause cancer. Asbestos and tobacco smoking are also in this category.

An Oxford University study published earlier this year found that eating just three rashers of bacon a day could increase the risk of bowel cancer by 20 percent. “This study shows the more meat you eat, the higher your risk of getting cancer and obviously the reverse is true – the less you eat the less likely you are to get bowel cancer,” Emma Shields, an information manager at Cancer Research UK, told the BBC.

A growing number of health experts are turning to plants for cancer prevention. The Henry Ford Wyandotte Hospital in Michigan offered a plant-based cooking class to teach people about which foods to go for to help prevent the disease.

A study published in the JAMA Internal Medicine studied the eating habits of 77,000 adults, finding that those who follow a plant-based diet could lower their chance of developing rectal cancer by 29 percent.

British charity Cancer Research UK advertises the benefits of a meat-free diet on its website. “Eating lots of processed and red meat can increase the risk of bowel cancer. If you’re eating lots, it’s a good idea to try and cut down,” Cancer Research UK writes online. When you cut down on meat, there’s more room on your plate for high-fibre foods like veg, wholegrains, and pulses like lentils and beans which are all high-fibre foods that reduce the risk of cancer.” 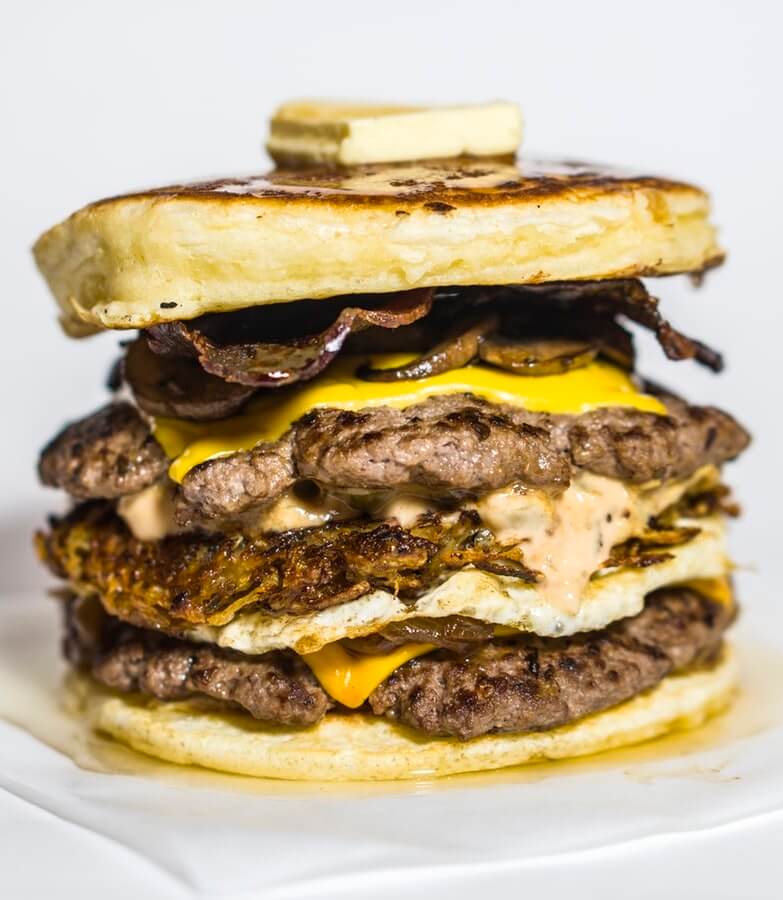 Red meat could raise your risk of heart disease.

A 2018 study conducted by Cleveland Clinic found that red meat could increase the risk of heart disease 1,000 percent more than plant-based foods. The body produces a chemical compound called trimethylamine N-oxide (TMAO) on a meat-heavy diet. It’s produced when gut bacteria digest choline, lecithin, and carnitine – compounds found in animal products like red meat and liver. TMAO in the gut can lead to cardiovascular disease, heart attacks, and strokes. Medical professionals look for high levels of TMAO in the blood to predict potential future heart problems.

Meat typically contains high levels of saturated and trans fats, which can raise blood cholesterol. Vegan foods, including plant-based meat, contain no dietary cholesterol; dietary cholesterol only exists in animal-based foods. “Veganism is the only truly cholesterol-free diet,” according to Medical News Today. High cholesterol can cause plaque to form inside artery walls. This ultimately raises the risk of stroke, peripheral artery disease, and heart disease.

Research published in the Journal of the American College of Cardiology found that eating plant-based could protect people against heart disease better than vitamin and mineral supplements. 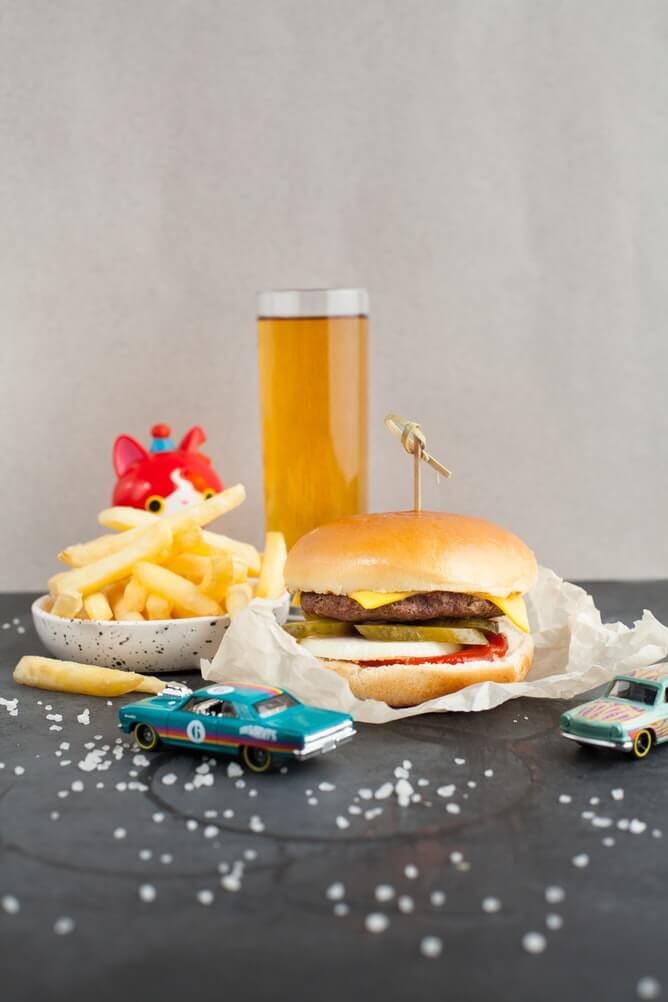 Eating too much animal protein could lead to health issues like diabetes.

Meat and Other Health Problems

Heart disease and cancer aren’t the only diseases linked to meat consumption. Ditching meat could help to manage, prevent, or even reverse diabetes. “By eating a healthy vegan diet low in cholesterol and saturated fat, but balanced enough to include fibre and protein, blood glucose levels can be made easier to control,” says the Global Diabetes Community.

A study of more than 2,000 young adults looked at how diet can influence diabetes. It found a 60 percent reduced riks in people who ate a predominantly plant-based diet over a 20-year period.

These findings are similar to those from a separate 2018 study. It found that the consumption of red and processed meat could increase the likelihood of developing type 2 diabetes. The research also found that eating meat could be a cause of non-alcoholic fatty liver disease.

Cutting out animal products could also reduce the risk of chronic disease, like arthritis and dementia. 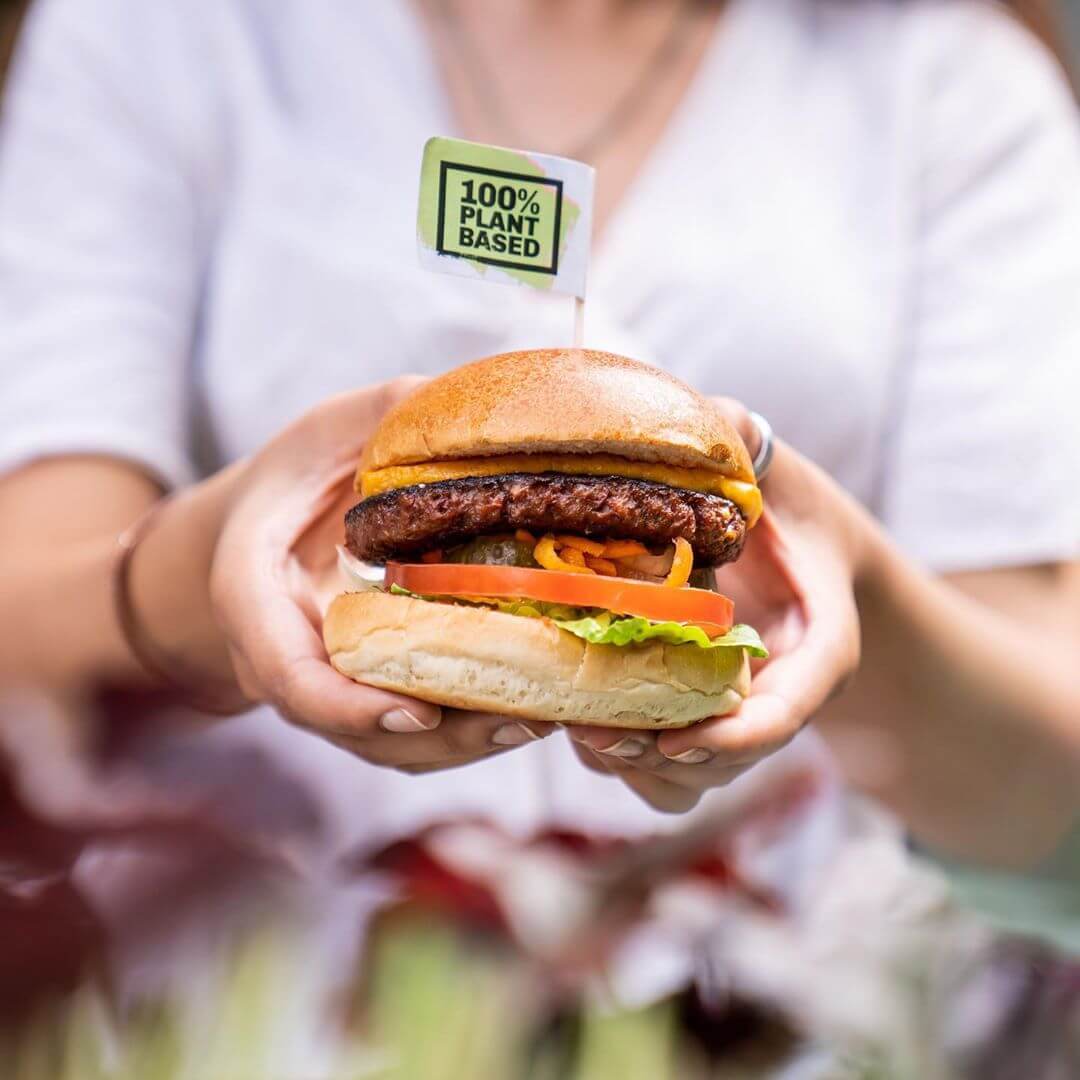 Vegan burgers could be a healthier choice than meat. | Moving Mountains

Vegan burgers, hot dogs, and bacon should be occasional treats. Focus instead on whole foods — beans, grains, and vegetables.

Meat-free fast-food is still fast-food. Neither vegan nor non-vegan fast-food options are overly good for you, and intake should be limited.

Processed plant-based meat isn’t the healthiest food out there, but it is a healthier alternative to animal meat. Vegan meat provides a way for people to enjoy the flavors they love while sidestepping some of the disease risks.

Dr. Mike Varshavski of Family Medicine told FOX Business that both vegan and non-vegan meat is an indulgence. “This is more of a risk reduction. If you’re eating three burgers a week and you want to reduce your animal intake, please have a meatless burger and reduce it,” he said. “But ideally, I want to just get people off of eating junk food. It’s whole foods that are going to get you healthy.” Whole foods are plant foods that are as unprocessed and unrefined as possible.

Senior public health nutritionist Clare Farrand, who led the George Institute for Global Health study, said to ABC, “We know that Australians are leaning towards eating more of a plant-based diet. This is ultimately a good thing. However, these are still packaged, processed foods.”

“There are some products which contain a lot less salt than others, so there are healthier options out there,” she noted. “When you’re eating a plant-based diet that’s full of whole foods, like fruits, vegetables, grains, nuts, legumes, this is obviously healthier.”