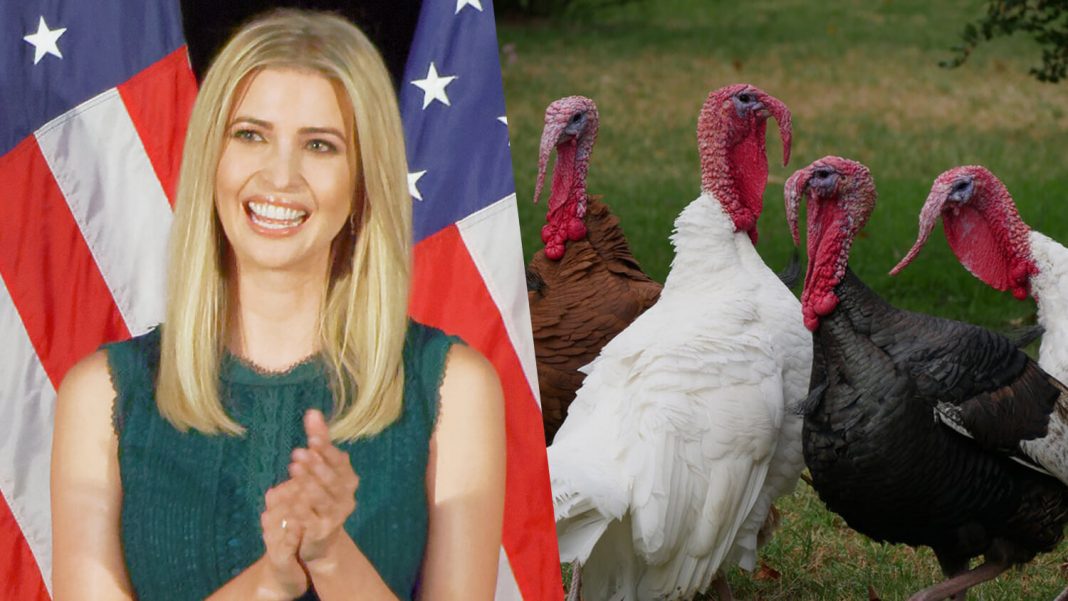 Ivanka Trump’s children, Joseph and Arabella, requested a vegetarian thanksgiving after watching the president – their grandfather – pardon the Thanksgiving turkeys this year.

Presidents and turkeys go way back, with reports of gifts of the animal being sent to the White House dating back to 1870. However, it was in 1989 – when George H.W. Bush was the American head of state – that the White Houses’ official turkey pardoning ceremony tradition was cemented.

According to White House History, after being presented with a turkey – wary of animal rights activists picketing nearby – Bush stated, “Let me assure you, and this fine tom turkey, that he will not end up on anyone’s dinner table, not this guy — he’s granted a Presidential pardon as of right now — and allow him to live out his days on a children’s farm not far from here.”

This year, it was the turn of turkeys Peas and Carrots to be pardoned by the President, and his grandchildren were quite taken with the pair. According to Trump, who posted pictures of Arabella, Joseph, and Theodore meeting the turkeys on her Instagram account, “After watching their Grandpa pardon Peas and Carrots at the White House on Tuesday, Joseph and Arabella have sworn off turkey and are insisting on a vegetarian Thanksgiving!”

After watching their Grandpa pardon “Peas” and “Carrots” at the White House on Tuesday, Joseph and Arabella have sworn off turkey and are insisting on a vegetarian Thanksgiving! Gobble, gobble. ?

The children are not alone in asking for a turkey-free holiday. A number of celebrities urged their fans to leave meat off the table this year, including star of “The Big Bang Theory” Kaley Cuoco.

In a video for the animal rescue organization Farm Sanctuary, the vegetarian actor said, “Each year 46 million turkeys are inhumanely raised and slaughtered for Thanksgiving. The majority of these birds are raised on factory farms, which are linked to numerous environmental problems hurting us and our planet.”

Filmmaker Kevin Smith – who turned vegan at the beginning of this year following a heart attack – also asked consumers to consider choosing a cruelty-free option over a turkey ahead of this years’ Thanksgiving. Speaking to two of the animals – again in a video for Farm Sanctuary – Smith, who appeared alongside his daughter Harley Quinn, said, “You have my solemn word ladies, I will never eat another turkey. And I will go out of my way to see that others might not as well.”