Brisport’s historic victory at the Democratic election primary for New York’s 25th district last July was followed by his unopposed election in November. He assumed office as a member of the New York State Senate on January 6, 2021.

Brisport is a public school teacher, vegan, and community activist. He is now officially the first openly gay, Black member of the State Senate. His identity and values have shaped his approach to politics, and Brisport told LIVEKINDLY that his campaign was based around “lifting up the voices of the most marginalized, the people most left behind, and the voiceless.”

“I really appreciate my identity and I’m really happy to make that historic leap for queer people, Black queer people, and queer people of color in general as a representative,” said Brisport.

Since taking office, he is now one of approximately 63 state senators in Albany drafting the laws that govern the state of New York. He says that he will continue to fight for bold universal programs such as housing, healthcare, and education for all.

His progressive platform also calls for an end to solitary confinement within the prison system, restrictions on facial recognition software, and the legalization of recreational marijuana.

Since the beginning of the coronavirus (COVID-19) pandemic, Brisport has specifically highlighted the role of widespread decarceration in mitigating the spread of the virus within the prison system. 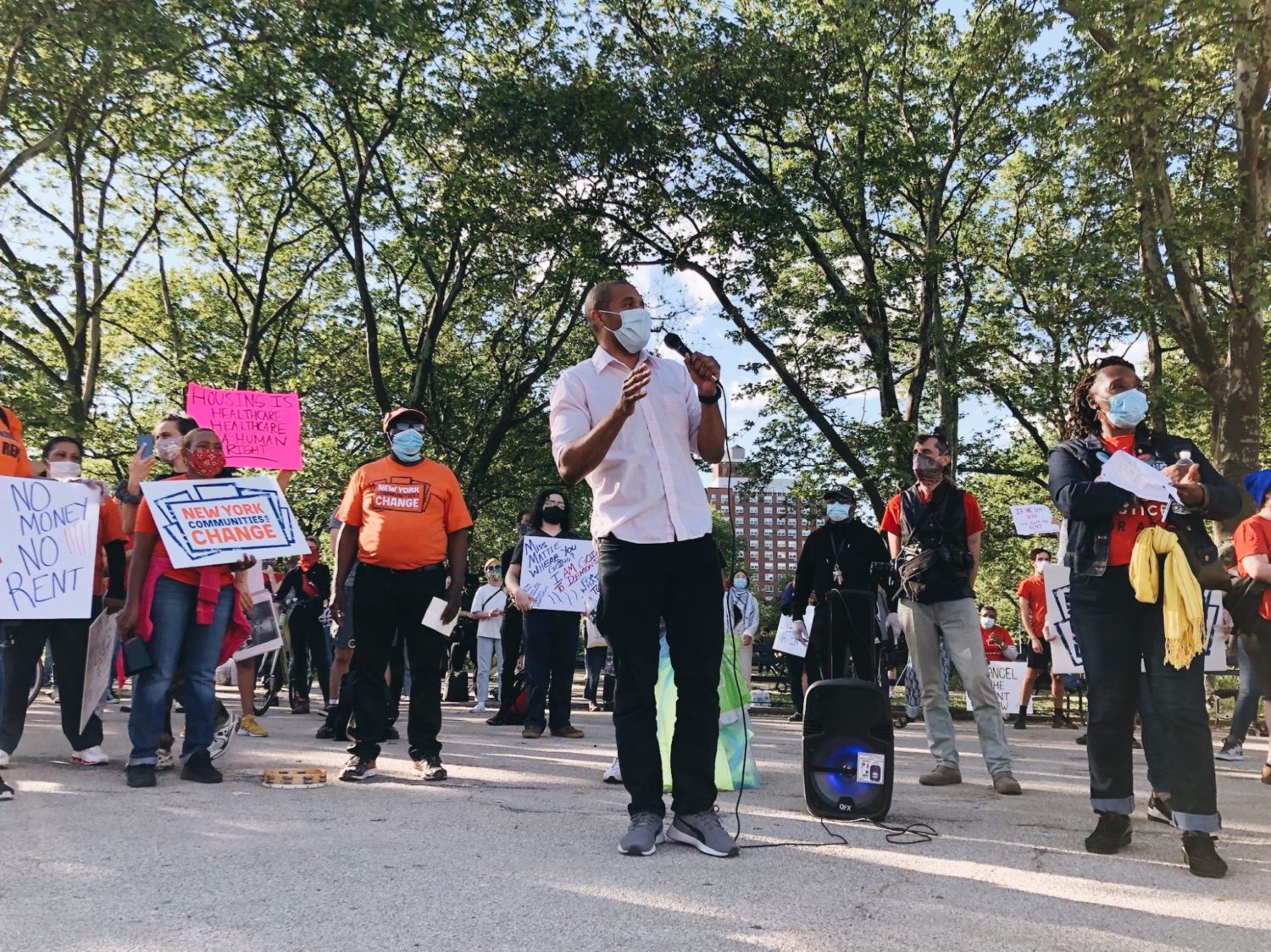 Throughout his campaign, Brisport has emphasized marginalized community members who have been systematically denied basic necessities and safety for so long; working-class New Yorkers, trans women, sex workers, and queer youth, in particular.

These issues are increasingly critical throughout the U.S. But particularly in New York, where many residents may not have access to secure housing, appropriate healthcare, or quality education. This was a key factor in Brisport’s decision to run for State Senate.

“I did a lot of work as an activist and then wanted to do something more,” explained Brisport. “Because I felt like the officials still weren’t listening and figured I would go into the seats of Albany itself.”

He has spoken several times about the need for an intersectional approach in both politics and activism. He emphasizes the links between different human rights struggles and animal rights issues and even draws on deeply personal experiences of both racism and homophobia.

A direct comparison between bigotry and animal oppression can be controversial, but Brisport instead highlights the necessity of compassion and education in fighting for justice in all areas.

“I was saying this at Black VegFest,” said Brisport. “When we allow people to inflict suffering on the voiceless, on animals, it opens the door for racists to come in and do the same thing to Black people.”

Talking about animal rights, he asked: “If not us, who? Who will advocate for the animals, who will speak out against inhumane treatment of nonhuman animals across the state and across the world?”

The intersection of various social justice struggles is at the center of Brisport’s politics. Whether through his community activism, lobbying, or the policy-making of the state senate.

Accessible Housing for All

There is an ongoing affordable housing crisis in New York. While rent is increasing, the average income is not. In response, Brisport aims to create a statewide minimum wage of $15. While also strengthening tenants’ rights and encouraging the development and maintenance of more affordable housing options.

“So many people, and especially queer youth, may not have access to housing. They might have gotten kicked out of their home, or just having trouble in other forums, and they don’t have access to stable housing,” said Brisport. “So that housing guarantee and healthcare for all are things that will disproportionately help queer people.”

As a community activist, Brisport has protested and campaigned around the lack of affordable housing in New York for years. In 2017, he was arrested for protesting a public meeting for luxury condominiums in Crown Heights, Brooklyn.

A neighboring district to Brisport’s Prospect Heights home, Crown Heights has been gentrified over the last ten years. This has increased the cost of living for its long term residents and displaced many working-class people of color. This cycle of gentrification and displacement is a common experience across the U.S. and around the world. But strengthening tenants’ rights, in particular, could help mitigate it.

Universal Healthcare Is a Human Right

According to Brisport’s platform, over one million New Yorkers are currently uninsured. The proposed New York Health Act (NYHA) would provide all residents with quality healthcare, and emphasize the importance of reproductive and maternal care. Inclusive, accessible healthcare is also of particular importance for LGBTQ New Yorkers.

“Many people in the queer community—especially those of color—may have compromised or underlying conditions and may not have access to healthcare,” explained Brisport.

In addition to lack of direct access, concerns about institutionalized homophobia, transphobia, and racism may prevent individuals from using healthcare services as they exist currently. Brisport has said that he will expand access to hormones and other gender-affirming healthcare, as well as PReP and other HIV treatments.

Brisport’s platform details a plan to create a single-payer system that would provide free access to essential, universal healthcare for all; “regardless of immigration status, zip code, race, gender, sexual orientation, or class.”

The Decriminalization of Sex Work

In New York, sex work is currently punishable by up to three months in jail and a fine of up to $500. Decriminalizing sex work would increase workers’ legal protection and access to healthcare, in addition to destigmatizing the profession as a whole.

The policing of sex work in New York disproportionately impacts trans women and women of color.

“There are some things that are really hot-button issues in the queer movement here in New York,” explained Brisport. “One is the decriminalization of sex work. Because when sex workers are often targeted or harassed by the police it is predominantly women and trans women of color.”

Brisport said that he specifically aims to repeal what is commonly known as the “walking-while-trans-ban,” an anti-loitering bill actively used by the police to harass trans women and women of color at night. “They are specifically targeted,” explained Brisport.

The Loitering for the Purpose of Prostitution law — first enacted in 1976 — is notoriously vague and allows police to stop and apprehend anyone they believe to be engaging in sex work, frequently with little or no evidence. Documented cases show that officers profile people based on their clothing and appearance, and frequently detain trans women.

Currently, punitive measures in schools disproportionately impact young people from disadvantaged and BAME backgrounds. By reducing punitive measures overall, and increasing training and education for staff, Brisport aims to disrupt what is commonly known as the school-to-prison-pipeline.

This theory suggests that the disproportionate incarceration of marginalized youth begins with their treatment in school, from detention to isolation to expulsion.

Brisport plans to redirect resources to the neediest schools, transition away from high stakes testing, and replace the police presence in schools with additional counselors and increased de-escalation and racial bias training.

This could improve pupils’ school experiences, and reduce the number of young people who end up in the prison system due to profile and institutionalized prejudice.

In New York, this includes “brownouts” — the reduction of energy flow to certain areas — and full blackouts, primarily occurring in working-class neighborhoods of color. Brisport’s platform cites the Green New Deal, which would build on existing legislation and move to a publicly owned and managed energy grid. This would improve access to energy locally, and reduce carbon emissions overall.

Banning factory farms falls under Brisport’s plans for both environmental and animal rights reform. Intensive animal agriculture produces greenhouse gases and consumes energy, land, and other resources. But as a vegan of eight years, Brisport also believes that “all living creatures are deserving of certain rights, dignity, and protection by the law.”

Brisport’s platform lists a proposed ban on the sale of new fur-based clothing and accessories and an end to dairy subsidies — while supporting farmers to transition away from animal products. These and a ban on the commercial sale of cats and dogs and compulsory humane education in schools are just some of his animal rights policies.

“I’m proud,” he continued. “We had a bold animal rights platform, I don’t know any other candidate […] doing things such as banning the sale of fur, transitioning dairy farmers out of the dairy industry, ending wildlife animal-killing contests.”

“The fur ban, it’s already been banned in California. And if we can get it banned in New York that’s two major states and two fashion capitals inside America. And that can cause a ripple effect throughout the entire country,” he said.

New York is currently the third-largest dairy producer in the U.S. So transitioning farmers into the plant-based sector would significantly impact the industry overall.

Brisport’s first involvement with animal rights was at a protest against Canada Goose in 2016. The iconic parka brand has been the target of lobbying groups, protests, and exposes for years due to its use of coyote fur trim and goose feather stuffing.

According to Brisport, he attended an animal rights conference in New York and ended up protesting the opening of Canada Goose’s flagship store in Soho, Manhattan. “It was so invigorating,” said Brisport in an interview with Their Turn. “It really awoke me to the further steps I could take to protect animals.”

‘I Don’t Believe in Causing Suffering’

Brisport aims to cut out “cruel farming practices” such as the unanesthetized castration of pigs and debeaking of hens. He also proposes a ban on battery cages for chickens, veal crates for calves, and gestation crates for pigs.

The vegan politician has suggested a ban on live animal markets — something that has received unprecedented support in the wake of the COVID-19 coronavirus pandemic. Some sources indicate the virus may have originated in the wild animal meat trade. According to Brisport, a ban on live markets would set a precedent for other animal rights issues, too.

“Once you take off the veil from live animal markets, you can start to take the veil off slaughterhouses, industrial animal agriculture, or factory farms. One thing can lead to another,” he said.

“I don’t believe in causing suffering to anyone who can suffer,” he continued. “Whether they are a human or an animal, suffering hurts. I know what it feels like to suffer and I don’t want to inflict that on anyone else.”

Brisport’s continuing work for animals is the natural conclusion of his first switch to vegetarianism. According to Brisport, he first went vegan purely as a personal choice; to “not eat animals” as his contribution to ending suffering. But as he learned more about animal activism and veganism in general, he said he realized “veganism has to be a political choice.”

“It’s not enough to just remove my own dinner plate from the equation,” added Brisport. “I have to address the system that is causing suffering to billions of animals every year.”