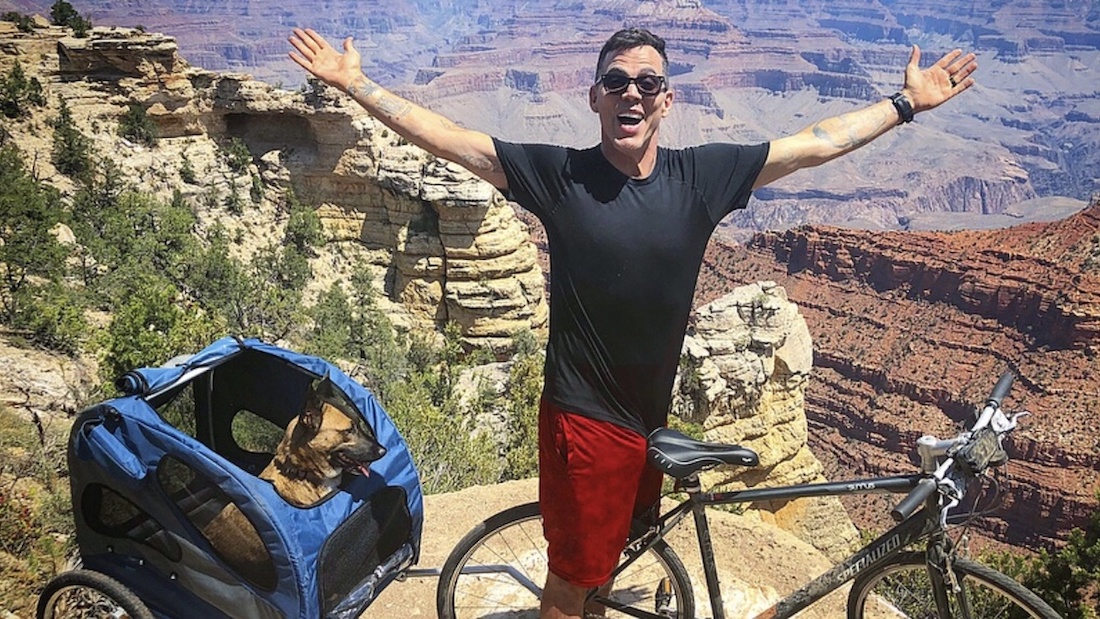 For a man brought to fame by his dangerous stunts in the hit MTV series “Jackass,” there is no physical challenge too daunting. Now, fuelled by a plant-based diet, Steve-O is training for a triathlon.

The vegan celebrity posted a selfie with his partner Lux Wright on Instagram this week, sharing the news. “Why did @luxalot and I just go running?” he wrote. “Because I’m training for a muthaf*ckin TRIATHLON!!!”

Alluding to his physically enduring past, and noting his revived energy on a vegan diet, he hashtagged, “#OldDogNewTricks” and “#FountainOfYouth.”

Vegan since 2013, the celebrity is the fittest and healthiest he has ever been. In June, he told his Instagram followers, “For my birthday this year, I decided to get in the best shape I’ve ever been in.” He teamed up with Rich Roll, a vegan ultra-endurance athlete, to help him get in shape. In an Instagram post, Roll shared a photo of himself with Steve-O out in the Malibu mountains, taking a break from their trail ride. Roll captioned, “He said he’s trying to get into the best shape of his life so I gave him a tour of the neighborhood.”

The vegan celeb has also attributed his youthful appearance to a plant-based diet. Posting on his Twitter account recently, he showed side-by-side images of his face – one taken in 2012 at age 38 and another taken this year. He captioned the post, “six years older, but still healthy as f*ck!”

Steve-O is not vegan solely for the fitness or anti-aging benefits, though. He is also an animal welfare advocate who has been arrested for his campaigning. In 2014, he executed his well-known “SeaWorld Sucks” stunt, earning himself a charge for a traffic infraction. Undeterred, the very next year, another SeaWorld protest led to Steve-O’s arrest. However, passionate about the cause, the comedian had no regrets: he claimed it was worth it to raise awareness for the captive marine mammals forced to perform at the park. Last January, the animal lover also adopted Wendy, a stray dog he encountered in Peru while filming.