(Updated February 5, 2020) | Musician and entrepreneur Jaden Smith’s I Love You Restaurant participated 6th Annual Skid Row Carnival of Love. The carnival took place in Los Angeles’s Skid Row, a neighborhood that has one of the highest homeless populations in the United States.

“Big Thank You to all our partners and volunteers for coming together for a day of giving at the Skid Row Carnival of Love, our first I LOVE YOU Activation of the Decade,” I Love You Restaurant wrote on Instagram.

The event was organized by the Wayfarer Foundation, a nonprofit that transforms community responses to homelessness, with vegan meals provided by I Love You Restaurant with support from Impossible Foods and boxed water from JUST Water, as well as new sneakers with support from New Balance and new clothing from MSFTSRep. 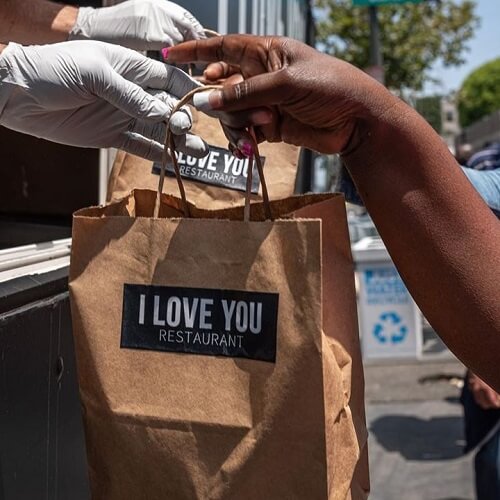 The first I Love You Restaurant event of 2020 took place over the weekend.

I Love You Food Truck

The initiative offers healthy food to those in need. Smith and his team hand out free vegan bowls made with dark leafy greens, sweet potato, black beans, and grains.

Together with rapper A$AP Rocky, Smith took the initiative to Drew Hamilton Houses in Harlem, New York last September. They handed out more than 500 meals to people in the community, boxes of JUST Water, and 500 MetroCards.

Smith said in a statement, “I’m so honored to have the I Love You truck all the way across the country in Harlem with the help of my brother A$AP Rocky and the whole AWGE TEAM. We love you Harlem.”

Last October, I Love You Restaurant partnered with the eatery to launch the I LOVE YOU Bowl. The bowl was developed by Tabitha George, the Smith family’s executive chef, based on a bowl she created for the Smiths. 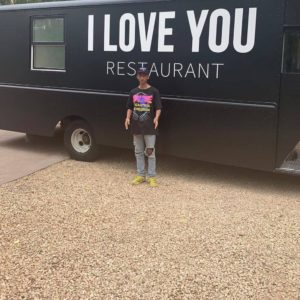 The organization works across the U.S. It advocates for kindness, acceptance, empathy, and respect, “regardless of age, race, gender, sexual orientation, language, religion, ability, ethnicity, class, circumstance, environment, level of addiction, or species.”

Since it started in 2014, it has supplied more than 38,000 vegan meals in 10 chapters across the country. Among other services, it also holds workshops, clothing drives, and offers mentorship to adults and children. It also provides vegan dog food if needed.

“Chillis on Wheels believes that an empowered community is key in dismantling systematic inequalities that prevent veganism from being attainable by poor and low-income communities,” the organization notes. “Through our networks of support, we’re collectively building alternate systems to make veganism accessible to the areas that we serve.”

Like Chillis on Wheels, Smith has a track record of doing good for others.

Last March, Smith’s JUST Water partnered with a local church in Flint, Michigan to aid in the water crisis that has been ongoing since April 2014, when the city’s water source was switched from the Detroit River to the Flint River. JUST Water donated a mobile treatment system called the “Water Box,” which filters out contaminants such as lead.

“This has been one of the most rewarding and educational experiences for me personally,” Smith said in a statement. “Working together with people in the community experiencing the problems and design(ing) something to help them has been a journey I will never forget. We are planning to deploy more water boxes in Flint and other communities facing similar challenges.”

Prior to that, Smith had donated more than 10,000 cartons of JUST Water to local schools.

Smith isn’t just on a mission to provide food and water, he also likes to give back with clothing. He launched a pop-up—called “ERYS PRESENTS: EVERYTHING BAD FOR YOU”—inside Selfridges’ Designer Street Room last September. The pop-up sold merch for his latest album ERYS—which includes vintage t-shirts printed with the ERYS logo. It also sold pieces from his MSFTS Trippy Summer collection.

Customers were encouraged to donate old items of clothing when they purchased new items. For those attending the launch at Selfridges’ skate bowl, Smith requested ticket-holders bring an item of clothing to donate to UK youth homelessness charity Centrepoint.

[February 5, 2020 editor’s note: This article was updated to reflect that the Wayfarer Foundation organized the event.]