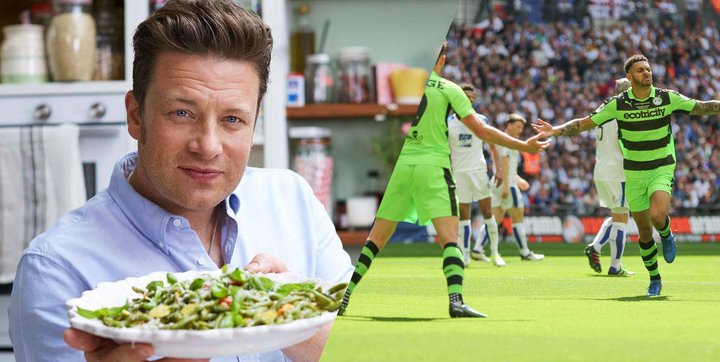 Oliver, along with farmer and television presenter Jimmy Doherty, met the team at their home stadium – The New Lawn – for the filming of their Channel 4 cookery programme “Friday Night Feast.”

Oliver and Doherty prepared multiple plant-powered dishes, including a Sri Lankan curry with roasted cauliflower, for the League Two team. Speaking about the experience, midfielder Dayle Grubb revealed that the celebrity chefs were excited about the team’s vegan focus.

“They both seemed really impressed with the way club is run as a vegan football club and how some of the players have made the transition themselves,” Grubb said to The Sun. “They were really interested in the impact it had on us as players and also the fans. Even down to the organic pitch we have, they were surprised with the level to which Dale has taken it,” he added, referring to the chairman of Forest Green, Dale Vince.

How was your Christmas? We got… Three points ✅ Four goals ✅ A hat-trick for @george_willo35 ✅ Two points off the automatic promotion places in @SkyBetLeagueTwo ✅ And we all know what’s next up on Saturday… We hope you enjoyed that late present FGR fans!

“I wouldn’t be a vegetarian right now if I hadn’t made the move to Forest Green. By eating the food at the ground and at training, you become more knowledgeable with the food you can eat and it is eye-opening,” he explained.

“When you eat meat, you think it has to be in every meal, but it isn’t until you are shown alternatives that you realise there are a lot of different options for you,” he said, also adding that the plant-based food Oliver cooked was “unbelievable.”

The midfielder said he hopes the “Friday Night Feast” segment “comes across well and opens the club up to a new audience.”

The episode will air this Friday.