The popular jam biscuits were suitable for vegans once before. Owner Burton’s Biscuits added milk protein to the recipe in 2016.

Now, following another recipe reformulation, the milk has been removed. The packaging has also had a makeover; it’s darker and features the slogan “No Nasty Stuff! We’re Jammie Enough.” The new version of Jammie Dodger Minis is also now dairy-free.

In a statement, Kate Needham, Burton’s Biscuit’s marketing director, said: “We have listened to our biscuit fans. [We] are pleased to announce that we’ve moved once again to a dairy-free recipe.”

She added: “family fun is at the Jammie heart of our brand, so it’s important to us that the whole family—and families of all lifestyles—can share a pack. Thanks to the new recipe, we’re happy that will now be more possible.”

According to Needham, there’s more on the way from the brand too.

“With our household classic seeing a surge in popularity, you can expect to see lots more fun and mischief coming from the UK’s favorite Jammie biscuit brand going forwards,” she said. “It’s an exciting time to be a Jammie Dodger fan.” 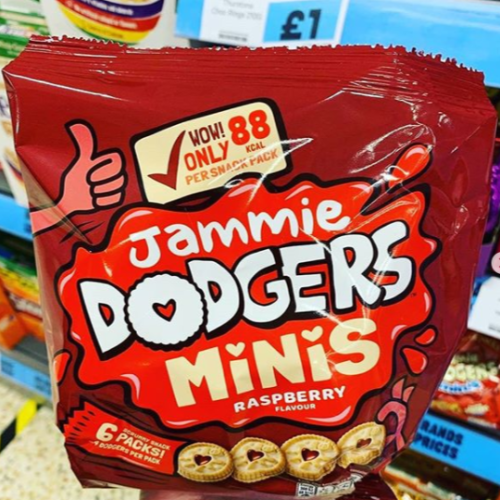 The new vegan Jammie Dodgers have already been spotted in stores. | @productsinstore

‘You Can’t Avoid the Vegan Buzz in the UK’

Burton’s Biscuits is not the only company listening to vegan demand. Last year, Galaxy launched a range of vegan milk chocolate bars in three flavors.

Kerry Cavanaugh—the unit director of Mars, which manufactures Galaxy bars—said in a statement at the time: “wherever you look, you can’t avoid the vegan buzz in the UK.”

Earlier this year, Mondelēz, the owners of Cadbury, confirmed a vegan version of the iconic Dairy Milk bar was in the works. A spokesperson said: “we’re always listening to our consumers, so we can develop and provide people with greater choice. This includes looking at a plant-based Cadbury Dairy Milk bar.”

The new vegan-friendly Jammie Dodgers will officially be available in stores across the UK from July 13. Some shoppers have already spotted packets in-store now.