Sixty-year-old Japanese tofu company Sagamiya Food, a leader in the industry, has developed a unique method of making fermented vegan cheese. Called Beyond Tofu, the “miracle protein” has an authentic, cheesy flavor and can be melted or grated – the company is no relation to the California-based vegan protein brand, Beyond Meat

The Gunman prefecture-based tofu company announced the innovative vegan cheese one year ago.

According to Sagamiya Food, it is made by fermenting low-fat soy milk. Last August, it launched another product called Beyond Pizza, consisting of fried tofu topped with tomato and Beyond Tofu cheese. 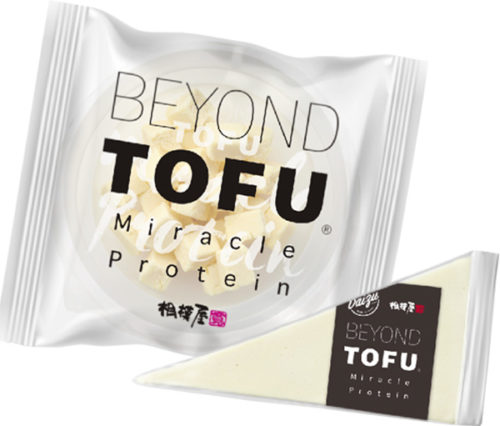 “A lot of vegan cheeses aren’t made with a fermentation process so sometimes they lack the similar flavour and texture of traditional cheeses, but the Beyond Tofu products have a great creamy, cheesy, melt-able, grate-able texture,” wrote Bare Vegan, a plant-based blogger based in Japan.

“The Beyond Pizza was interesting. It’s actually a piece of fried tofu topped with the Beyond cheese so it’s an entirely soy pizza! It was pretty good once we topped it with some grilled cherry tomatoes. Not sure if I’d call it a pizza though,” he added.

Many of the most popular vegan cheese brands, like Daiya, are not fermented. But according to celebrity chef Matthew Kenney, the process allows the dairy-free cheese to develop a funkier, more authentic flavor.

It’s a process in his 2014 cookbook, “Plant Food,” where he mixes probiotics with cashew or macadamia nuts and allows it sit for one day.

“After 24 hours, it starts to get that sour, fermented aroma and once it has, then you can open the cheese and the inside will have air pockets that are a little sponge-y,” he explained in an interview with LA Weekly. “At that point, you can mold it and flavor it. For example, we’ll add truffle and salt to that cheese and we’ll mold it into a ring mold and let it sit for at least 48 hours.”

It can be fermented in as little as two days, but chef Kenney has aged vegan cheese for six months. Chef Jules Aron, author of the vegan cheese cookbook “Vegan Cheese: Simple, Delicious Plant-Based Recipes,” is also a proponent of the fermentation method.

According to Sagamiya Food, its Beyond Tofu vegan cheese and Beyond Pizza are available at major Japanese grocery store chains, Maruetsu and Daiei, as well as in the Kanto and Kansai regions.