Azuki beans, also known as adzuki beans, are small, red beans that are cultivated and used in desserts throughout East Asia. In Japan, the beans are sometimes cooked with sugar to make anko, a sweet red bean paste used in wagashi, or traditional Japanese sweets. It’s also popular in dairy-free ice cream, especially bars made using the beans.

One of the most popular varieties of azuki bean bars comes from a company called Imuraya Confectionary, which, as reported by Japan news site SoraNews24, recently began offering luxury azuki bean bars. Toppings include yuzu, matcha and chestnuts, matcha and beans, and strawberry.

The bars can be found at the Imuraya Waryokado store in the Isetan Department store in Kyoto.

Luxury azuki bean bars aren’t the only vegan treat that can be found in Japan. According to Favy Japan, dairy-free soft serve ice cream made from yuba (tofu skin), a byproduct of the soy milk-making process, is available in Tochigi and Kyoto. It’s said to have a rich, creamy flavor like thick soy milk.

Beyond frozen desserts, there are several vegan and dairy-free wagashi to be found throughout Japanese supermarkets, food stands, and convenience stores. Azuki beans are also used to make wagashi like mizu yokan, a sweet red bean cake with chestnuts. Many jelly-like desserts (kanten) in Japan are actually vegan-friendly because of the use of agar, rather than gelatin. It’s the famous ingredient behind the mizu shingen mochi, best known as the raindrop cake. 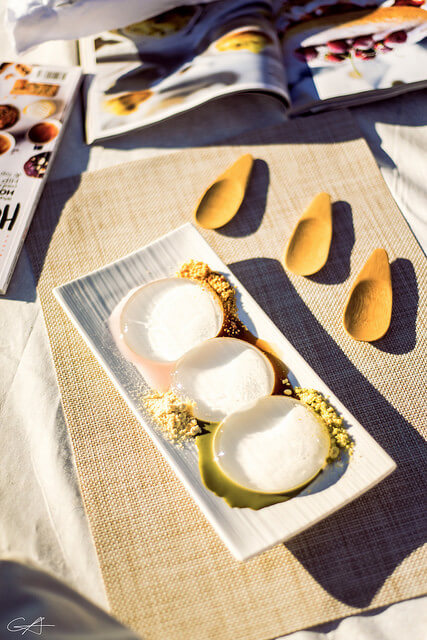 Anko, red bean paste is also used as a stuffing for various traditional types of mochi (sweet, chewy rice cakes), daifuku (mochi stuffed with strawberry and red bean paste), and as a topping on shaved ice. It is sometimes used as a topping for dango, a mochi-adjacent sweet served on a skewer with toppings including sweet soy sauce, kinako (toasted soy flour), or sweet chestnut paste.

Of course, there’s vegan Japanese food to be found beyond dessert. For tips on traveling Tokyo as a vegan, see here.