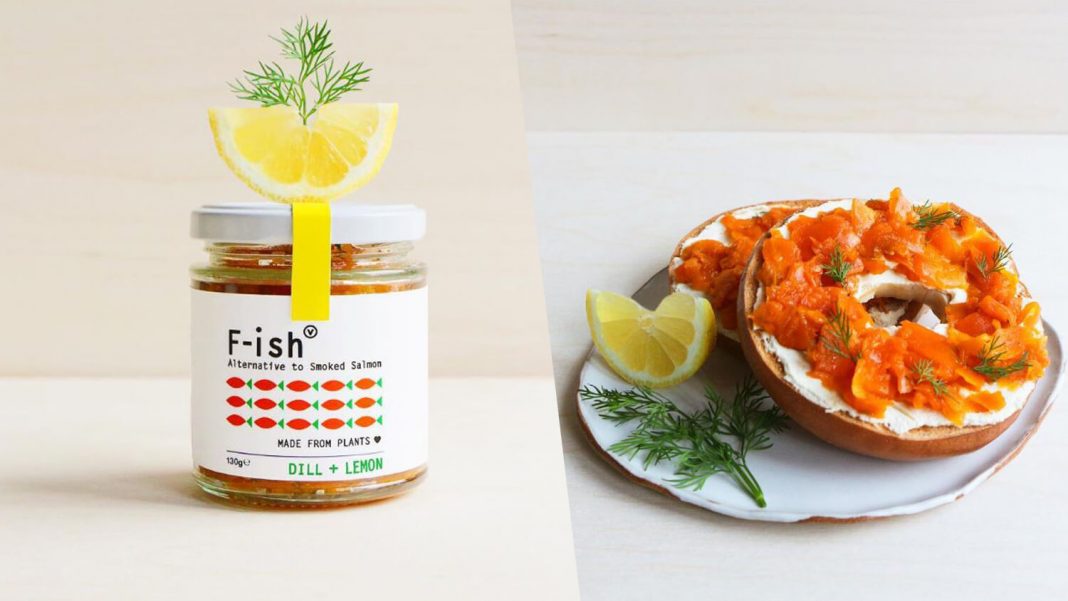 The UK is adding to its roster of vegan fish options with the launch last month of F-ish, a plant-based alternative to smoked salmon.

F-ish’s creator, who just goes by Moko, says the idea for the brand is rooted in her childhood.

“When I was younger, I lived in Japan and ate a lot of seafood,” Moko told Metro.co.uk. “I absolutely loved the flavour and texture it brought to my plate. However, as a vegan and environmentalist, I made a decision to end my contribution to the mass-farming of fish.”

Moko, who also runs a vegan event space where she organizes dairy-free cheese and vegan wine parties, started serving the vegan fish at the events. It became a runaway hit.

“I wanted to create alternatives for people like me, whilst also bringing awareness to issues of marine cruelty, overfishing, and aquatic ecosystem destruction,” she says.

F-ish is made with carrots, that when smoked and seasoned, take on the flavor and texture of smoked salmon. It’s a trend catching on in restaurants across the globe, but Moko is the first to bottle it.

So, we did our first ever market on Sunday and it was so lovely! Just wanted to say massive thanks to those who popped down and showed us support, and those who made the trip specially to get a jar of @f_ish_notfish after finding out about us on social! ?? Each one of you mean a lot to us ? We’ll be announcing more market dates soon so keep your eye out if you missed us on Sunday, big love✌️? Also if you can’t wait till then, we dropped off some more jars at @loveshack_ldn so pop in there ? . . . . . #vegan#veganfish#veganseafood#sustainableliving #veganlondon#vegansofldn#londonvegan#veganfood#veganproduct#artisanproduct#madeinlondon#market#marketstall#veganmarket#londonveganmarket#foodmarket#londonfood#timeout#londonvegancommunity#whatveganseat

Moko is currently selling the vegan F-ish salmon at the Hackney Market but grocery stores and small stockists are expected to start carrying the product soon. She says Whole Foods will also start selling F-ish.

“It’s great because it allows people to experience the nostalgia and pleasure of a similar taste and texture, but in a more sustainable way without compromising their values,” Moko says. “It’s also useful for those with allergies or pregnant women not wishing to risk ingesting pollutants.”

The UK is seeing vegan fish pop up in traditional fish and chip shops as well. The popular chain Sutton and Sons recently launched a fully vegan location as demand for plant-based seafood continues to increase.

The U.S. based brand Loma Linda is bringing its vegan canned Tuno to UK shelves in early 2019. Good Catch Foods is set to launch its vegan tuna and crab products in early 2019 as well. The brand, developed by the vegan chef brothers Derek and Chad Sarno of Wicked Healthy, uses a blend of beans and seaweed to make its vegan fish.

While demand for vegan seafood continues to rise, that’s not the case for traditional seafood. In a recent interview, the vice president of marketing for Starkist lamented that Millennials have led to the recent decline in canned tuna sales. “A lot of millennials don’t even own can openers,” he said.