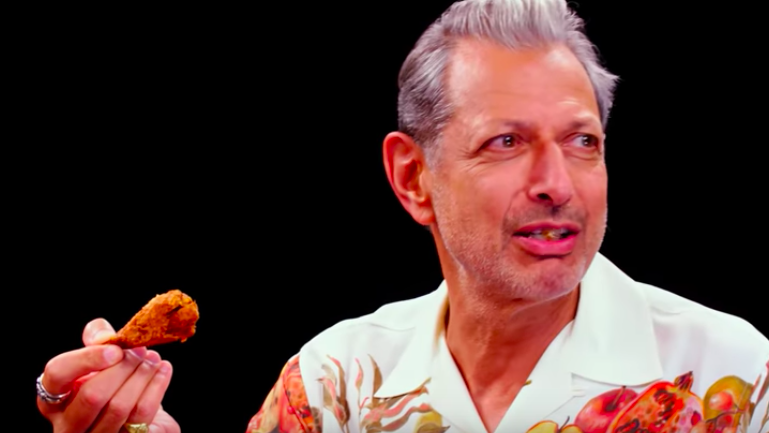 You can call him Jeff, or Mr. Goldblum, but if you’re eating vegan hot wings with actor Jeff Goldblum, you should probably call him “Daddy.”

That’s according to a recent episode of the popular web series “Hot Ones,” where celebrity guests are interviewed while eating spicy, and in Goldblum’s case, vegan hot wings. Goldblum appeared in the season finale of the First We Feast series.

While munching on tofu and tempeh vegan wings, the “Hot Ones” host Sean Evans asked Goldblum about some recent fan comments on his Instagram and the fact that a number of his followers refer to him as “daddy.”

“Zaddy” is a term that usually refers to a daddy easy on the eyes, and the “Jurassic Park” star was all about it.

Goldblum, now 65, was called the “world’s youngest 63-year-old” by GQ several years ago and it appears to hold true even today. The actor says his secret to staying young is partly in not focusing on trying to be young. And while much of it may be genetic and lifestyle in avoiding the trappings of aging, his aloof quirkiness appears to also keep him mysterious — to his audience at least — which can also create an air of youthful unpredictability.

Credit may also go to having a young family — his wife Emilie Livingston, is about 30 years his junior, and they have a young son, Charlie Ocean who keeps Goldblum on his toes.

“I find that having a kid makes you feel younger. Whereas otherwise you might be sitting around at any given moment, now you’re not. You gotta get up and walk him around,” Goldblum said.

He’s been known to indulge in green juices, too. The actor also says he generally avoids alcohol and tobacco as well as steers clear of fried foods, excess sugar, and fat. And it seems that even though vegan wings are likely fried and slathered in spicy, salty, and fat-laden sauce, they’re certainly much healthier options than the animal-based chicken wings loaded with saturated fat.

“I think when nature changes your face — especially if you live a clean life,” Goldblum said in 2016, “your body is designed so it all looks right together.”

Earlier this year vegan actress Natalie Portman also feasted on vegan wings for the show while discussing the documentary she recently narrated, “Eating Animals,” based on Jonathan Safran Foer’s 2009 book of the same name.