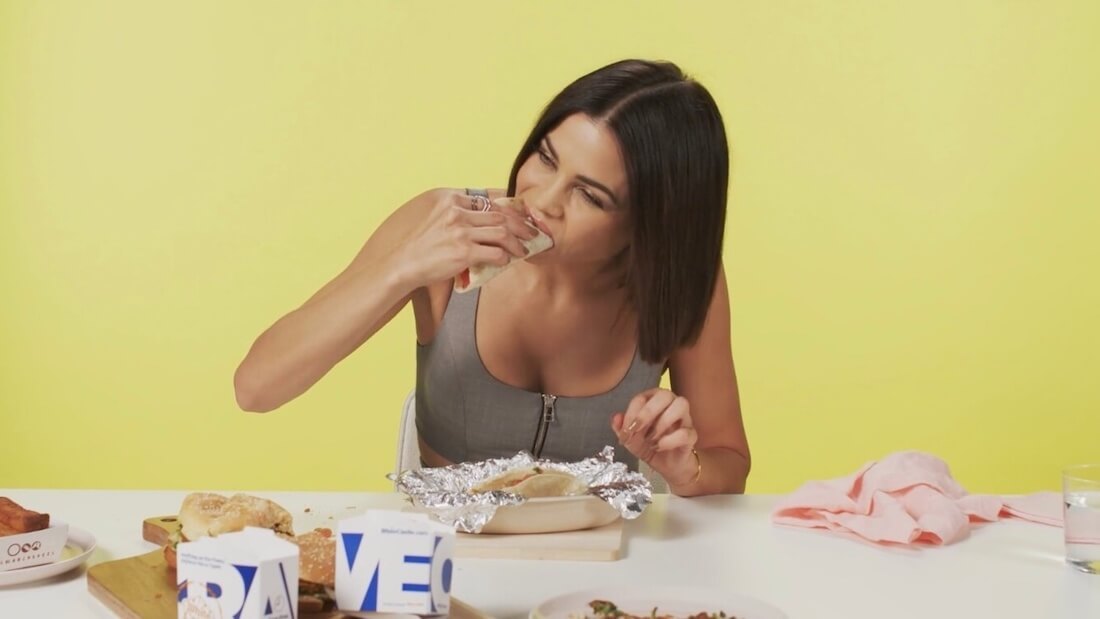 Dewan is perfect for the role; she became a vegetarian when she was eleven and went vegan in 2013, which was ahead of the vegan boom. She knows good vegan food; she’s been eating it for decades. And despite the fact that she maintains an ultra-fit dancer’s body, she’s not against the occasional indulgence. In an interview last year with the Peaceful Dumpling blog, she said, “When I cheat, it’s chips and salsa—I generally don’t want to cheat with animals. I want to cheat with French fries.” That being said, she was eager to put these fast-food options to the test.

First up – Carl’s Jr. Famous Star Burger with Fried Zucchini instead of meat. After just one bite, Dewan confessed, “I didn’t know this existed. This just changed my life.” She was less enthused by the Denny’s veggie burger, but she did acknowledge the company for providing a decent vegan option. Next in the burger round was White Castle. The actress sampled two sliders – one Impossible Burger slider without cheese, and the other the White Castle original veggie slider. As a long time vegan, she preferred the veggie slider, but noted, “If you’re a meat eater that’s scared about going vegan than this is the one for you.”

Moving on to pizza, the dancer was pleasantly surprised to find that vegan options are available at U.S. Domino’s. Following a few bites of the Thin Crust Pacific Veggie Pizza (with no cheese), she exclaimed, “This is great to know. There is a healthy really yummy option. This is delicious!”

Up next, Chipotle’s Sofritas Soft Tacos. As a self-proclaimed Mexican food lover who eats it “once or twice a day,” she was completely taken with these tacos.

The final item came from Burger King. Dewan dipped the (accidentally vegan) French Toast Stick into the syrup, took one bite, and was absolutely floored. “Oh my goodness. This is vegan? Are you guys messing with me is this like the one non-vegan thing?” she asked the crew. When the producer confirmed that it was vegan, she proclaimed Burger King the winner. “Breakfast lunch and dinner right here,” she joked.