Could Jesus be vegan? He might be in the upcoming film “Mary Magdalene,” in which he is portrayed by vegan actor Joaquin Phoenix.

Phoenix appears in the film alongside fellow vegan actor and Phoenix’s partner, Rooney Mara, who plays Mary Magdalene, a Jewish woman who traveled with Jesus as one of his followers. The biblical drama’s plot centers around Magdalene, telling Jesus Christ’s story from her point of view.

The film’s roots lie in compassion, love, and kindness, according to its director Garth Davis, whose directorial debut “Lion” earned a Best Picture nomination at the 2016 Oscars. They’re themes that both Mara and Phoenix practice in their off-screen lives. 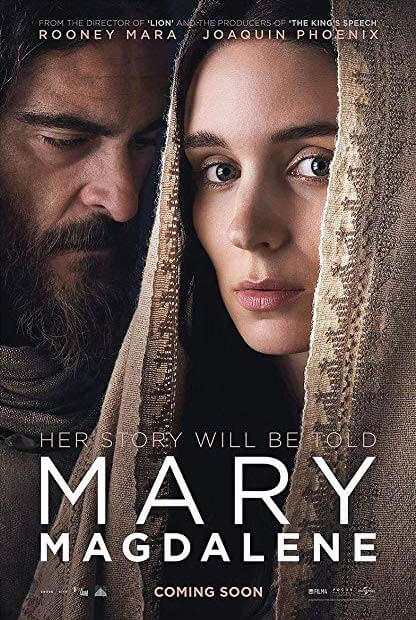 Both Mara and Phoenix are influential members of the plant-based, cruelty-free movement. The couple appear in vegan film “Dominion,” a 2018 Australian documentary that investigates the “dark side” of animal agriculture and explores the morality of humankind’s treatment of the animal kingdom.

Mara, who has received Academy Award nominations for her work in the 2015 drama “Carol” and 2011’s “The Girl With the Dragon Tattoo,” went vegan around eight years ago.

Along with her business partner Sara Schloat, Mara launched a vegan fashion line called Hiraeth in February 2018. The brand was born out of a desire to connect shoppers with the items they’re buying.

“With clothing, [no one knows] who made their clothes, or where were they made, or what they’re made out of. People are not at all aware of those things,” she told Vogue. She explained that even when she bought products that were “cruelty-free in the animal sense,” she “didn’t necessarily know where those things were made, or if they were cruel toward humans.”

Phoenix, who stars in the upcoming “Joker” film, has also been making waves in the fashion world. He appeared on an anti-wool billboard that coincided with New York’s Fashion Week: Men’s. For the ad, Phoenix posed in a vegan wool suit beside some sheep and font that reads: “Cruelty Doesn’t Suit Me. Wool hurts. Wear Vegan.”

Phoenix has adhered to a plant-based diet for around 40 years. One of his first forays into media activism took place around twenty to thirty years ago, when the actor appeared in a PETA ad that encouraged people to save turkeys on Thanksgiving by choosing plant-based food.