For Joanne Molinaro, a Chicago-based lawyer, long-distance runner, recipe developer, and founder of the blog The Korean Vegan, Christmas is a big deal. Last year, she welcomed 17 family members into her home (half were from her side, and half from her husband’s). She presented them with an entirely vegan spread, filled with both traditional Korean dishes and Western sweet treats like Snickerdoodles and chocolate chip cookies. “We had such a good time,” she tells LIVEKINDLY over Google Meet, as she sits cross-legged on her bed in sweats. “[We] played games, opened presents, ate cookies, all that stuff.”

Molinaro’s blog The Korean Vegan is four years old. In the past three months, her Instagram follower count has more than doubled, from 75,000 to more than 200,000. On TikTok, she has surpassed 1 million. She’s a talented recipe developer (the proof is in the demand: her Thanksgiving morning virtual cooking class sold out within a few hours). But it’s Molinaro’s passion for her lifestyle, connection to her culture, storytelling through candid blog posts (like her moving account of Election Day in the U.S.), and relatable personality that have cemented her as a social media star.

Through the blog and her social media channels, she has shared not just her cooking skills, but also her heart — and it has made a big impact. She is humble about her success: “I think what people really enjoy is just listening to me talk while I make the food,” she says.

This year, as with most of us, Molinaro’s holiday scene will look different, with just her mother-in-law and brother in attendance. But the food will again be entirely vegan. It was the same for Thanksgiving. Hosting the holidays without animal products is something she refuses to budge on, despite past attempts at persuasion from family members.

“[Last year some of my family] were like, we can come over to your house, but can we bring non-vegan food?,” she recalls. “I was like, no. This is my house. I’m not going to have animal products on my table.” 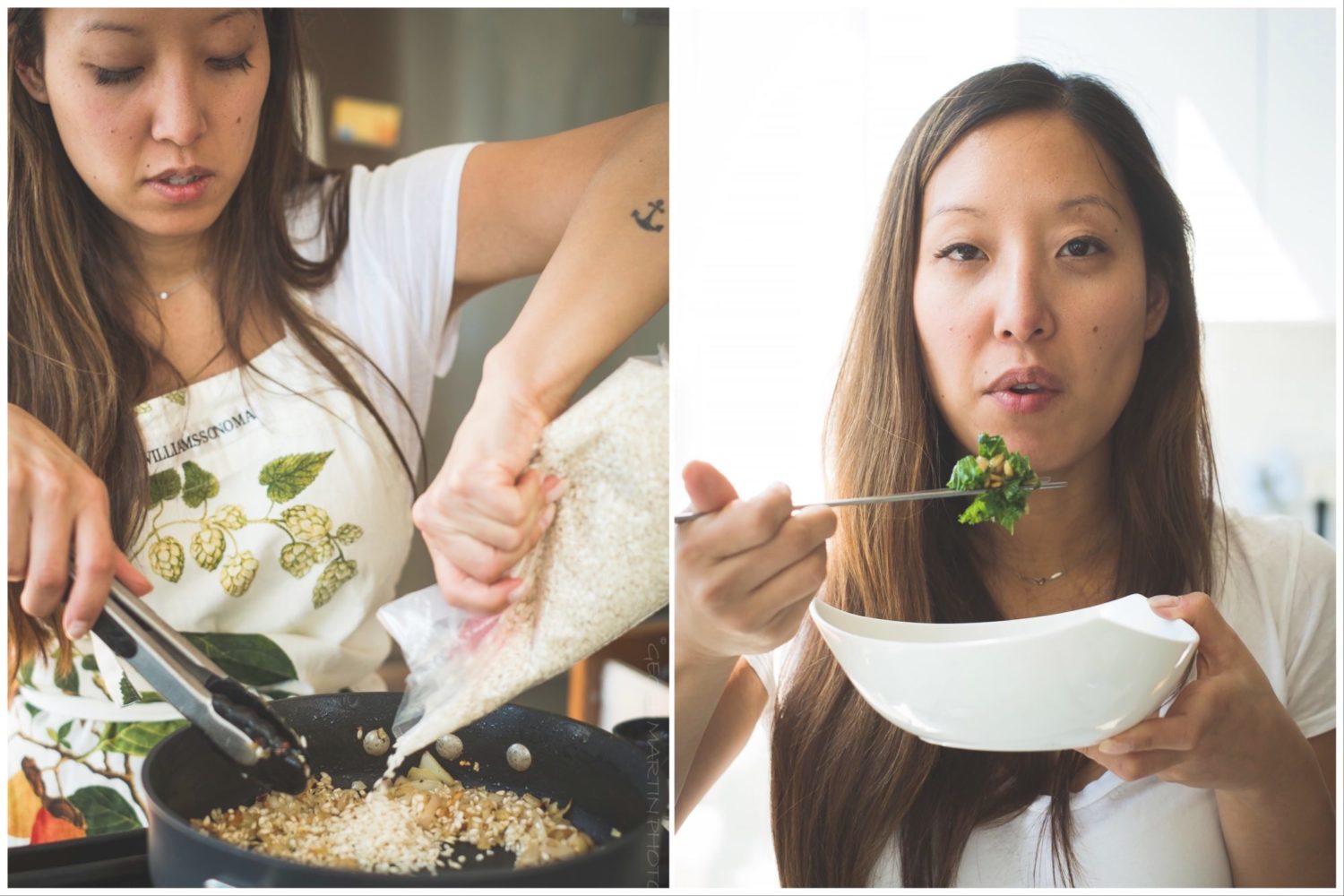 ‘I can fully embrace my love of animals’

Molinaro has a hardline stance now, but her initial decision to ditch animal products was made reluctantly. In part, it was motivated by sheer convenience.

Her then-boyfriend (now husband) went plant-based after reading Rich Roll’s Finding Ultra, and she was tired of cooking two different meals. “I was like, well, it would probably be easier just to go vegan, than to try and do this separately. There was no emotional, cathartic thing, really,” she explains.

But she is making up for that initial lack of emotion with her fervent passion for the vegan lifestyle now. She’s a staunch animal lover, to the point where she can’t bear to see them on TV for fear of witnessing them in any sort of pain.

“[Before] I was like, I can’t be vegan, but I’ll take care of my own dogs the best I possibly can. I always justified it to myself,” she says. “But when I went vegan, especially after like a month of it when I knew this is my life now, it was so liberating to finally be like, ‘oh! I can fully embrace my love of animals.”

While 2019’s holiday season was a family affair, filled with love and home-cooking, Molinaro openly admits that it was also challenging. Her love for animals has made her firmer in her vegan values, but her family doesn’t see the world the way she does. It can be painful, particularly during the holidays, when food is a main event.

But despite her sadness, she is understanding. Back when she was considering going vegan, Molinaro was also cynical, afraid the lifestyle would jeopardize one of the main connections to her Korean culture.

Molinaro grew up in the United States; her parents, immigrants from South Korea, moved to the country in the 1970s. Both sets of grandparents came too, and while her parents worked, her two grandmothers looked after her and cooked her meals. She credits them with helping her keep strong ties to her culture. Her diet, she says, was “100-percent Korean.”

Even then, her meals weren’t too animal-product-heavy, save for fish. Her mother’s mother was a farmer, and their backyard was filled with fresh vegetables.

But despite eating an abundance of plant-based foods in her adult life, including tofu and soy products, Molinaro feared that going vegan would mean giving up a part of herself. She saw the lifestyle as predominantly white, Western, and filled with lackluster kale salads.

That preconception was unfortunately solidified after a trip to a nutritionist who gave her a list of vegan foods to eat, all of which she saw as unappealing. “I always associated veganism with ‘white healthy.’ That’s what I thought. I was like, I can’t be vegan. I cannot eat kale. My diet cannot be kale salad.”

She decided that if she was going vegan, it would be Korean vegan. So she hunted for bloggers to help her along in her new food journey. “There was like one or two,” she recalls. “It was not like the plethora of other kinds of vegan blogs out there. I was like, fine. Then I’ll do it. I’ll veganize the Korean food. Because I need to — how else am I going to survive?”

Molinaro has undeniably found her way from resistance to complete devotion to the vegan lifestyle, but she accepts the journey is not as easy for older Korean people. Conflict around food, at the holidays and beyond, stems not from ignorance but a survival instinct, she explains. In the 1950s, Molinaro’s parents lived through the Korean War. And because they spent many years starving because of it, they see food differently than many of us.

Her father is now living with cancer, which has encouraged him to make changes to his diet. He was diagnosed around the time Molinaro started considering veganism. An event that she says, along with her husband and the inconvenience of extra cooking, helped “clinch” her decision to give the lifestyle a shot. (“I felt like it was kind of a sign. By that time, I had already done a lot of research about cancer and red meat,” she notes.)

But for other members of her family, boycotting certain foods still brings back painful memories from Korea’s past.“They’re like, ‘No. We need meat to survive,’” she says. “I don’t know how to un-educate them from that.”

Plant-based food is the future

Despite resistance from older generations, younger people in Korea — who are living without first-hand memories of the war — are opening their minds (and mouths) to plant-based food, says Molinaro.

A recent study found that the country’s vegan population has tripled. Interest in flexitarianism is on the rise too. The Korea Vegetarian Union told Hong Kong-based Green Queen that as many as 10 million people are reducing their intake of animal products.

Molinaro has high hopes for a future where, globally, vegan food is the mainstream, with companies like Beyond Meat, Impossible Foods, and Eat Just accelerating growth.

Not only for the animals but for the planet. Animal agriculture is extremely resource-intensive and emits huge amounts of greenhouse gases. “Hopefully, we’ll get to a position in a few decades, particularly from an environmental perspective, where we are significantly less reliant on animal products for our food,” she says.

As we all try our best to enjoy a different kind of holiday season this year, it’s important to remember that the New Year is a chance for new opportunities. The future is a chance to build a more inclusive community around the vegan lifestyle, notes Molinaro. Animals and the planet are, without a doubt, worth fighting for. But looking after our fellow humans should be high on the list too, Molinaro believes.

She’s passionate about animal rights, but notes that limiting veganism to only one fight is doing the movement a “disservice.” It’s a conclusion she’s come to, in part, due to the recent Black Lives Matter protests and the growing conversation around global inequalities and systemic racism.

“We need to not just think about what [the food system] is doing to animals,” Molinaro says. “We also need to include humans in that conversation.”

According to Molinaro, respecting cultural and generational differences, understanding complex histories, and recognizing privilege is fundamental to the growth of the vegan movement.

She refers to one incident that hurt her deeply: when a high-profile vegan influencer posted an offensive, racist meme on social media.

“It was about meat-eaters always saying that vegan food looks disgusting, and then they eat this,” she recalls. “It was a picture of a traditional Chinese hot pot dish or something. It was him basically making fun of Chinese food. [And that] dish is actually very vegetarian-friendly. So first, educate yourself. And second of all, you’re not doing anyone favors by doing this. And now you have basically painted vegans as racist.”

Her point brings to mind other recent instances of racism among the vegan community.

After a potential link between a Chinese live animal market and COVID-19 was revealed, social and mainstream media was rife with xenophobic comments and tweets. But wildlife markets aren’t exclusive to Asia; New York City alone has 80. And the pandemic risk from global factory farms is just as high as that from the wildlife trade. But all this didn’t stop many from pointing the finger at “medieval” China’s eating habits.

For Molinaro, the meme incident gave rise to an extremely uncomfortable situation. “I don’t believe in eating meat, but now my people, from my own culture, think that I’m racist against myself because I’m vegan?” She adds: “It was horrible.”

So how do we move forward? Molinaro says it starts, simply, with respect. “Always be respectful of people’s cultures,” she adds. “You can disagree with people eating meat, while still being respectful of their cultural foods.”

Make This Vegan Singaporean Chow Mein in Under 30 Minutes

12 Ways to be a Vegan and Still Eat ‘Chicken’