Earlier this year, the “Joker” star rescued a cow and her calf from a slaughterhouse in Southern California, just hours after giving a moving Oscars speech about animal rights.

The cow and her calf—Phoenix named the mom “Liberty” and the calf “Indigo”—now live at Farm Sanctuary in Acton, California.

“With help from actor and activist Joaquin Phoenix, we welcomed the pair to our Southern California shelter,” Farm Sanctuary said in a statement. “This is Liberty’s first Mother’s Day, and we look forward to many more to come!”

“Dear Friend, […] a few months ago, I helped rescue a cow and her newborn baby calf,” Phoenix wrote in a letter for the sanctuary. “Liberty was pregnant when she was set to be slaughtered. An incredible set of circumstances […] led to this beautiful pair being rescued by LA Animal Save and Farm Sanctuary.” 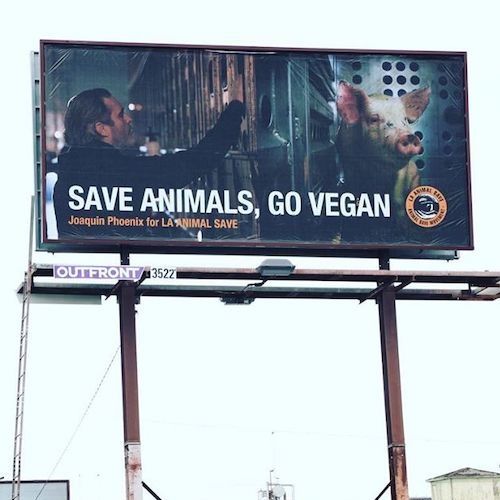 Oscar-winner Joaquin Phoenix is the face of a new vegan ad.

Joaquin Phoenix Speaks Up For Animals

This isn’t the first time Phoenix has lent his support to animals. Along with his fiancée, Rooney Mara, he spoke out against factory farming.

The vegan couple made the comments in an op-ed published in The Washington Post last month.

“China is hardly the only country where live animal markets and other squalid operations are common,” the duo wrote. “Some 80 of them operate within the five boroughs of New York City alone… They are near residences, schools, and public parks.”

Phoenix and Mara added: “Tens of thousands of Americans face threats to their daily health and well-being from neighboring CAFOs. [They also face] animal waste that mists or flows over their properties.”

In March, Phoenix also teamed up with animal rights organizations LA Animal Save and Animal Alliance Network. The organizations launched anti-meat billboards and bench ads in Los Angeles featuring a photo of the Oscar winner at a pig vigil.