Joaquin Phoenix joined an animal rights protest in London ahead of Sunday night’s British Academy Film Award (BAFTA) ceremony. The vegan actor is up for best leading actor for his starring role in Todd Phillips’ “Joker.”

Phoenix joined activists with Animal Equality, a nonprofit that works to end cruelty to farmed animals, at Tower Bridge as they dropped a banner reading “Factory farming destroys our planet. Go vegan.”

“People are not in a panic in the way they should be. These are very dire times and so I felt like I had to do something. We have a responsibility to take action right now,” he told Sky News at the London protest. The actor has been vegan since age three. 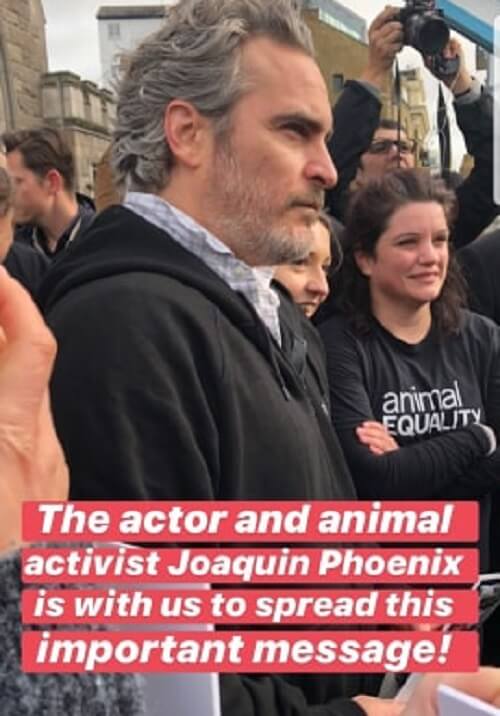 ‘This Is an Emergency’

Phoenix added that he feels the connection between the climate crisis and animal agriculture is “not being talked about enough.”

“This is an emergency,” he said. “We have to do everything we can to try to cut down our impact on climate change.”

Actors who speak out against climate change have faced criticism for their high carbon footprint caused by taking private jets.

Phoenix acknowledged this, stating that “We are all hypocrites in some ways. We all struggle with what the right thing to do is and we make mistakes. The industry does consume a lot of power and a lot of resources so the way to mitigate that for me is to maintain a vegan lifestyle.”

He continued, “Instead of being judgmental and attacking each other, we should try to help each other and educate each other about how we can change. There are many improvements I can make in my own life and I am trying to do that.”

Phoenix himself has worn the same Stella McCartney tuxedo to every awards ceremony this season, rather than wear a new outfit to every event, to further lower his carbon footprint. Fashion is one of the most polluting industries in the world.

It has been a successful awards season for the 45-year-old actor. Phoenix took home the best actor award at the Golden Globes, Screen Actors Guild (SAG) Awards, and the Critics’ Choice Awards. He is a favorite contender for “Best Actor” at the Academy Awards next Sunday.

After winning the SAG award for Best Male Actor in a Leading Role, he attended a vigil outside of a slaughterhouse, still wearing his tuxedo. When asked why he attended, the actor replied “Because I have to. Most people don’t really know of the torture and murder in the meat and dairy industry.” 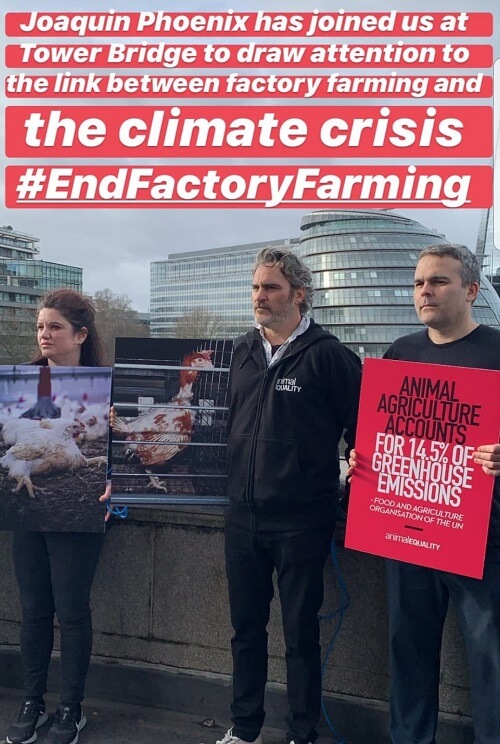 Joaquin Phoenix: “We have to do everything we can.” | Animal Equality

Some ceremonies have gotten the message. The Golden Globes set a precedent for others by serving an entirely plant-based menu, thanks to Phoenix and his fiancee, vegan actor Rooney Mara. The “Joker” star thanked the Hollywood Foreign Press Association (HFPA) during his Best Actor in a Drama award acceptance speech for “recognizing and acknowledging the link between animal agriculture and climate change.”

The Critics’ Choice Awards also served a vegan menu to lower its carbon footprint as well. The 92nd Academy Awards will serve vegan food at its luncheon and a 70 percent plant-based menu at the Governors Ball, which immediately follows the ceremony. The 73rd BAFTA ceremony hasn’t cut animal products from the menu, but will serve a vegan starter and dessert.