Academy Award-winning actor Fonda has hosted weekly rallies, dubbed “Fire Drill Fridays,” in Washington D.C. since last October. The “Grace and Frankie” star introduced Phoenix as “one of the greatest living actors today” before inviting him to join her onstage.

‘There’s Something You Can Do Today’

While Fonda said that Phoenix wasn’t going to speak, the “Joker” star took the opportunity to call attention to the link between animal agriculture and the climate crisis.

“Something I think isn’t oftentimes talked about in the environmental movement or in the conversation about climate change is that the meat and dairy industry is the third leading cause of climate change,” he said.

Phoenix continued, “I think sometimes we wonder what we can do in this fight against climate change and there’s something that you can do today, right now, and tomorrow, by making a choice about what you consume.”

The actor — who has been vegan since the age of three — and his partner Rooney Mara are reportedly the reason why this year’s Golden Globe Awards served a plant-based menu.

Phoenix thanked the Hollywood Foreign Press Association for making the last-minute change during his Best Actor acceptance speech. “It really sends a powerful message,” he said.

Per Variety, police also arrested Martin Sheen at the rally. Fonda was not arrested this time, but the longtime political activist has been cuffed five times since the Fire Drill Fridays rallies kicked off.

Other high-profile arrests since October include Fonda’s “Grace and Frankie” costar Sam Waterson, Sally Field, Ted Danson, and Diane Lane. In total, police arrested 147 activists at the Friday protest. According to Fonda, the first rally had “maybe 20 people.” She added, “we’re building an army, people!”

All were arrested for unlawfully demonstrating. They were charged with crowding and obstructing or incommoding.

Activists also occupied a Chase bank in Washington to protest its funding of pipelines, including the Keystone XL.

On the Twitter account, Fonda said it would be her last protest in Washington for a while. But it won’t be her last climate change rally. 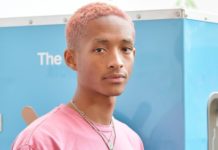